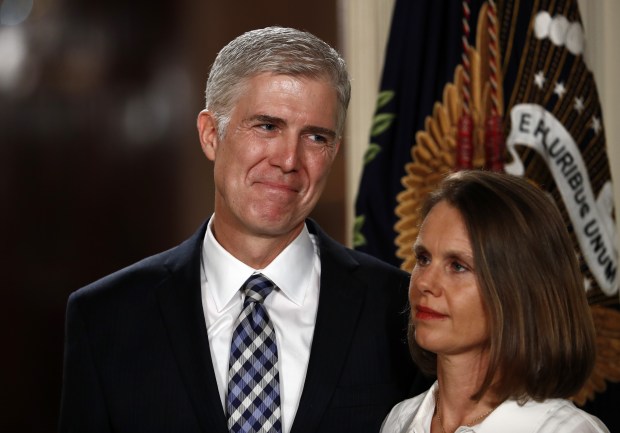 Richard Spencer6 years ago33 comments
Judge Neil Gorsuch stands with his wife Louise as President Donald Trump speaks in the East Room of the White House in Washington, Tuesday, Jan. 31, 2017, to announce Gorsuch as his nominee for the Supreme Court.(AP Photo/Carolyn Kaster)

Neil Gorsuch is the first Anglo-Saxon Protestant to be nominated to the Supreme Court in my lifetime.1 As with so much with Trump, symbolism is more important . . . more powerful . . . more triggering . . . perhaps more lasting . . . than his actual policies.

In the realm of politics and coalition-building, Gorsuch is a bone thrown to the Bow-Tie Brigade (the “conservative movement”) and the Holy Rollers (the “Religious Right”). Gorsuch is an “originalist,” which means that he would likely vote to overturn Roe v. Wade. He was on the side of angels in the “religious freedom” debates of the past five years and wrote a book rejecting euthanasia.

Evangelical voters (if not all of their leaders) went enthusiastically for Trump, despite the fact that he was not one them. “Movement conservatives,” on the other hand, were overwhelmingly hostile, though over the past three months, they’ve granted Trump their begrudging, suspicious acceptance. With the Gorsuch pick, Trump shored up both camps, for the time being . . .

But the real meaning of Gorsuch is his identity.

Neil Gorsuch is a WASP, and not just any WASP; he’s nothing less than an American archetype. He is handsome, intelligent, and down-to-earth, if not charismatic or scintillating. He is a family man and avid outdoorsman, skier, and fisherman, not just an intellectual but a man at home in the West. I imagine him wearing an Orvis blazer or Patagonia fleece vest underneath the dark robes of the Court.

The surname “Gorsuch” has a funny ring to it, but it derives from a hamlet in Lancashire. Neil Gorsuch was raised Catholic, but he is now Episcopalian. The Church of England was known by its detractors as the “Tory Party at Prayer.” It is a national Catholicism, which avoids the extremism of Geneva while maintaining the high culture of Rome. Episcopalianism, the Church’s offshoot in the New World, is thus the religion of America’s rightful ruling-class . . . or rather a ruling class that would have been rightful if it hadn’t begun loathing itself and mistaking its transcendence for what was, in fact, its suicide.

Wisconsin Governor Scott Walker once joked that he was “aggressively normal,” by which he meant “boring.” Gorsuch is truly normal, not in the sense of “average” or “mediocre” but as an expression of a norm or ideal.

Until last spring, the Court was comprised of four justices generally considered conservative or originalist (Samuel Alito, John Roberts, Clarence Thomas, and Antonin Scalia) and five that were moderate-to-liberal (Stephen Breyer, Ruth Bader Ginsburg, Elena Kagan, Anthony Kennedy, and Sonia Sotomayor). Three of the nine are Jewish; the remaining six are/were Catholic. Dramatic over-representation for both groups! All conservative judges are Catholics; all Jewish Justices are liberals. The last Protestant Justice, the moderate John Paul Stevens, was nominated by Gerald Ford, and succeeded by the left-wing Jew Elena Kagan.

The Supreme Court exists as a kind of inner sanctum of the Establishment. Though jurists of Left and Right claim to possess “timeless” or “true” judicial philosophies, the reality is that institutions like the Court exist to rationalize and legitimize—always post facto— government power and major social and cultural trends.

Conservatives remind us of how the Authors of the Constitution never would have imagined a right to an abortion in the Constitution, which, of course, is true. But then the Founders would have been horrified by the notion of women and Africans voting . . . interracial marriage . . . no-fault divorce . . . midgets given equal rights . . . and much more.

“Originalism,” the favored legal philosophy of the Beltway Right, is thus a kind of naïve—or willfully blind—conservatism. Instead of maintaining a social world and hierarchy, “originalists” fetishize old documents. Patting themselves on the back for their “correct” interpretations of rights and liberties, they forget how much they’ve lost.

I would hope that a wise Latina woman with the richness of her experiences would more often than not reach a better conclusion than a white male who hasn’t lived that life.

Sotomayor presented herself, not as some stuffy, out-of-touch WASP, but as new type of Justice, one with empathy, compassion, and an eye towards social justice. At the end of the day, she was really symbol of the Establishment’s approval of the demographic transformation of the American nation, and its acceptance of new members in the most exclusive club of all.

But it is, contra Sotomayor, an Anglo-Saxon who can properly claim to understand the law in his very bones—to understand, not merely words, but what they are meant to defend, uphold, and rebuke . . . and when and where the laws should be broken.

Gorsuch isn’t this type of leader, to be sure. For the time being, he can act as America’s wise, WASPy dad—an avatar of the ruling class of days gone by.