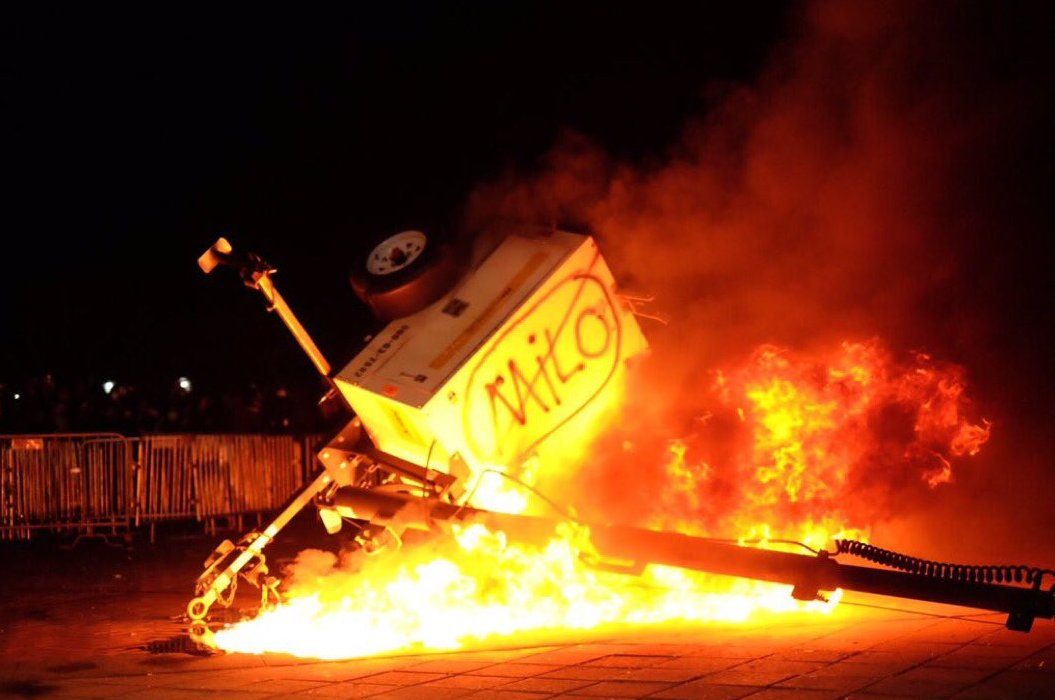 MILO Shut Down At Berkeley

As I was telling Professor Main this afternoon, the Left isn’t synonymous with liberalism anymore:

"No Trump, no KKK, no Fascist USA!" the crowd chants as they block the door. #MiloAtCal pic.twitter.com/I9p58V5uGc

Look how well disavowing did

Surely Antifa wouldn't be embolden and take it to next level….. pic.twitter.com/3WMoTATn6A

Some students block the door of the Student Union. #MiloAtCal pic.twitter.com/GsFm9H9aIU

My friend was giving an interview when some coward peppersprayed her #Berkeley pic.twitter.com/CDpEqDsw2A

Woman Is Victim of Apparent Unprovoked Attack at #UCBerkeleyRiots; Witness Says She Was Also Pepper-Sprayed pic.twitter.com/AuC9NGBgda

The progressive Left has become infected by various non-liberal authoritarian ideologies like Marxism, postmodernism and critical race theory. What you saw on display tonight at UC Berkeley was Herbert Marcuse’s doctrine of “repressive tolerance” in full bloom.

Frankly, these people are not “liberals” anymore in any real sense of the term. Free speech? Tolerance? Freedom of assembly? Free inquiry? Neutrality? Equality? Freedom? The taboo on political violence? It’s all gone in a veritable bonfire of political violence. BTW, the classical definition of a “bigot” is someone who is “intolerant toward those holding different opinions.”

Do you know what I did when MILO gave a speech at Auburn? I ignored him because I don’t give a damn if he has a different point of view. I don’t care. It doesn’t bother me. I don’t believe that is a legitimate reason to riot in the streets and disturb the peace of my community. I also think it says a lot about these people that they are incapable of engaging in a civil exchange of views.

It’s actually pretty funny because I am supposedly the “fascist.” And yet, I am more of a *liberal* than these people. You have never seen me rioting in the streets, trying to beat up someone, wearing a mask and acting like a street thug, harassing people at hotels, haranguing innocent pedestrians, trying to get people fired from their jobs, smashing windows, throwing rocks at police officers, etc.

In the 21st century, there are political riots at UC Berkeley and shootings at the University of Washington. Such a thing would never happen in Mississippi or Alabama in 2017!

Note: The Left is plainly violating the norms of liberalism here. They’re establishing themselves as a new orthodoxy. They are as violent as any religious sect.