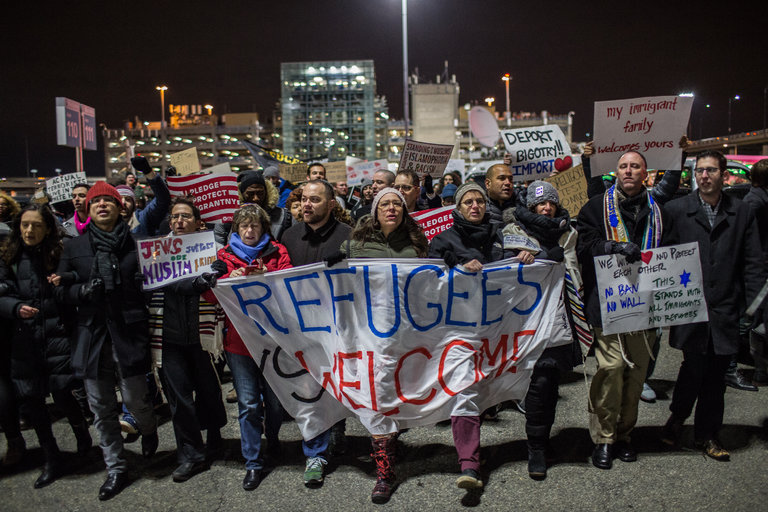 Yesterday, I was on the road and didn’t get home until late last night, so I missed the big uproar over Trump’s executive order on refugees and visas:

“Washington (CNN) With just a few quick strokes of the pen, President Donald Trump on Friday banned — temporarily, for now — more than 134 million people from entering the United States.

Trump barred citizens of seven Muslim-majority countries from entering the US for at least the next 90 days by executive order, which a senior White House official said later Friday is likely just a first step toward establishing a broader ban.

Asked what criteria the administration will consider as it looks to expand the ban beyond the initial seven countries, the official said simply the “mandate is to keep America safe.” …”

As David French points out, it is not a sweeping Muslim ban. It is only a temporary fix and barely changes the number of refugees admitted to the United States:

Read the full text of the executive order.

President Trump appears to be testing the waters here. He’s ginning up hysteria over something really small and quite moderate. The White House has said this is “just a first step.” Regardless, a federal judge has already pounced and blocked part of the order:

“WASHINGTON — A federal judge in Brooklyn came to the aid of scores of refugees and others who were trapped at airports across the United States on Saturday after an executive order signed by President Trump, which sought to keep many foreigners from entering the country, led to chaotic scenes across the globe.

The judge’s ruling blocked part of the president’s actions, preventing the government from deporting some arrivals who found themselves ensnared by the presidential order. But it stopped short of letting them into the country or issuing a broader ruling on the constitutionality of Mr. Trump’s actions.

The high-stakes legal case played out on Saturday amid global turmoil, as the executive order signed by the president slammed shut the borders of the United States for an Iranian scientist headed to a lab in Massachusetts, a Syrian refugee family headed to a new life in Ohio and countless others across the world. …”

The block only covers a handful of people who were caught in transit. It doesn’t affect anyone who hasn’t yet traveled to the United States. Still, the Fake News media is showering Judge Ann Donnelly with praise in order to encourage more federal judges to subvert President Trump’s immigration agenda:

“Andrew M. Lankler, a partner at Baker Botts LLP, who served in the office from 1990 to 1996, said, “She’s an extremely intelligent, deliberative and conscientious person uniquely unswayed by anything other than justice.”

Daniel J. Horwitz, a partner at McLaughlin & Stern LLP, who worked in the district attorney’s office from 1991 to 2000, described her in a message as “tenacious, exceedingly bright but eminently fair with an even temperament.”

He added, “She’s exactly the type of judge you want to appear in front of.” …”

I promise that our administration will ALWAYS have your back. We will ALWAYS be with you! pic.twitter.com/D0aOWhOH4X

I’ve got some catching up to do on this.

Yesterday, I was with Michael Cushman and several other veterans of the League of the South’s Murfreesboro and Shelbyville protests. We were sitting around drinking whiskey, smoking cigars in a hotel lobby and taking pictures standing in front of a television as the CNN chyron breathlessly reported “Trump Bans More Than 134 Million People.” There was a meltdown going on at JFK Airport.

No, this executive order wasn’t as sweeping as I would have liked, but I am a realist. This issue was inevitably going to be fought and resolved in the federal courts. It makes sense to me to prod the Left into having a big meltdown now. The public will become accustomed to the outrage and once the sweeping principle is established that the president can unilaterally ban anyone traveling from a foreign country the policy can always be broadened later to encompass more countries.

Why do we need, say, Somalians? That’s a good place to start.