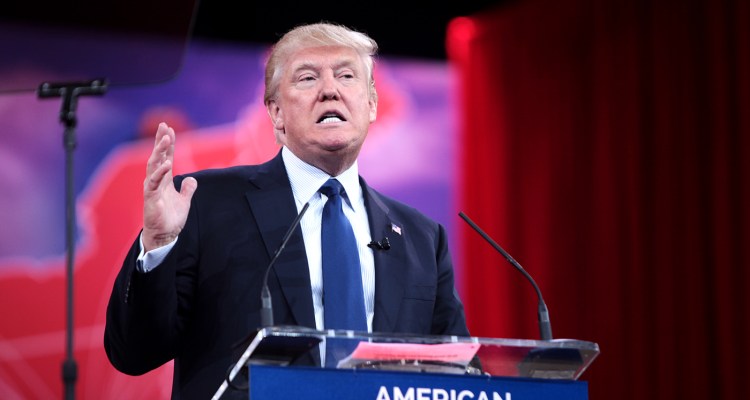 This week, the activist Jewish community in the United States forcefully reminded the world that, no matter how much we might moralize the Holocaust, no matter how much we might glean from it lessons about man’s fallen state or dehumanization in the modern world, the Holocaust is all about the Jews. It is all about their meta-narrative of suffering, and it shall undergird their peculiar position in American society, and theirs alone.

In 2005, the UN deemed January 27 to be International Holocaust Remembrance Day, and the occasion has annually elicited soulful statements by sitting presidents. President Trump’s press release was as seemingly banal as any other:

“It is with a heavy heart and somber mind that we remember and honor the victims, survivors, heroes of the Holocaust. It is impossible to fully fathom the depravity and horror inflicted on innocent people by Nazi terror.

“Yet, we know that in the darkest hours of humanity, light shines the brightest. As we remember those who died, we are deeply grateful to those who risked their lives to save the innocent.

“In the name of the perished, I pledge to do everything in my power throughout my Presidency, and my life, to ensure that the forces of evil never again defeat the powers of good. Together, we will make love and tolerance prevalent throughout the world.”

But the kvetching came quickly. . .

1/2 @WhiteHouse statement on #HolocaustMemorialDay, misses that it was six million Jews who perished, not just ‘innocent people’ pic.twitter.com/OXiFqcPi4V

2/2 Puzzling and troubling @WhiteHouse #HolocaustMemorialDay stmt has no mention of Jews. GOP and Dem. presidents have done so in the past. pic.twitter.com/BvZVVoPUSi

This is not an accidental omission. He is generalizing the Holocaust the way the Iranian govt or Neo-Nazis do. There’s a purpose behind it. https://t.co/Gf9s7mh8fd

Hitler and the Holocaust are the negative moral center of the liberal universe.

In The Brothers Karamazov, Dostoyevsky famously put forth the maxim that “Without God, all is permitted.” That is, without a singular moral authority, life descends into hedonistic violence, nihilism, chaos, and degeneracy.

Dostoyevski didn’t quite foresee that the post-God 21st century—the American Age and “End of History”—would arrive at its own hyper-morality, this time as a negation: “Because Hitler, everything is forbidden.”[1]

We can’t limit immigration, because Hitler. We can’t be proud of ourselves as a Europeans, because Holocaust. White people can be Christian, but not too Christian, because Auschwitz. Und so weiter . . . Effectively, any policy, idea, or belief that is markedly right-wing and traditional—that evokes identity, power, hierarchy, and dominance—must be regulated by the possibility that it could potentially lead back to the German Führer.

This trend leaves activist Jews in a difficult position. Hitler and the Holocaust define postmodern global morality, and yet both have peculiar resonances for Jews, in particular, for their senses of identity and “apartness” from European society. Thus, there has always been an uncertainty and worry over the spread and predominance of “Because Hitler. . . morality.” In academia, the rise of “genocide studies” (I was actually a Teaching Assistant for such a course in grad school) has, on the one hand, cemented the Holocaust as the moral paradigm . . . and simultaneously threatened its uniqueness, threatened to make the Holocaust “just another genocide,” which is unimaginable for Jewish activists.

Trump’s statement on Holocaust Memorial Day is, on the surface, utterly defensible within the current moral paradigm: Hitler is depicted as quintessential evil, with modern society revolving around this dark center. But when viewed from the perspective of Jewish activists, Trump’s statement becomes outrageous, as it dethrones Jews from a special position in the universe.

It is especially Trumpian of Trump to bring this contradiction to the fore.

The Trump administration has doubled-down on its “de-Judification” of the Holocaust.

The White House statement on International Holocaust Remembrance Day didn’t mention Jews or anti-Semitism because “despite what the media reports, we are an incredibly inclusive group and we took into account all of those who suffered,” administration spokeswoman Hope Hicks told CNN on Saturday.

Hicks provided a link to a Huffington Post UK story noting that while 6 million Jews were killed by the Nazis, 5 million others were also slaughtered during Adolf Hitler’s genocide, including “priests, gypsies, people with mental or physical disabilities, communists, trade unionists, Jehovah’s Witnesses, anarchists, Poles and other Slavic peoples, and resistance fighters.”

Asked if the White House was suggesting President Donald Trump didn’t mention Jews as victims of the Holocaust because he didn’t want to offend the other people the Nazis targeted and killed, Hicks replied, “it was our honor to issue a statement in remembrance of this important day.”