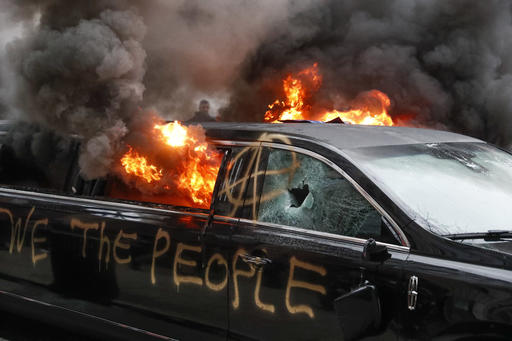 This past week of President Trump’s inauguration, we’ve seen serious escalation from various elements of the Left against right-wingers in various cities.

Trump supporters have been targeted, set on fire, beaten with metal pipes, punched for putting out fires that Leftists created, and our own Richard Spencer was attacked in the most limp-wristed, cowardly fashion—sucker-punched during an interview for a documentary while the rioters around him hold signs proclaiming that “White Lives Matter Too Much.” How refreshingly honest. I, for one, thank them for making explicit the implicit subtext of their ideology.

These events mark a serious escalation in “direct action” tactics used by the more extreme Left-wingers (they were comprised of everything from Anarchists to Communists) against those on the Right, targeting everyone from normal, everyday Trump supporters to Alt-Right leaders. This wasn’t one “radical” movement against another; this was a wake-up call to the entire Right that they consider all Rightists to be evil. Frank Luntz, one of the most weak-willed, milquetoast Republicans to exist on the Paul Ryan-Lindsay Graham cuck spectrum was attacked for being a “fascist.” How utterly bonkers! But the message being delivered is simple: it doesn’t matter how many times you DR^3 (Dems R the Real Racists), how often you give minorities special privileges & access to resources, or discuss getting minorities off the Democrat “plantation,” the result is the same: you get a punch in the face. Those who were engaging in these actions see you as just as evil as those who they believe are members of a now defunct 1930’s German worker’s party.

Beyond the street violence, it was the reaction of the mainstream Left that was the most eye-opening and the most damning revelation of this increased expectation of violence. Mainstream Left sites such as the Independent celebrated the attacks, particularly the one on Richard (they have since deleted the article, but the Internet never forgets). The New York Times at least rhetorically pondered whether such an action was acceptable (naturally, they decided that it is). Haaretz, a Jewish website, was also on the “Yes” train for physical violence against “Nazis”. While never defining what makes one a Nazi, we can safely assume that recognition of race realism is sufficient for both the members of the Black Bloc that were attacking Rightists as well as those in the mainstream Left who celebrated the street violence. For most Jews, acknowledgement of the JQ, the “Jewish Question” of egregiously outsized Jewish power in gentile politics, media, academia, finance, and law is enough. As we can see by the attacks on everyone from Lauren Southern to Frank Luntz, the Left’s definition of a modern day “Nazi” is quite a bit more expansive than our own.

The goal of these “Antifa” is to prevent the “normalization” of the Alt-Right and of ethno-nationalist politics. We are riding the wave of resurgent Nationalism in America, and all those who consider themselves “Antifa” can sense that the Alt-Right is gaining a foothold in the American political scene. Dismayed by their prospects of debating us in the realm of ideas, they thus decide that the best way to drive us back underground is to threaten us physically. We are perceived as the first real threat to the managerial neo-liberal order since the Cold War, fighting against it from within like antibodies fighting off a virus.

In effect, this makes Antifa a wholly establishment organization. They LARP as anti-establishment radicals while defending the System they profess to want to overthrow. They yell “Burn the banks!” while they attack those people who would likely do more to reign in the financial system than almost anyone else. Many have outright left behind the Marxism of yesteryear, trading in class solidarity for lifestyle identity & only non-White ethnic interests. Hillary Clinton actually ended up playing many of these people like the fools they are:

“Not everything is about an economic theory, right?” Clinton said. “If we broke up the big banks tomorrow—and I will if they deserve it, if they pose a systemic risk, I will—would that end racism?”

“No!” the audience yelled back.

Clinton continued to list scenarios, asking: “Would that end sexism? Would that end discrimination against the LGBT community? Would that make people feel more welcoming to immigrants overnight?”

To borrow a phrase, these people are pwned. They attack the managerial system’s only real threat in the streets while the neoliberal order marches on. They have become the guardians of the neoliberal galaxy, the shock troops of the bourgeoisie. They are pwned.

What This Means for the Right

The problem in all of this for the Alt-Lite and even for the Cuck Right is that your enemy defines you just as much as you define yourself. As the political philosopher Carl Schmitt discussed in The Concept of the Political, he notes:

The specific political distinction to which political actions and motives can be reduced is that between friend and enemy.

A people exists politically if it constitutes an independent political unity and in the name of this unity opposes itself to other kinds of unity.

Essentially, a people can only be said to exist on the level of the political to the extent that it identifies itself by its opposition to some Other, which does not exist within its own circle. In simpler language, your enemy defines you by exclusion from it. This means that no matter how many times Mike Cernovich and Bill Mitchell “disavows” the Alt-Right and other far-right movements, they will continue to be lumped in with us in opposition to the Left whether they like it or not. Their enemies have already defined them on the level of the Political; they can now either ignore them and their physical assaults (an obviously poor strategy) or choose to work with us against those would-be enemies.

Whether the Alt-Lite and the Cuck Right will do this is ultimately up to them. We can’t force them to work with us, and we can’t force them to stand up alongside us in the future. But if they have a strategic bone in their bodies, they’ll realize the necessity of teaming up with us against a foe that have publicly demonstrated that they are enemies and that they are willing to violently assault them in the streets.

An Ethnostate doesn’t sound half-bad right now, does it?

TopicsViolence
Share on FacebookShare on TwitterShare on RedditShare on VKontakte