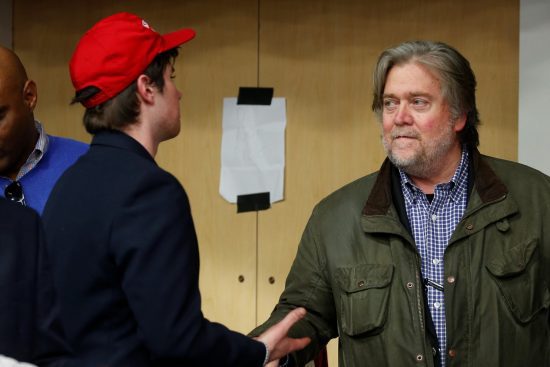 “The chief strategist in the White House, a man who rallied a growing white nationalist movement behind Donald Trump, is now telling the news media to “keep its mouth shut and just listen for a while.”

We should all be outraged – and more than a little unnerved. …

To maintain their propaganda, they must muzzle the institutions that reveal the facts, the objective information that informs policy decisions. Without this information, a democracy simply cannot function.

Without a vigilant press and without the free flow of government information, Trump can lie with impunity. He can govern based on the “alternative facts” he gets from the far-right extremists and conspiracy theorists he apparently follows quite closely.

Voters, meanwhile, will have no way to get the truth. …”

The punditry desperately wanted Hillary to win. They misinterpreted the data. There were oddities like Trump being ahead in Iowa by 7 and Ohio by 5 on the eve of the election which were dismissed and explained away. Iowa and Ohio have traditionally been Midwestern bellwethers. There was clear evidence that the Millennial vote was depressed, that black turnout wouldn’t match the record set in 2012, that Hispanics weren’t alienated by Trump’s racism, that there was an unusually large number of undecided voters and that there was a massive enthusiasm gap. It had also been well known for months that Trump was winning the White working class by an unprecedented margin.

I recall telling my wife on the morning of the election that there was a possibility that California was skewing the popular vote in the national polls and that Trump could win the electoral college. I simply couldn’t see Trump easily winning Ohio and Iowa, but losing Florida or North Carolina. It made no sense to me because state voting patterns are closely aligned.

What does that tell you? If history is our guide, it sounds to me like a Hillary collapse across the Midlands. George W. Bush won Iowa by less than 1 percent in 2004. You would have to go back to Reagan in 1984 to find a Republican winning Iowa by a similar margin.”

I was citing “alternative facts” here like cultural geography and the fact that the stock market was predicting a Trump victory. I also brought up Master Feng who predicted Trump would win the election because he had the feng shui purple energy of the country leader.

Who called the election? Master Feng or Steve Kornacki?