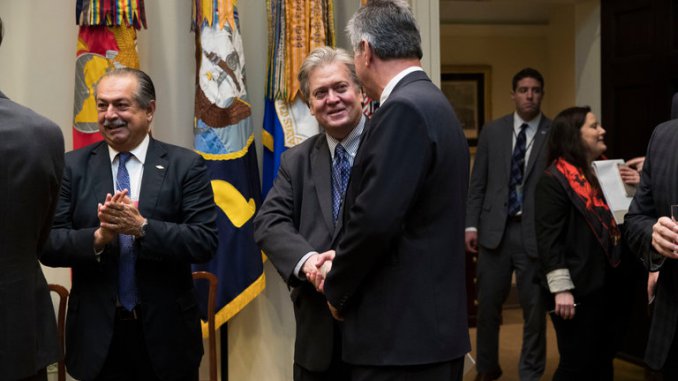 Steve Bannon: The Media Is The Opposition

Steve Bannon more or less declares the Fake News media is the enemy of the Trump administration:

“The media should be embarrassed and humiliated and keep its mouth shut and just listen for awhile,” Mr. Bannon said during a telephone call.

“I want you to quote this,” Mr. Bannon added. “The media here is the opposition party. They don’t understand this country. They still do not understand why Donald Trump is the president of the United States.” …

“The elite media got it dead wrong, 100 percent dead wrong,” Mr. Bannon said of the election, calling it “a humiliating defeat that they will never wash away, that will always be there.”

“The mainstream media has not fired or terminated anyone associated with following our campaign,” Mr. Bannon said. “Look at the Twitter feeds of those people: they were outright activists of the Clinton campaign.” (He did not name specific reporters or editors.)

We need to adopt the same attitude.

Now that Bannon is chief strategist to President Trump, we need to become the media. I will have more to say about this soon. I’ve got a big speech to start writing tonight.