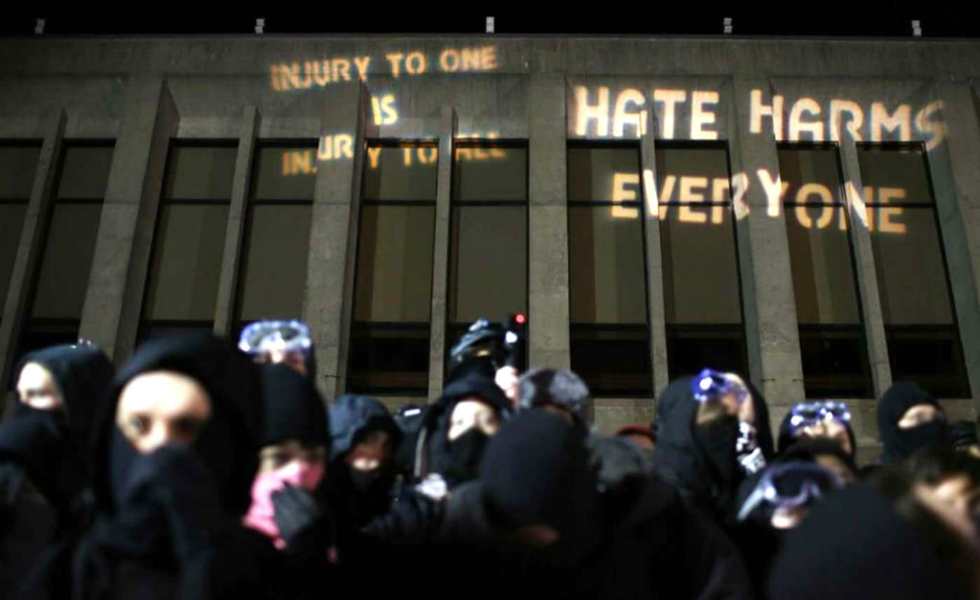 Alex Griswold Is Now A Nazi

Did you know it?

Neither did I, but you learn something new every day:

“The tweet took off, and not in a good way. Literally hundreds of people responded, all saying that they would have loved if the attacker had killed Spencer. Some went further, calling for the extrajudicial killing of all Nazis.

I honestly don’t have room for all the responses along these lines. These are also the polite responses, not the ones calling me a Nazi or calling for my death.

It was an eye-opening reaction. The reason I penned the tweet was because I thought the liberal consensus that serves as the bedrock of the American society was intact. I had this whole spiel planned about how if we as a society endorse violence against one Nazi, we’re responsible if it leads to worse violence, maybe even murder, where do you draw the line, blah blah blah. I thought it was more or less self-evident that you don’t murder people on the street for expressing views you don’t like. I thought we were all the same page, and I was wrong.

What was most depressing is that the pro-violence responses came almost uniformly from liberals. I suppose that isn’t that shocking: 51% of modern Democrats believe the government should ban hateful speech entirely. …”

I’ve been saying it for a long time.

Civic Nationalism isn’t going to work. Americanism used to be a combination of whiteness, Christianity and liberal republicanism. Actually, the American identity used to be more like Northwestern European (Nordic), Protestantism and liberal republicanism until it was broadened to include the descendants of immigrants who came over during the Great Wave. Then it became whiteness and Christianity to accommodate the Jews and Southern and Eastern European Catholics.

The Cold War redefined Americanism by decoupling whiteness, the traditional bedrock of national solidarity, from liberal republicanism. For the first time in history, America was transformed into a “universal nation,” a kind of miniature United Nations, which would lead the “Free World.” At this point, Americanism was a creed which still heavily leaned on Christianity, but once the Cold War was won and the Soviet Union fell religion ceased to be a point of national solidarity too.

By the 21st century, Americanism had become nothing but an “idea.” The United States was said to be a “proposition nation.” In other words, Americans are people who live in a geographic territory who share the same ideology. The problem with this model, however, is that ideology is a poor source of national solidarity. Ideologues are notoriously sectarian. Within the United States, liberal republicanism splintered into a Right that was for “freedom” and a Left that was for “equality.”

In the political mainstream, the only thing good in this country is more freedom or more equality. That is your choice in every election. There is nothing else worthwhile in life. The problem is that liberty and equality are both like acid to any established social order. They dissolve the social fabric by weakening social bonds. Eventually, liberal republicanism in its most advanced stage, which is to say, when liberty and equality are taken to the greatest extremes, destroys any sense of national solidarity.

The Left’s latest bright idea is to jettison liberal republicanism from Americanism – ideology, the final point of national solidarity, and the last and weakest source of national cohesion. We’re told that some classes of citizens are so dangerous that they should be subjected to vigilante violence. It is legitimate to violate their constitutional rights. This caste of people are Deplorables and their ideas are so dangerous that they shouldn’t be tolerated. That’s where the mainstream Left is at in 2017.

You may have noticed that “liberal republicanism” or “civic nationalism” has become increasingly meaningless on the Left. Traditionally, liberal republicanism has meant a republican form of government coupled with ideas about individual rights. As the theory goes, the government exists to secure those rights, but in the 21st century the Left is no longer synonymous with liberalism. The Left has been infected by other more authoritarian strains of leftwing thought like Marxism and critical race theory.

Many of these leftists, who call themselves “progressives” in order to distinguish their views from “liberals,” believe in banning “hate speech” and what they call “no platforming.” They believe in violently assaulting their fellow citizens for political reasons. They support criminal conspiracies to deny rightwingers, not merely the Alt-Right but the Right as a whole, their constitutional rights.

Ultimately, the logic of “social justice” is leading us down the road to civil war. When you reserve the right to violently assault your fellow “citizens” and/or deprive them of their constitutional rights, the status of “citizen” has become meaningless. It is no longer a point of solidarity. What’s left to hold the nation together at that point? What does it even mean anymore to be an American?

Perhaps I am discounting the possibility that sixty million people will submit to the caste-based, politically correct, social justice dictatorship that progressives are striving to implement in Washington. I’m skeptical that model of Americanism will work though.