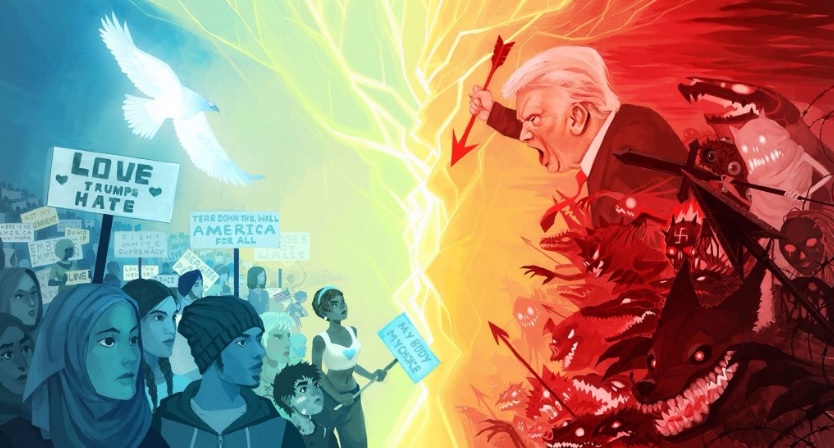 “The Trump Wars of the past 18 months do not now go away. Now it becomes the Trump Civil War, every day, with Democrats trying to get rid of him and half the country pushing back. To reduce it to the essentials: As long as Mr. Trump’s party holds the House, it will be a standoff. If the Democrats take the House, they will move to oust him.

Because we are divided. We are two nations, maybe more. …”

This is the reality that President Trump will be facing.

We can have happy talk about finding a new solidarity in civic nationalism, but our common culture has already been so disintegrated by liberalism that force is the only thing really holding this country together. We saw that on display in Washington, DC where we had to spend hours walking around the barricades. Because of the confluence of multiculturalism, immigration and Islamic terrorism, the TSA had to cage us in like animals in our own Capitol to protect us from foreign and domestic enemies.

It is striking how the Left no longer accepts the norms of civic nationalism: free and fair elections, peaceful transfer of power, free speech, tolerance of dissenting views, the taboo on political violence, equality before the law, the rule of law and order, the value of citizenship, etc. In the name of social justice, the Left ardently believes we ought to do away with all of these things and violently impose a new orthodoxy of -isms and -phobias on the country. The PC Left now has the witch hunting mindset and zeal of the inquisitor armed with the faggot and the stake. They see themselves as being on the sides of the saints and the martyrs while their opponents on the Right are an army of demons.

“The word of the day is “polarized.” The New York Times declared that Donald Trump “will take command of a country unsettled after one of the most polarizing periods in modern times.” ABC’s chief political analyst went even further, arguing that the level of division was so bad that our political culture was “much more akin to where we were in 1861.” Writing in the Washington Post, Philip Bump rightly noted that Trump “didn’t create the country’s divisions” before wondering: “Will he heal them?” The answer:

This polarization has been a long time coming; anyone with eyes could have predicted it. I’m 47 years old, at the age when my law-school peers have grown up to sit in the halls of corporate, academic, and governmental power. And what were those peers like? Twenty-five years ago, some of them were in Harvard Law School, literally shouting down conservatives, booing them and jeering them when they dared open their mouths. They had no regard for civility or debate. They only wanted to win. And Harvard wasn’t alone. A generation of liberal elites has grown up steeped in a culture that believes that millions of fellow Americans aren’t just wrong, but evil — racist, sexist, homophobic, and drawn to religious faith as a vehicle for their bigotry. …”

If you think this is just a problem for the “fringe,” you aren’t paying close enough attention to what is going on. In the eyes of the rising generation of leftists, it has become heretical to publicly voice a different point of view on taboo subjects like race and sexuality. These people believe state power and vigilante violence should be used to silence “hate speech” and anyone who questions their orthodoxy should be driven from employment, socially ostracized and physically assaulted.

Political correctness is a confession. Civic nationalism is an obstacle to the spread of the progressive gospel. Progress is the elimination of heresy. This is a titanic struggle between the forces of good and evil. That’s where we are going with this and for “civic nationalism” to triumph and prove successful it would require these people to undergo a total ideological conversion.

Is that realistically going to happen? I don’t think so. We need to brace ourselves for what is coming.