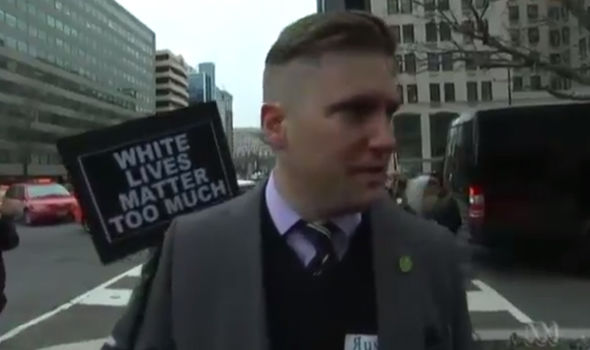 The Left Debates The Legitimacy of Political Violence

Yesterday, I woke up in Charlotte and drove home to Alabama. I wasn’t in any position to respond to this jaw dropping article in the The New York Times on the legitimacy of political violence:

That is not a brainteaser or a hypothetical question posed by a magazine on Twitter. It is an actual question bouncing around the internet after an attack on a well-known far-right activist, Richard B. Spencer, in Washington after the inauguration of Donald J. Trump as president on Friday. …”

Is it okay to initiate violence against the enemies of social justice? Please note that’s where the Left is at less than a week into the Trump administration. We’re called “fascists” by these people, but we are not the ones opening a public debate on the legitimacy of violently assaulting our political enemies.

Richard Spencer was assaulted on the streets of DC:

Gavin McInnes, the leader of the Proud Boys, was attacked outside the Deploraball:

Frank Luntz was attacked at the DC Marriott, doused with red paint and denounced as fascist:

Elsewhere in Washington, DC, a random Trump supporter put out a fire started by anti-fascists in DC, called for peace, and was promptly assaulted:

Someone was even shot at a MILO event in Seattle:

I launched the following tweetstorm while I was on the way home:

3/ Liberalism has caused us to jettison every other point of solidarity: race, ethnicity, religion, culture

4/ The Left now wants to cross the final line into civil war. We don’t even share the same ideology or values anymore

5/ The Left might want to reconsider embracing political violence. Once the cycle of violence starts, it is hard to stop

6/ Do these morons realize that Dixie has been arming for years? Do they know how many people here are spoiling for a fight?

7/ Of course when the Right starts fighting back in self defense, the Left will play the victim. They cry out in pain as they strike you

8/ Go ahead though. I’m absolutely certain they will open Pandora’s Box. That’s where the logic of social justice will ultimately take us

9/ So much for civic nationalism. We don’t even agree anymore that political violence should be taboo and illegal. Think about that

10/ Frank Luntz was attacked in DC for “fascism.” Coexist? You can’t coexist with ANYONE who disagrees with you

A few hours later, I learned that federal prosecutors were launching a crackdown on antifa violence:

Can you imagine the reaction from the Fake News media if WE WERE THE ONES calling for violence against our political enemies and thousands of people were endorsing it and giving it a big thumbs up? In the eyes of the unhinged Left, everyone from Richard Spencer to Gavin McInnes to Frank Luntz is a “fascist.” How long can this “climate of hate” continue before someone gets killed?