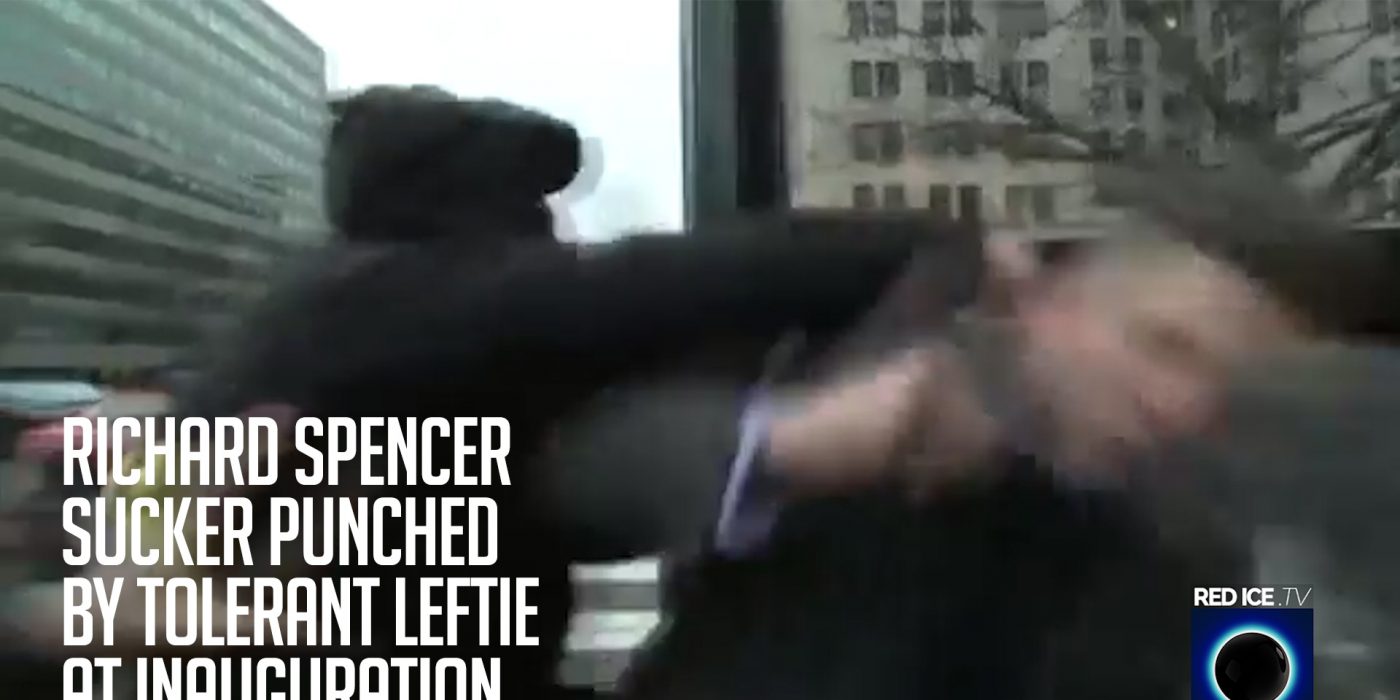 I’m Glad Richard Spencer Got Punched in the Face

The neoliberal establishment and the radical Left have put aside their recent feuding this weekend to enjoy a moment of mirth about Richard Spencer getting sucker punched while performing an interview at the inauguration this weekend. Time Magazine, the New York Times, and the cable news outlets are rejoicing the return of political violence. After all of these months in a row of failure and humiliation, culminating in Donald Trump’s ascent to the highest office, one can’t help but understand their profound need for cathartic laughter.

Last summer in Sacramento, the Golden State Skinheads and our men attempted to host a peaceful permitted rally which was swarmed with over two hundred masked leftist radicals who all agreed that violence is appropriate. Our men, White Nationalist men, stood strong against staggering 20-1 odds, shredding through the gaggle of screeching degenerates. We’re not all as tough as the Sacramento Spartans, but we don’t need to be. We can all strive to be healthier, stronger, and more trained for riot combat than we are, but even now, America’s radical Left is no match for America’s radical Right.

Sacramento was exceptional, but it’s no exception. Despite being dwarfed in terms of resources and manpower, our side has prevailed in every major skirmish where the left has attempted to introduce political violence into the equation. They know this. Everybody knows this.

Everybody wonders why the Black Lives Matter riots always remain in their own neighborhoods. It’s no secret. They know that even the most cheesy White suburban neighborhood is littered with weapons and strong men who are prepared to defend their families and property.

We may have forgotten how strong we are, but our enemies haven’t. They’re scared of us, and they know that if they don’t land a quick sucker punch and scurry off, they’ll be rapidly and soundly defeated. Within the antifa backchannels I’ve infiltrated, they’re cheering their supposed victory against “the fash,” with their “strategists” explaining that the threat and execution of violence does regularly cause men to cease right-wing political activism. And they’re technically right about this. The doxing, the death threats, and the rabbit punches drive a lot of men away from nationalist leadership.

It’s a good thing, though, that the threat of real risk, real pain, and real sacrifice hovers over our movement. The only men we need leading and speaking for this movement are men who can take and bounce back from a sucker punch. The overwhelming majority of men would have never placed themselves at risk of that. The overwhelming majority of men would have second-guessed their project in light of that risk. But the very real threat of violence guarantees an authenticity, integrity, and virility in our movement which will pay dividends as our movement scales up from here.

Men show up and expect to lead this movement all the time. They set up websites. They make a call for followers. And more often than not, they achieve plenty of followers. But sooner or later, the lifestyle sacrifices, physical risks, and mind-numbing obstacles present themselves and most men cast off their general’s uniform and return to their safe, anonymous, apolitical lives. The antifa considers their chasing these men off a “victory.” I consider it hygiene.

I’m not glad that Richard Spencer got punched, per se. But the incident is of huge benefit to the nationalist cause. Having it on record that it’s the Left that is instigating the aggression—with the mainstream Left fully endorsing it—is a priceless long-term propaganda victory. This will help frame what’s in store in the years to come.

Having it on record that leadership of our struggle is genuinely dangerous will frighten off plenty of lesser men eager to elbow their way to the top of a rapidly growing political movement. Having it on record that our leadership will bounce right back from an attack, both literally and figuratively, underscores the seriousness of our work and the quality of our men.

I’m not associated with Richard Spencer. I’m not a contributor to this website. I belong to a separate project with a different message and strategy. But moments like the one that took place this weekend transcend our differences. The leftist degenerate attacked all nationalists when he attacked Dick, and it escalated a conflict between nationalists and globalists, one which we are destined to win.

TopicsRichard Spencer
Share on FacebookShare on TwitterShare on RedditShare on VKontakte