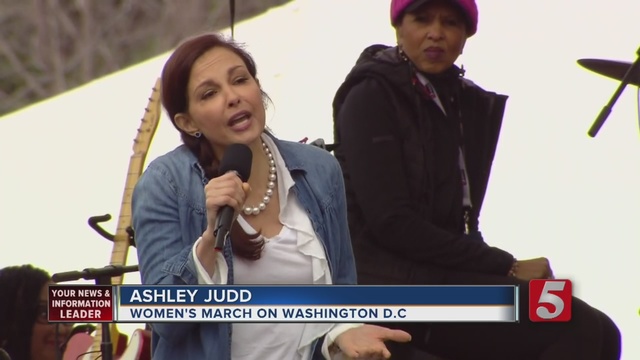 In the speech, she says “maybe the South actually is going to rise again. Maybe for some it never really fell.”

I’m catching up on all that I missed yesterday while was on the road. I don’t see the world in terms of sexual identity politics. In my traditionalist worldview, men, women and children are part of a larger whole, the organic units we call families which are the cells of the nation. I don’t hate women. That’s absurd from my point of view. Why would any nationalist hate our wives, daughters, mothers and sisters?

After watching this disgusting speech by Ashley Judd, I came away from it with an even more intense dislike of feminism, which is plainly ruining our women. This is what liberalism and Marxism applied to sex and gender sounds like. Notice the complete absence of anything resembling femininity at the Women’s March.

Here’s why the South rising again wouldn’t be such a bad idea:

“For a range of nonfictional southern spokesmen as well, civilization itself rested on appropriate gender roles and relations. While the slave South was maintaining the proper order of things, the North and sometimes the rest of the Western world, was not. In his 1856 graduation address to the Virginia Military Institute, George Rumbough explained that free society was foolish to question the natural, divinely ordained order of things. Listing the dangerous “isms” he saw to the north, Rumbough included women’s rights, Bloomerism, and Free-Loveism, along with socialism, atheism, and abolitionism. The North’s distorted ideas about slavery were not only tied up with its misguided ideas about religion, liberty, and government, but also with its foolish misconceptions of manhood and womanhood. Rumbough contrasted the South, “where woman, the most powerful, the purest, noblest element of society, is considered as an object of love,” with the North, “where woman “is viewed as an object of distrust, and far from beautifying, transcends the boundaries of modesty and decency, and sighs for an MD suffix or the transcendent reputation of a philanthropic lecturer.” One of many advantages of basing a society on slavery rather than free labor, according to Rumbough and others, was that the institution safeguarded hierarchies of gender as well as of race.

Southern fears about gender proprieties illustrate how urgent the sectional conflict could become when it appeared to enter the realm of the home and family. One Virginia farmer, writing to a local newspaper in 1854, expressed just such fears. Responding to rumors that a female preacher had been plying her trade in the area, the farmer expressed disbelief then sharp anxiety. “Some hundreds are right uneasy about their wives,” he wrote. “They are afraid that some of them women’s rights folks, from the N., are traveling among us, and that some wives are encouraging them.” Even an antislavery fanatic would be more acceptable than a feminist, though the letter-writer. “One would spoil our negroes, but the other would spoil our wives and sweethearts, and either, would be made a bad piece of property.” Perhaps intending that his readers should take the loaded word “insurrection” with a grain of salt (the word was strongly associated with slave revolts in the antebellum South) the farmer concluded: “It is feared that there will be an insurrection among the women, and that they will begin to chew tobacco and drink whiskey.” Likewise, the North Carolina congressman David Outlaw recoiled at the apparent immorality of the society he encountered in Washington, D.C. In Outlaw’s eyes, it was the behavior of northern women there that caused moral deterioration. “There is a boldness,” he wrote to his wife, “a brazenfacedness about Northern city women, as well as a looseness of morals which I hoped may never be introduced south.” In this way white southerners who worried about such matters sectionalized anxieties about moral decline, projecting those anxieties onto their image of the North.”

“That same spirit which would turn everything into gold … has invaded the sphere of woman. Yancey contended that northern men had desexed women, had “brushed the down from her cheek, and raised the stiff beard in lieu. Materialism in the north condemned women as worthless in their vocation as mothers and thrust them into the workplace. Horribly, northern society had led women to believe “that the rights of man are also woman’s rights, and that the editorial chair – the medical – the legal and clerical professions should be filled by her, as well as by men.” Northern women had mounted the speaker’s platform and joined in “public harangues,” and some wore “Bloomers,” ready “for bestriding a fence or a saddle as utility shall demand.”

“It is feared that there will be an insurrection among the women, and that they will begin to chew tobacco and drink whiskey.” I laugh every time I read that line.

Can’t we all agree now it turned out to be far worse than our ancestors imagined? Liberalism hasn’t brought us progress. It is a disease which has perverted the natural order of things. As our social order has crumbled under the assault of revolutionary abstractions like ‘liberty’ and ‘equality’, our women have been among the most severely affected and have declined from their forebearers. Some have even gone stark raving mad.

Just watch the “public harangue” below: all Ashley Judd is missing is the beard.