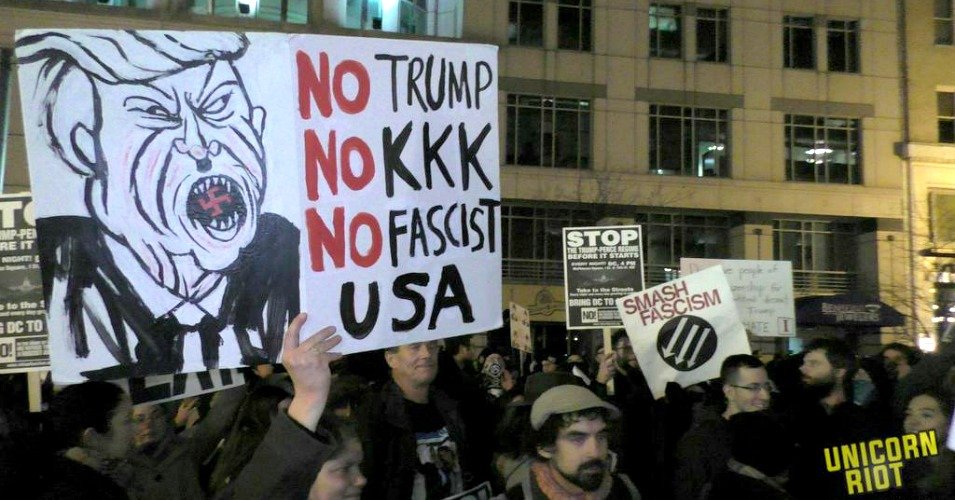 New York Magazine attended the #Deploraball and offers us this window into the Alt-Lite:

“When I asked to attend the DeploraBall — the vigorously-protested 1,000-person pro-Trump black-tie event causing a rift in the alt-right — organizer Jeff Giesea offered an angle: “There’s definitely a Trump baby boom in the works.” His DeploraBall co-organizer, anti-feminist activist Mike Cernovich, will soon have a daughter with his wife. And Giesea’s surrogate mother is twelve weeks pregnant with a son. Surrogate? “I’m a gay man,” said the 46-year-old businessman, whose mother is Mexican-American. (She supports building the wall.) Will his son have two dads? “It’s complicated,” he said, describing his relationship as well as the conflicting impulses within his movement — particularly when it comes to gender and sexual politics. …

While protesters with signs preaching feminism and resistance to fascism were being pepper-sprayed outside the DeploraBall, Cernovich invited Gateway Pundit blogger Jim Hoft (who came out as gay after the Pulse nightclub attack in Orlando) onto the stage to announce his website’s first White House correspondent: “Twinks for Trump” photographer Lucian Wintrich, whom Hoft described as a (gay) victim of the New York City art world’s “gay mafia.” Leaning into the microphone, a tuxedo-clad Wintrich announced, “I’m going to be the youngest, gayest correspondent in the White House in history!” Someone in the crowd shouted, “Our gays are better than their gays!” DeploraBall’s guests, who had paid between $99 and $2500 to be there, cheered. Soon thereafter, a man with a Flock of Seagulls haircut took the stage to sing. …

In the world of Deploraball, same-sex interactions of all kinds — social, political, sexual — seem somehow easier than those between men and women. …

A question about Trump’s golden shower rumor led McInnes to an indictment of sex in New York City: “That’s not really his culture,” He said of Trump. “I think that fact that rumor got wings shows how naive the left is, and how they don’t get Trump or really anyone that’s not in their inner circle. That’s normal for us to hear about, golden showers.” By “us,” he meant “New York creatives,” the liberal-leaning tribe to which McInnes, who has worked in magazines, blogs, radio, and TV, still sort of belongs.

“What does define these new voters? Gavin McInnes describes what he sees as the prototypical Trump voter: “He’s a chain-smoking, swearing Staten Islander. … You know what he thinks of gays? He doesn’t. He doesn’t really care,” McInnes says, throwing his hands in the air in an elaborate shrug, noting that “he” doesn’t care about transgender issues or racism either. “It doesn’t come up in our day-to-day. You know what comes up in our day-to-day? A little three-letter acronym that goes like this: U-S-A! U-S-A! U-S-A!

Do you see the Alt-Lite’s problem here?

Trump’s base are rural, White working class evangelicals from the South and Midwest. I talked to dozens of these people while I was touring DC. Trump lost the West Coast and the Northeast. He lost California and New York by such a landslide that Hillary ended up winning the popular vote.

The Alt-Lite seems to think that homosexuality can be mainstreamed on the Right, but “White identity politics” will and should remain taboo. And so, you can have someone like MILO who bathes in blood, a White House correspondent who hosts “Twinks for Trump” rallies, and some other gay guy from California who is having a child via a surrogate and that is going to be “mainstream” and the Trump coalition is going to work that way in practice. As Bill Mitchell says, there is “no room on the Trump Train” for White Nationalists. Now that the election is over, the Alt-Lite has convinced itself that White identity politics had nothing to do with Trump’s victory – this, of course, after scrubbing their own Twitter accounts – and that huge numbers of blacks and LGBTs will vote for Trump in the future.