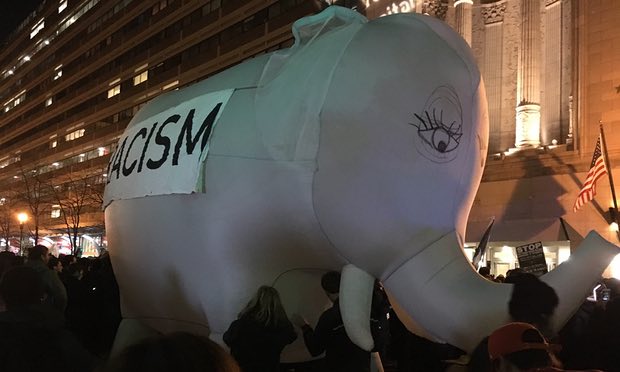 I watched the anti-fascist mob protest the #Deploraball last night.

I sat in my hotel room, scrolled through Twitter and scanned the live feeds. Just as I predicted, a huge mob of violent anti-fa assembled outside the building. They hurled every curse word in the book at the attendees: Nazi, racist, fascist, bigot, sexist, misogynist, etc. They set fires and chased people through the streets. They threw water bottles. At one point, I saw them physically assault a #Deploraball attendee with a flag pole after he patiently explained he wasn’t a “white supremacist.”

The most remarkable aspect of the violence at the #Deploraball was the lack of any significant difference between their actions at the NPI conference or the “Queer Dance Party” at Mike Pence’s house. In the latter case, I recognized the same people performing the same act that they had done outside the Maggiano’s restaurant. The violence at the #Deploraball was simply one manifestation of the anti-fascist violence that occurred all over DC this weekend. In one case, I heard the protesters screaming “go back to your double wide” and “go back to the South” and even “f*** Piggly Wiggly.” Yes, the Piggly Wiggly grocery chain became a part of the #Deploraball story, although I haven’t this reported anywhere else:

Here are the graphic images of the assault aftermath before being treated by EMS and taken to the hospital. #Deploraball pic.twitter.com/nSOcNQaVel

Anti-Trump protesters are now chanting 'fuck the police' and 'anarchy now' outside of the #DeploraBall.pic.twitter.com/Bp1orBQyk6

They are following this guy around and telling him to leave. #DisruptJ20 #DeploraBall pic.twitter.com/qqORlVeviK

The same people are going up to everyone with the Trump hats and waving things in their faces. #DisruptJ20 #DeploraBall pic.twitter.com/cQ8IP5Qh9Q

The Piggly Wiggly accusation was hurled in the last video below.

By the end of the evening, I was hanging out with some Alt-Right friends down the street from the #Deploraball. After I heard the news that an inflatable elephant emblazoned with “RACISM” was outside the #Deploraball, I was so intrigued that I walked down there to take a look at the spectacle. Clearly, disavowing Pepe and praising Martin Luther King, Jr. had gained the Alt-Lite nothing in the eyes of the Left, as NPI has held events in that building in the past with much less drama.

This is exactly what we expected to happen. For all of Bill Mitchell’s happy talk about unity and civic nationalism, what happened at the #Deploraball points to a far different conclusion. The truth is that you don’t have to do anything to be accused and attacked for “racism.” You can disavow “racism,” but remain a target of hatred and hostility. You’re guilty of being White.