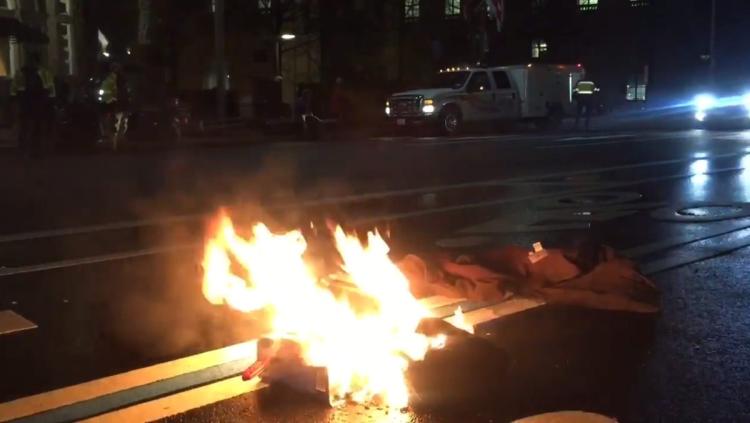 It is late here in Northern Virginia.

I’ve been on the road all day traveling from Alabama to Washington, DC to cover the Trump Inauguration. It has already been an eventful day. I came prepared to see a liberal meltdown in the last days of the Obama administration, but I wasn’t expecting to see literal one:

“A protester set himself on fire outside Trump International Hotel in Washington DC on Tuesday.

The 45-year-old man, who has not yet been identified, said the act was in protest of the President-elect’s looming inauguration.
Witnesses described how he yelled ‘Trump’ several times as ‘flames ran up his back’ before lying down in the street …”

Yes, a snowflake from California has already set himself on fire outside of the Trump International Hotel. He was so triggered by the thought of President Trump that he spontaneously combusted.

In related news, there was a “Queer Dance Party” outside of Mike Pence’s new house:

“About 200 protesters shimmied and sashayed their way through the Chevy Chase neighborhood Wednesday night toward the house temporarily rented by Vice President-elect Mike Pence to protest what they consider his anti-gay views. …

Pence’s temporary neighbors in the liberal enclave of Chevy Chase have been flying hundreds of gay pride rainbow flags as a silent protest since he moved into the neighborhood in November. …”

The Hunger Games has come true.

This is what awaits us in the Capitol. BTW, I recognize the leader of the mob here because it is the same queer who I saw doing his moves outside of Maggiano’s on the weekend of the NPI conference. This is further evidence that the harassment the Alt-Right has to endure in general – see also the plot to disrupt the #Deploraball – is creeping into opposition to the Right as a whole.