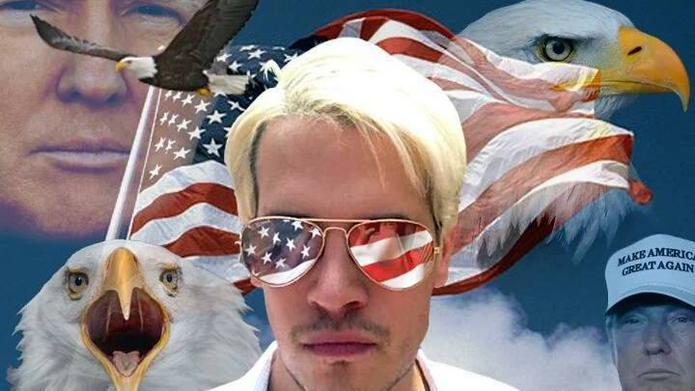 I’ve been pretty hard on MILO, but this is hilarious. In the “Open Letter To Milo Yiannopoulos,” they’re calling him a Nazi and threatening to revoke his gay card:

“I’ve hated you for a long time — being compared to you by some commenter on my column sent me into a rage for several hours — but the stunt you pulled against that young woman in Milwaukee was the last fucking straw.

If you’d like a transgender Berkeley student to direct your firehose of impotent rage at, I offer myself. Here’s the target on my back, so go ahead and take aim. I’m a Jewish anarchist drag queen with no eyebrows. The jokes write themselves. I dare you to put up pictures of me — it’s a matter of public record that I look fantastic. Tell that crowd to laugh at me. I’m not ashamed of my face or my body or my politics or my life choices.

Don’t you want to find something original to say? You can’t cut me down to size, I’m five foot two and chronically depressed. I dare you to say something about me that I haven’t already said about myself. …

I’m not going to waste time telling you that you’re a bigot. The faculty has pretty well covered why you shouldn’t come here in their open letters to the chancellor. Besides, being called a Nazi doesn’t appear to stop you or anyone else on the alt-right from doing a goddamn thing….

When you get here on Feb. 1, we will be waiting here to strip you of your gay identity. You can have sex with all the men you want, but you’re not gay anymore. You’ve used your sexual orientation as an excuse to spit bile and galvanize cowards for long enough. Put your badge and gun on my desk. The community rejects you. You have never been one of us. …”

Dude, you can’t be gay anymore, even if you disapprove of Roman salutes. It doesn’t matter that you are a “black dick supremacist.” You’re just as bad as those other Nazis.

Put your badge and gun on my desk or else!