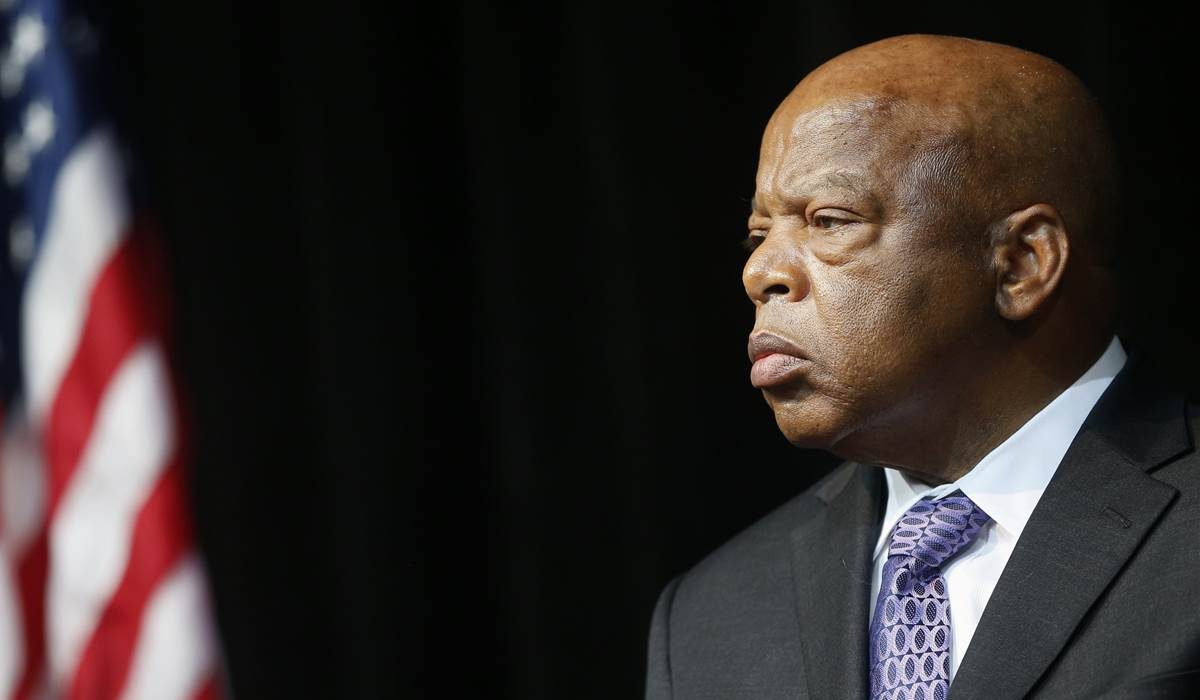 John Lewis, The Boy From Troy, Exposes The Limits of Liberalism

I watched the John Lewis press conference this morning.

Personally, it was an amazing thing to watch as someone who was born in 1980. I’ve lived virtually my entire life in the Alabama Black Belt. The world that John Lewis described at the MLK Breakfast in Miami, the Jim Crow South, vanished 15 years before I was born. The “Boy From Troy” has represented Atlanta in Congress since I was 6-years-old. Troy and the surrounding area has changed quite a bit since 1965.

I’m starting to wonder if ‘civil rights icon’ John Lewis got walloped so hard on the Edmund Pettus Bridge in 1965 that he has lost track of time or just gone senile. He closed his speech … in 1965. That was 52 years ago. I’m 36-years-old and I have a 2-year-old son. Three generations have been born and come of age in the Alabama Black Belt since John Lewis faced off with Alabama State Troopers on ‘Bloody Sunday’.

For civil rights dinosaur John Lewis, it is always Selma in 1965. The Troy State University that he recalls being segregated is now integrated like every other university in Alabama. The Selma where blacks didn’t have the right to vote in 1965 voted overwhelmingly for Barack Obama in 2008 and 2012. Hillary Clinton carried Dallas County, AL with 68.6 percent of the vote in 2016. Blacks had no problem voting for Democrats in Selma, AL. In 2017, they now control every level of government in Selma.

As I watched John Lewis speak, I kept wondering when he would get to the part where the cameras left, the marching stopped and the civil rights legislation was signed into law. There isn’t a hotel, restaurant, park, residential neighborhood or private business in Alabama in 2017 that is racially segregated. The Klan has been marginalized while the SPLC has a budget of tens of millions of dollars. There are no more segregationists. There are no more white supremacists blocking John Lewis from marching across the Edmund Pettus Bridge. We have interracial marriage. We even have the gay marriage now.

It is Martin Luther King, Jr. Day. Yes, even though MLK has his own federal holiday, there are still precincts of the Left which believe we still live under ‘white supremacy’ and ‘systemic racism’. Barack Obama has been the president for the last eight years, but John Lewis wants to perpetuate the fiction that it is still Selma in 1965. Why do they do this? Why do they perpetuate the fiction that they are ‘freedom fighters’ fighting against the establishment? Bruh, you have been in Congress for 30 years!

Liberalism is a philosophy of social disintegration. It tears apart the social fabric and demolishes traditional hierarchies, but what it is unable to do is build anything on top of the ruins. As Thomas Carlyle said, once liberalism has accomplished its big goal – in this case, the achievement of ‘civil rights’ – it “solicits you to sing Fraternity, &c., over it, and to rejoice in the new remarkable era of human progress we have arrived at.”

Just look at Selma, AL where John Lewis still lives in his own mind:

“Nearly 42 percent of the city’s population lives or has lived in crushing poverty, which is nearly double the rest of the state’s average. In addition, rampant crime festers throughout the city.

“This is slave work, that’s what it is, but the only work around,” a man laying bricks for a mere pittance that were handmade in the 1870s for a construction company told a reporter for The Guardian last February. “Kind of funny when you think about it, because them bricks were probably made by slaves. That is Selma for you, though: still a city of slaves.”

Council McReynolds, a man who has spent all of his 50-plus years in Selma, told The Guardian reporter that “all the factories that used to be here are closed” and left joblessness in their wake.”

In a few months, John Lewis is coming back to Selma … to do, what else, march over the Edmund Pettus Bridge. The people who live there told The Guardian that Selma is “still a city of slaves.” In a sense, this is true. While real slavery no longer exists there and segregation fell over a half century ago, Selma is still enslaved by a 20th century dream that was always a delusion.

Picture it now: a youngish black kid wearing Air Jordans approaches John Lewis on the Edmund Pettus Bridge and asks the pointed question, “where’s my dad?” John Lewis replies, “well son, he was shot and killed in Selma a few years ago after he was liberated from your mom.”