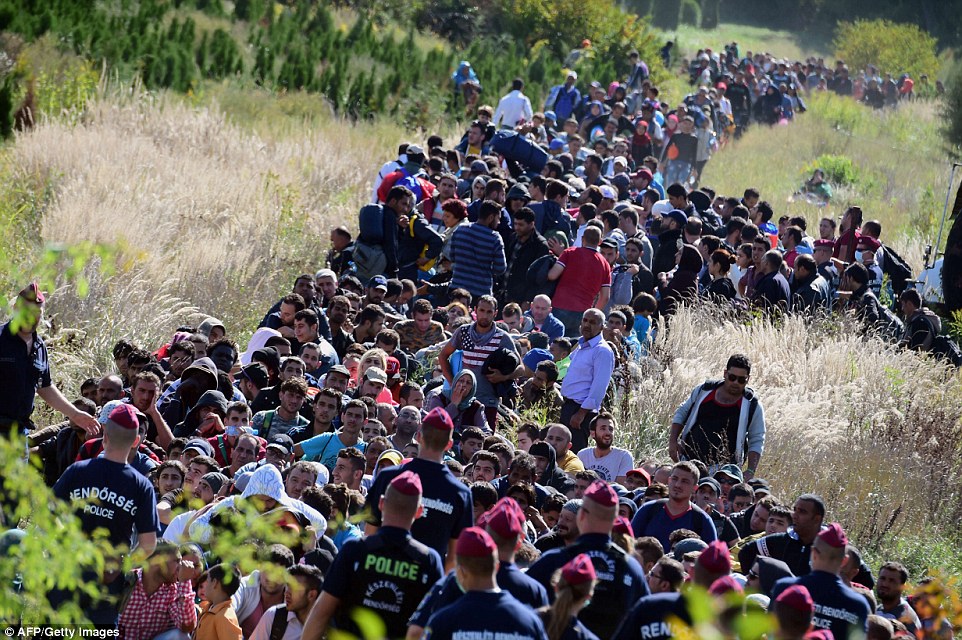 We talk about the rights of undocumented migrants, while they actually have none. They are invaders, illegal settlers. In any country of Africa or Asia, their demands would be denied and they would be deported.

Supported by a segment of the intellectual media and show business class, the immigrationist lobby, consisting of well-trained Trotskyist leaders and a militant mass of naïve and manipulated sentimentalists, has found its main hobbyhorse in the defence of ‘undocumented immigrants’, which is more interesting to them than defending the French people who have been laid off and then exhausted their insurance claims.

Besides which, the term ‘undocumented’ itself is incredible. As if they had lost those papers! As if they were automatically and rightfully entitled to ‘papers’ thanks to their mere presence in France (in actual fact, a ten-year residence is automatically renewable). They are not here illegally, nor are they outside the law, no — they are simply ‘undocumented’.

We talk about the rights of undocumented migrants, while they actually have none. They are invaders, illegal settlers. In any country of Africa or Asia, their demands would be denied and they would be deported.

In France, they demonstrate in order to defend their ‘rights’ by openly forming ‘collectives’ and occupying public and private buildings. Save for some increasingly rare exceptions, such as the forceful eviction of the occupants of the Saint Bernard Church in 1997, the authorities remain idle-handed, frightened by the pro-immigration lobby that screams out its outrage at each expulsion.

This is to be seen as the complete legal laxity to which the humanitarianism of human rights leads. In terms of public international law, the demonstrations conducted by migrants which originate from foreign countries in an effort to obtain the ‘regularisation’ of their illegal presence in France are a criminal offence. Every year, dozens of Europeans are expelled from African and Asian countries without anything resembling good treatment. A German was recently sentenced to prison in Iran for having sexual intercourse with a Muslim native.1 No one protested…

On a regular basis, the self-righteous press cries tragedy at the ‘difficulties faced by illegal immigrants’, as if they were the victims of racism and discrimination, and as if they had a spontaneous right to settle in our lands illegally and immediately benefit from employment and public relief. Therefore, one conceives Europe implicitly as a gigantic sanctuary where, morally speaking, any man can come and reside.

However, as I have explained elsewhere, the economic situation of such ‘undocumented’ immigrants is much better than the one faced by those who live on the fringes of society, and those of French descent with no rights at all, who are mocked by the humanistic press and the extreme political Left as if they were faking their plight.

When taking this reasoning to its limit, in accordance with the articles one reads in Libération and Le Monde regarding the ‘rights of undocumented migrants’, the population of our whole planet has the ‘right’ to come and live in France. Implicitly, every immigrant, by the mere fact of his presence on our territory, has automatic access to a residence permit in France, and therefore in Europe, thanks to the ‘Schengen area’. This is a grotesque new category of public international law invented by the intellectual media class: the natural right of all human beings to settle in Western Europe, without any reciprocity that would be favourable to Europeans. When one is aware of the fact that, in African countries, a significant share or perhaps even the majority of the young population are candidates for emigration to Europe, one can imagine the extreme danger of adopting the unconditional defence of ‘undocumented’ immigrants. With his typical irresponsibility, Abbé Pierre2 has already declared that, from a moral perspective, France could accommodate 50 million Third World migrants in its deserted countryside.

The daily newspaper Le Monde, acting as the preaching pulpit of our ministries, specialises in the apologia and the defence of ‘undocumented immigrants’. Moreover, ever ready to preach the rule of law, Le Monde always strives to demonstrate the legitimacy of the presence of illegal immigrants. Advocating the nth ‘collective’ of illegal Chinese immigrants, the well-intentioned daily paper states, ‘The young and undocumented Chinese migrants that recently arrived in France came out of their reservations and demonstrated in the streets, demanding regularisation. The creation of this association seems to constitute a new step towards integration.’ (20 January 1999). In other words, foreigners who ‘arrive’ illegally and then demonstrate immediately so as to be regularised (without enjoying any legal status) contribute to the notion of republican integration in a reasonable fashion. As evidence of such integration, the newspaper mentions the case of a certain Mrs Lin Ye, regularised in July 1998 thanks to the pressure exerted by the ‘third collective’ of undocumented migrants. Ms Lin Ye is unemployed and does not speak French, but presently enjoys maternity benefits and social security, as well as unemployment benefits. She is untouchable and can easily find an illegal job in her own community. How many young, French-born women who are unemployed and not entitled to unemployment benefits would not envy the exorbitant privilege and the positive discrimination which this illegal alien enjoys? In reality, what is called ‘integration’ in political cant is its very opposite: the organisation of protected non-indigenous communities which will take it upon themselves to welcome new illegal immigrants.

On the topic of Sibidé Hassan, a Malian who arrived illegally with a (pregnant) woman and children and who had come out of prison only to be arrested and released following the occupation of a church, Le Monde is in disbelief:

Sentenced to six months in prison and a five-year ban from our territory, he was not deported upon his release. Hassan says he is not discouraged and would never return to Mali. His life is in France. His children attend kindergarten. His hopes have gone up again since his wife was regularised [she gave birth in France, the child is therefore French, which makes her status legal], because this suspends the implementation of the exclusion order issued against Hassan. Awaiting his own papers to be issued, he openly continues his illegal life, in plain sight.

Still in Le Monde, Alexandre Garcia pours pity on the case of ‘Mr Abdelkader Khallafi’. An edifying story. That boy, ‘sweet and always smiling’, is a 27-year-old Algerian who entered France illegally in 1991 and managed to gain admission to the Social Rehabilitation Hosting Centre (CHR) at Nanterre, at our taxpayers’ expense. In January 1999, the police arrested him, but did not evict him. What followed was the indignation of the CHR staff and the mobilisation of undocumented immigrant support groups. Hands off our buddy. The prefecture clarifies that the ‘young man’ had not been arrested as an applicant for regularisation whose request had been rejected, but owing to three criminal convictions, in addition to temporary ban sentences that applied nationwide. The Algerian alien is actually a burglar and a robber. Nevertheless, because of the pressures exerted by ‘support groups for the undocumented’, he was released! And the police lost his trail. He resurfaced several years later, supported by the Hauts-de-Seine Collective for the Undocumented, and expects to be regularised. One would think this is a bad dream, but it is not. An Algerian gangster and an illegal immigrant protected by the anti-racist leagues and the various collectives for the defence of the undocumented can defy the rule of law and live in France with total impunity.

All these facts are common knowledge throughout the Third World, encouraging the influx of new illegal immigrants.

1 Helmut Hofer, a German businessman who was in Iran, was arrested in 1997 for allegedly having sex with a 27-year-old unmarried medical student. Initially he was sentenced to death, although this was eventually overturned by the Iranian Supreme Court and he was released after paying a fine in December 1999. The woman was sentenced to 100 lashes.—Ed.

2 Abbé Pierre (1912–2007) was a French Catholic priest and a veteran of the French Resistance. In 1949 he founded the Emmaus organisation, intended to give assistance to the poor and refugees, and later became an advocate for illegal immigrants.—Ed.

The above text is an excerpt from Guillaume Faye’s The Colonisation of Europe (Arktos, 2016). If you liked this selection, be sure to check out the whole book.
TopicsEuropean New RightFrench New RightGuillaume Fayeimmigration
Share on FacebookShare on TwitterShare on RedditShare on VKontakte