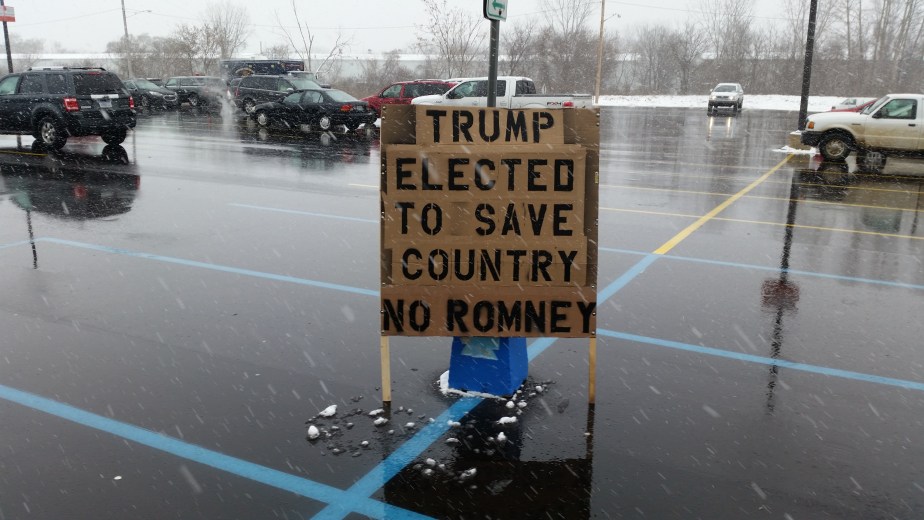 President Donald Trump is doing something unprecedented in the history of American politics: circumventing the media and using post-election rallies to talk directly to his constituents. I attended his recent USA Thank You Tour rally in Grand Rapids, Michigan and saw first-hand how the movement he created is continuing to grow.

When presidents—hell, when politicians in general—get the keys to the castle, they usually lock themselves in and don’t reemerge until reelection time rolls around. Reagan, Clinton, Bush, Obama: they only pretended to care about the people until Election Day, at which point they vanished for four years and let the media do the talking for them. President Trump has said “NUTS!” to that approach. Even though he demolished Hillary Clinton last month, he’s continued to hold rallies, bringing his message directly to the people who put him in office. So far, the USA Thank You Tour has rolled through Ohio (Cincinnati), North Carolina (Fayetteville), Iowa (Des Moines), Louisiana (Baton Rouge), and Michigan (Grand Rapids), bringing tidings of good cheer and winning across America.

With the exception of Baton Rouge, which doubled as a rally for Republican Senate runoff candidate John Neely Kennedy, all of Trump’s stops have been in swing states that he wrested from the Democrats’ grip. Excluding Florida and Maine’s second congressional district, all of Trump’s swing state victories were in the Rust Belt, the primarily White swath of territory stretching from Pennsylvania to Wisconsin. Formerly the beating heart of America’s industrial base, the Midwest and Pennsylvania have slipped into astounding levels of poverty as manufacturing jobs are off-shored to Mexico and other third-world countries. With the Democrats having abandoned the White working class, all the GOP needed to do to lock down the blue-leaning states of the Rust Belt was run a candidate opposed to free trade. Trump was that candidate, and he swept the Midwest, winning every state in the region except Illinois and Minnesota, only losing the latter by a razor-thin margin.

In that context, the USA Thank You Tour demonstrates Trump’s commitment to the principles that carried him to victory. I attended the man’s rally in Grand Rapids this past Friday and saw for myself where Trump’s movement is going. No state has been more hurt by globalist free trade policies than Michigan, and the state’s residents turned out in force to see Trump thank them for their votes.

Holding a victory rally in Grand Rapids has more symbolism than is readily apparent. With Jill Stein’s recount challenge quashed—due to the Left’s fears that it will expose massive Democratic voter fraud—Trump’s victory in Michigan is now settled. Just as importantly, Grand Rapids was where Trump held his final rally of the campaign, at midnight on Election Day. Several thousand people packed the DeltaPlex Arena to watch the Donald speak at one in the morning, where he soberly told the crowd that if he lost, American nationalism was dead. If she had won, Hillary Clinton would have flooded America with Syrian “refugees” and illegal Mexicans in order to drown out the White vote, while simultaneously shutting down dissident media outlets like Breitbart and Infowars. Returning to where he ended his campaign to gloat over the corpse of Hillary’s campaign is a move that Michiganders will remember.

The evidence was in the turnout. I drove to the rally with my friend Alidisti, and by the time we arrived (1:30 pm, well before the doors opened), there was already a line several hundred strong. As we waited in the cold, a lake effect snowstorm blew through the area, dampening our coats but not our ardor. We watched as multiple pro-Trump grandstanders set up signs in the parking lot, including one guy who unveiled a sign reading “President Trump! Clinton Immoral: Will God Judge America?” that he had to assemble with a hammer and power drill. (To answer his question, in the words of the hag from Pumpkinhead, “He already has, son. He already has.”) Overhead, a single-prop did loop-de-loops with a banner reading “Drain the Swamp. No Bannon, No Sessions.”

Inside the arena, the crowd slowly swelled to its max capacity of 6,200, with thousands more turned away at the door due to a lack of space. Trump’s warm-up acts included a performance from a local high school marching band and rousing speeches from his Michigan campaign co-chairs (one of whom declared that Trump’s enemies will either “get on the train or feel the pain”) as well as the chairwoman of the state GOP. I noted that the rally music playlist was little changed from previous events, featuring staples such as “You Can’t Always Get What You Want,” “Uptown Girl” and “Born on the Bayou,” though the recording of Elton John’s “Funeral for a Friend/Love Lies Bleeding” had been switched to a hard rock version.

The president-elect came on stage at seven to Lee Greenwood’s “God Bless the U.S.A.” and a chorus of cheers. I recorded most of his speech, and you can watch it below:

Trump’s Grand Rapids rally combined aspects of his combative, off-the-cuff primary speeches and his more prepared general election remarks. He skewered the media for failing to predict his victory (singling out their assertion that Texas was a swing state), ridiculed both Jill Stein and Evan McMullin without mentioning them by name, and gave us his signature “Get ’em outta here!” when the handful of Leftist disruptors in the audience tried to start trouble. At the same time, he laid out his plans for education and bringing back jobs, bringing out Secretary of Education nominee Betsy DeVos and Dow Chemical CEO Andrew Liveris (who will head his Manufacturing Council) for brief speeches on abolishing Common Core and restoring American manufacturing, respectively.

The atmosphere was no less electric than any of the previous Trump rallies I’ve attended. Alidisti actually cried a little when President Trump came on stage and told me afterwards that she felt proud to be an American for the first time in years. While waiting in line, we chatted up a pair of locals, a White and Black man and both ex-Democrats who supported Trump after seeing what Obama had done to Michigan and the middle class. I even got into the spirit of things by purchasing one of the ubiquitous “Make America Great Again” baseball caps that Trump supporters wear; no small deal since I hate hats. On our drive out, we got a look at the sadsack Leftists protesting outside the arena; Alidisti snapped some pics while I yelled at them, “Jesus loves you too!”

After seeing Trump speak in Grand Rapids, any lingering doubts I had about the direction of his presidency were ameliorated, at least temporarily. It disheartens me to see alt-Righters falling for media gaslighting, believing their bogus reports about him going back on his campaign promises or nominating cuckservatives for sinecures (such as handing the U.N. ambassadorship to token minority Nikki Haley). Anyone who’s done a cursory study of Trump’s life and/or read The Art of the Deal knows that he is a hands-on guy who talks his underlings into doing things his way. For example, barely a week after choosing him as his running mate, Indiana Governor Mike Pence had already adopted Trump’s positions on border security and trade.

President Trump’s deal with Carrier should be enough to convince his supporters that he’s serious about implementing his agenda. If he keeps up what he’s been doing so far, he’ll almost certainly be able to halt America’s decline, possibly even reverse it. If you doubt me, go to a Trump rally in your local area (he’s doing events in Wisconsin, Pennsylvania, Florida and Alabama in the coming week) and see for yourself. At bare minimum, you should wait until he actually takes office before you commence with the kvetching.