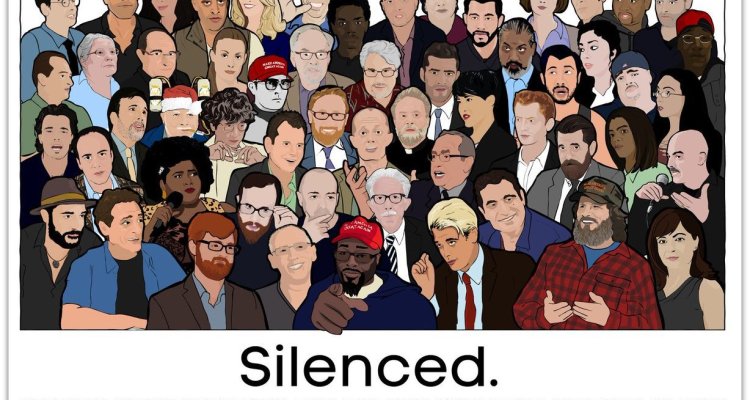 The Silence of the Wolves

Silenced, the new documentary from Mike Cernovich and Loren Feldman, is a good primer on how the Left has been suppressing free speech in America and the West. However, mediocre direction and editing keep it out of the halls of greatness.

It’s a refrain as tired and obnoxious as the police sirens wailing past my window at four in the morning: “The First Amendment only protects you from GOVERNMENT censorship! Private companies can do whatever they want!” It’s the standard line whenever a Right-winger is fired from their job due to Leftists instigating a social media hate mob against them. They’re technically right, in the same way that a bully can run to teacher and snivel, “He started it!” after you finally deck him for waving his hands in your face screaming, “I’M NOT TOUCHING YOU, I’M NOT TOUCHING YOU!” That doesn’t make witch-hunts against people for un-PC comments right, moral or anything other than worrisome.

John Stuart Mill covered private anti-free speech coercion in his seminal work On Liberty, stating that free speech laws exist to protect minority opinions, because parroting popular opinions will never put you in danger, no matter where you are. No matter how repressive the Soviet Union got, no one was ever sent to the gulags for pointing out that the sky was blue or grass was green. Liberty is not a gift imposed on people by government fiat, but springs from that people’s very beliefs and actions: if they silence each other through private intimidation, they are no better off than if they lived under a totalitarian regime. At least political prisoners get three hots and a cot; if Gawker got you blackballed because of an uncouth Tweet, you were up Shit Creek without a paddle… and a hole in your canoe.

Silenced: Our War on Free Speech, the recent documentary from nationalist journalist Mike Cernovich and filmmaker Loren Feldman, bills itself as an examination of how Americans are censoring themselves through coercion, stalking, and witch-hunts. Additionally, Silenced also takes a look at how social media sites such as Twitter are trying to stifle Right-wing discourse by banning individuals such as Chuck Johnson, Ricky Vaughn, Milo Yiannopoulos and yours truly. It’s an important subject, and both Cernovich and Feldman have the chops to pull it off. Unfortunately, Silenced is dragged down by its sluggish pacing, weak direction and questionable editing. The final product is still worth watching, but you’ll need to steel yourself to make it to the end.

Silenced is divided into several sections, each highlighting a specific section of modern life (such as religion, journalism or higher education) and its relation to the assault on free speech. The film features an ensemble cast of interviewees from all ends of the political spectrum, from the aforementioned Johnson, Vaughn and Milo to Dilbert creator Scott Adams, free speech attorney Alan Dershowitz, and radio host Anthony Cumia. Interestingly, both Cernovich and Feldman minimize their presence in Silenced: while Cernovich does appear a couple of times, it’s as an interviewee and not a narrator, and Feldman only has a couple of off-screen speaking parts.

Therein lies Silenced’s main problem: a lack of direction. Cernovich may have been afraid that if he appeared too much in the movie, it would look like a vanity project, but he went too far in the opposite direction. Silenced has no narration and little music, meaning the only thing to guide the viewer are the interviews, making me feel like I’m on a guided tour of Mammoth Cave and Ranger Rick is taking a nap instead of doing his job. Even a minimal amount of narration at the beginning of the film and each of its sections would have gone a long way towards immersing the audience in the action.

A lack of direction also amplifies Silenced’s second major problem: a lack of action. While Cernovich billed the film as a “think piece,” no documentary on free speech can avoid discussing the violent attacks Leftists have launched on their enemies in recent years. For example, my friend Roosh nearly had the Canadian leg of his world tour last year shut down due to mass Leftist protests and stalking, while Yiannopoulos has had his speeches at college campuses attacked or cancelled due to SJW shenanigans. Up until Project Veritas Action blew the lid off of the Democrats’ bird-dogging, Leftists were constantly instigating violence at President Trump’s rallies. Barely a month ago, NPI attendees had to fend off a mass invasion of antifas into the restaurant where they were eating. Exercising your freedom of speech won’t just get you fired or banned from social media these days: it can put your life in danger.

Silenced doesn’t cover any of this. Yiannopoulos doesn’t discuss the violent Leftist disruptions at stops along his Dangerous Faggot Tour, and Roosh isn’t even in the film at all. These omissions can’t be for ideological reasons, since Silenced features a cast so diverse that it includes pro-Hillary Muslim lawyer Mirriam Seddiq and Andrew “weev” Auernheimer, a White nationalist who literally has a swastika tattooed on his chest. Jared Taylor would have made another good interview subject, since Leftists were disrupting AmRen conferences long before anyone ever gave a shit about ethics in game journalism. The only content of this type in Silenced consists of several brief clips of a Leftist demonstration at one of Ben Shapiro’s speeches, including a scene where Feldman is menaced by a #BlackLivesMatter supporter.

While Silenced’s subjects do a good job of explaining the issues, these omissions are glaring and hurt the film’s effectiveness. “Show, don’t tell” is one of the foundations of narrative storytelling, and Silenced spends way more time telling than showing. While Feldman’s direction is adequate, there’s very little to say about the film’s style, and Silenced has a habit of dragging its interviews out too long. In particular, the “Religion” segment early on is a drag, because it features just two subjects—an Orthodox priest and a rabbi—who yammer on for an eternity. At times, Silenced feels like Jordan Owen’s cut of The Sarkeesian Effect, a film so wretched that watching it gave me a throbbing headache. The only visually stimulating portions of Silenced are the aforementioned protest clips as well as an interview with Pax Dickinson that has him reclining in a lounge chair in the woods. Contrast this with The Red Pill (another recent Cernovich production), which adds pathos to its narrative by sketching the geography of the human face.

Lest you think I’m being too negative, I enjoyed Silenced in the end. The breadth of interview subjects in the movie is one of its highlights, and because the film avoids getting dragged down in ideological mud-flinging, it stands a strong chance of converting average people to the cause of free speech advocacy. In particular, Silenced wisely gives much of its screen time to Dershowitz, who accurately breaks down the struggles freedom of speech faces in today’s society, from college indoctrination to social media cocooning. However, given Cernovich’s and Feldman’s credentials, the final product left me underwhelmed. The former is an accomplished author and journalist whose mindset techniques helped save my life; the latter has put together great films such as the lighthearted documentary American Milo and Un/Convention, an inside look at this year’s Republican and Democratic National Conventions. I guess I expected more.

In the end, Silenced: Our War on Free Speech is worth the watch: it explains why the reign of private censorship in our culture is a problem. If you have politically unaffiliated friends, you should urge them to see it. However, its direction and editing make watching it more of a slog than it should be.