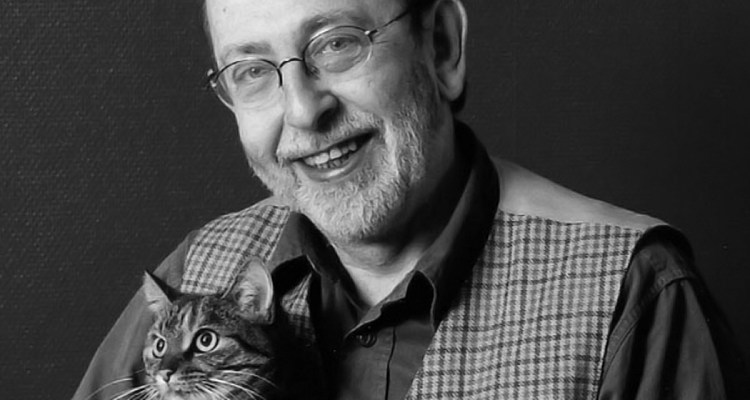 Alain de Benoist takes a break from political analysis to discuss one of his great loves: cats, as well as their history as the companion of writers and in mythology, and whether by nature cats are more Right- or Left-wing.

Last Monday, August 8, was International Cat Day, and Alain de Benoist is a well-known cat lover. The journal Krisis reproduced the following interview with him in French from the magazine Flash, 25 August 2011, on their Facebook page to mark the occasion. Nicolas Gauthier was the interviewer. It was translated by Eugene Montsalvat.

The cartoonist Siné said that as long as there are no police cats, he would prefer cats to dogs. A bit facile, as a definition?

Don’t be too severe with Siné. Starting from the end of the 1950s, his drawings of cats based on word-play (cha-viré, cha-loupe, cha-pitre) have done much for the feline cause. That said, we may prefer the paintings of Léonor Fini!

The cat, the favourite animal of writers… Still a cliché?

I don’t have precise statistics, but the fact seems true to me. ‘If you want to be a writer, have cats’, said Aldous Huxley. Michel Tournier wrote regarding the cat, ‘The ability that it has to be able to walk among the books and inkwells without disturbing anything, makes it the ideal companion of the writer.’ ‘Writers like cats’, adds Robertson Davies, ‘as they are marvelously silent, adorable, and intelligent beings. And cats like writers for the same reasons.’

From Montaigne and Du Bellay to Julien Green and Jacques Laurent, through La Fontaine and Perrault (the Puss in Boots), Chateaubriand, Théophile Gautier (My Private Menagerie), Hippolyte Taine, Mérimée, Barbey d’Aurevilly, Baudelaire, George Sand, Sainte-Beuve, Anatole France, Jules Verne, Pierre Loti, Colette, Cocteau, Jean Giono, Drieu La Rochelle, Albert Camus, Marcel Aymé (The Tales of the Perched Cat), Paul Morand, Jouhandeau, Faulkner, Hemingway, René Char, there is no end to counting the writers who not only dedicated a veritable cult to cats, but also celebrated them in their work. Maupassant even founded, along with Alexandre Dumas, a league for the defence of felines. Montherlant sent Roger Peyrefitte, who had mentioned the death of his mother, a telegram: ‘Have courage. Don’t get married. Don’t join religious orders. Buy a cat.’ Malraux asked that the statue of Bastet, the Egyptian cat-goddess, be placed near his coffin. What would Céline be without Bébert? And Paul Léautaud, who would never leave his thirty cats?

A possible explanation is that writers often have a feminine psychological component. But, the cat has always been considered as a symbolic representative of femininity (whose most beautiful attribute, it’s well known, is the ‘pussy’). Projection?

The cat is taken for an ‘animal of the Right’, but what Right could it be? In that case, if the dog is ‘Left wing’, what Left do we speak of?

The Left-Right divide no longer signifies anything important today. Concerning cats and dogs, I find it totally inappropriate. Some great lovers of cats like Hugo, Zola, or Boris Vian were not, that I know, men of the Right. You know the emblem of the anarchists of the CNT is a rioting black cat? The independence of cats – they are animals we’ve domesticated, but that we don’t train – doesn’t place them especially on the Right, as the ‘Rightists’ prefer dogs in general, faithful servants of the traditions of the hunt and the established order. The man of the ‘Right’ has the taste for authority. He likes to be obeyed. The ideal of any security agent (rarely a man of the Left), it’s rather: ‘Heel, Rex, sit!’

In Oriental tradition, the cat has often been deified; the dog a bit less. How to explain this difference in treatment? Would the dog be ‘European’ and the cat ‘Mediterranean’? In Greece, we see more cats than dogs in the streets…

It’s a contestable dichotomy. The Arabs are said to neither like cats or dogs, but legend tells that the Prophet Muhammad, wanting to put on his robe, found his cat Mu’izza sleeping on one of its sleeves one day: rather than disturb it, he cut the sleeve off and let it sleep. In Ancient Egypt, they revered the cat-goddess Bastet, who maybe originated from a lioness. In Europe, it is true that the Celts seemed to prefer dogs (the name of the great hero Cúchulainn means ‘dog of Culann’, while Cenn Chaitt, ‘head of the cat’, is the name of the usurper Cairpre, who would cause the ruin of Ireland), while the Germanic religion left us the memory of the goddess Freyja, whose chariot was pulled by two cats named Bygull and Tregull. The daughter of Njörd and twin sister of Freyr, Freyja (who name is similar to the German word Frau, ‘lady’) was the most popular and most venerated deity in the Nordic countries. Goddess of beauty, earth, and fertility, she was also considered as the first of the Valkyries. We can compare her to the Greek Artemis, accordingly among the Romans, cats were associated with Diana the huntress, whose cult was assimilated with that of Bastet.

Yet there are many people who don’t like cats!

Beware! We have numerous empirical studies showing that there exists a close correspondence between the preference for cats and the ‘cat temperament’, or the preference for dogs and the ‘dog temperament’ among men. When we encounter someone who doesn’t like cats, we know immediately that we will not sympathise with him. How we cannot love them remains a mystery for me, anyhow. ‘Life without music would be an error’, said Nietzsche. Same thing with cats. As for those who would harm cats, they deserve life in prison (they would evidently be guarded by dogs). But the worst is when ideological or metaphysical considerations justify felinophobia. The cat has long been considered as a ‘diabolical’ animal. Friends of cats never forget, each morning, to vow eternal execration on Pope Gregory IX who, by the Bull Vox in rama (1233), declared that any person possessing a black cat deserved the stake, and Pope Innocent VII, who promulgated an edict in 1484 prescribing sacrifices of cats for popular feasts. The goddess Freyja, in the meantime, had been equated to a demon.

Give us some good reasons to like cats… Give us just as many not to dislike dogs, considering that we need some for everybody!

Taine wrote, ‘I have studied many philosophers and cats. The wisdom of cats is infinitely superior.’ Théophile Gautier, however, defined the cat as a ‘philosophical beast’. Thus, a draw. Actually, there is, strictly speaking, no reason to like cats, as love has its reasons that reason ignores. But, with cats, it’s not friendship which is implied, but love. We could say only that they advantageously replace guardian angels! The dog, he is man’s best friend. So there are many reasons to have one. Besides, contrary to what some people believe, there are even dogs who like cats!