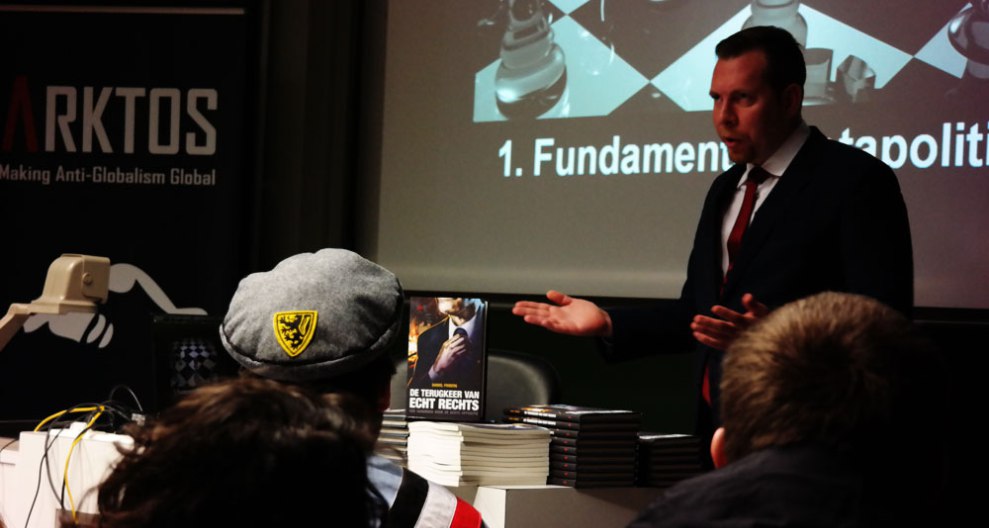 ‘Hopefully, the eastern half of Europe can inspire the Western half to take a more nationalist and conservative direction, while the Western half can serve as a warning to Eastern Europe of how bad things can get when you adopt ethnomasochistic principles and allow the mass immigration of non-Europeans into your countries.’

You are the CEO of Arktos, which is today the major publisher for various alternative-Rightist currents. Why do you think Arktos turned out to be such a success?

Thank you. Since I was one of its founders, as well as its CEO from the start, I know quite well what the main factors of our success have been.

First, we invested quite a lot of our own savings in the company from the start, which made it possible to pursue a quite aggressive strategy when it came to purchasing the English rights to the key works of the most important authors of the European New Right, as well as commissioning several translations of the traditionalist works of Julius Evola.

Secondly, we managed to keep our overhead costs to a minimum during our first years by having our main office and key personnel – including myself – located in India, which was quite an adventure but also very tough at times, and I was happy when we were able to move our operations to Europe in January 2014.

Thirdly, we are fortunate to have developed a large network of highly skilled and ideologically-motivated translators, editors, proofreaders, and graphic designers in addition to our core staff, and thanks to this we have been able to reach the level of quality in our publications that our ideas deserve, and our readers and supporters appreciate this.

What plans does Arktos have for the coming months or years?

We are currently working on more titles simultaneously than ever before. After a successful Kickstarter campaign which raised 8000 GBP towards translation costs for the three latest titles by Guillaume Faye – Archeofuturism 2.0, Understanding Islam, and Controversy and Society – we recently contracted two professional translators to work on these, and expect to have at least the first two published by this autumn. We are also working on several new translations of Julius Evola. And last but not least, we just successfully completed another Kickstarter campaign to raise the funds for the translation of Alain de Benoist‘s magnum opus, Vu de droite (View from the Right), into English, which will be one of our most important titles so far.

Which books do you think every young nationalist or Rightist should read?

I think the best books to start with are Generation Identity by Markus Willinger, New Culture, New Right by Michael O’Meara, and my own book, The Real Right Returns. Together, these books will provide a good ideological foundation for anyone just starting to discover our realm of ideas. After those books, I think Alain de Benoist’s Manifesto for a European Renaissance is a good complement, as is any book by Guillaume Faye, especially Why We Fight, Archeofuturism, and The Colonisation of Europe.

You recently wrote a book yourself, The Real Right Returns. What do you mean when you talk about the ‘real’ Right? Is there also a false Right?

Yes, there is. In post-war Western Europe, the old Right-wing parties were basically destroyed, and in the past 50 years we have had something I refer to as the ‘pseudo-Right’, which is basically the liberal Right.

These are not genuine Right-wing parties. As the title of my book suggests, we should point out the differences between the false ideology of the pseudo-Right – which is based on Leftist and Cultural Marxist ideas, as well as liberalism which, after all, is a revolutionary, Leftist ideology – and the real Right.

The American neoconservatives also represent this ‘false Right’. They are former Trotskyists who infiltrated the Republican Party and seized power. Neoconservatism has nothing to do with real conservatism – this is just a false, extremely liberal form of ‘conservatism’ combined with a very aggressive, interventionist foreign policy which most often serves globalist rather than national interests.

Neocons are really Leftists, except for a few symbolic positions which they adopt like opposition to gay marriage. In this way they make people think that they are of the Right, but in practice, the deeds of neoconservative presidents don’t differ much from those of the Democrats. This is why it’s fascinating that somebody like Donald Trump has appeared, whom I regard as part of the return of the real Right.

In Eastern Europe, this trend has been present for a longer time, but it’s quite a new phenomenon in Western Europe. Of course, parties like the French National Front or the Sweden Democrats have been in existence for a while, but in general, with the exception of the Austrian Freedom Party, they have been for the most part marginal forces. But now we are witnessing a trend reflecting an explosive rise in the popularity of all of these parties.

This tendency is not at all unexpected, considering that Europe and the West are under attack, and we are in the middle of an invasion. The return of the real Right is like the appearance of antibodies to fight the infection that is currently plaguing Europe.

You place a lot of emphasis on metapolitics. What is metapolitics, and how can nationalists use it?

Metapolitics is political work carried out external to the parliament and the political process. Its goal is to shape opinions and influence the cultural and educational institutions of a society, rather than working through the processes of party politics.

The media and entertainment industries also lie within this field of action. Liberals have been following a very well-planned strategy when it comes to metapolitics, and we can see its disastrous results today in the ongoing destruction of Europe’s societies.

The real Right must reconquer the media and the cultural institutions from the radical Left and the liberals. The Left very quickly understood their importance. They put a lot of energy into educating themselves to become journalists and to take up positions at other important opinion-forming institutions. It is time to take those institutions back.

While most of the radical Right criticises the European Union, your ideas have something of a ‘European nationalism’ about them. Are you in favour of a European superstate?

Of course not. I am in favour of a Europe of strong and independent nation-states, governed by traditional values and imbued with a pride in our own cultures and our common European civilisation.

I regard today’s EU as a failed project, dominated by liberalism and subservience to globalist interests. I do, however, believe in cooperation on a Europe-wide basis, especially when it comes to securing our outer borders. This is more important now than ever before, when we are in fact facing an invasion from both economic migrants as well as radical Islamists, who are coming to our continent in order to occupy it and transform it into an Islamic caliphate.

Sweden is often seen as the most politically-correct country in Europe. How do you view that, as a Swede? And do you think the rest of Western Europe will follow in Sweden’s footsteps?

That is indeed a very sad but true statement. The reasons for this are primarily because of the efficiency and skill exhibited by the extreme liberal-Left’s metapolitical project, as well as the fact that Sweden was not involved in any war for over two hundred years, which softened and feminised the population and made it more vulnerable to liberal and Marxist subversion.

The Leftist infiltration of the media and cultural institutions had its breakthrough in 1968, and reached its culmination a few years ago. We are now living in a ‘post-peak-political correctness’ society, where alternative media outlets are gaining more ground, and where a greater number of people are coming around to our way of thinking all the time.

My assessment is that this is a trend all over Europe, and that the risk is becoming quite small that other European countries will follow in Sweden’s footsteps over the past few decades – on the contrary, I believe many non-Swedes view Sweden as a warning regarding which path not to take.

Do you think the migrant crisis and the recent terrorist attacks are changing the way Europeans look at immigration?

Without a doubt. And it is sad that it took such extreme events as these for people to wake up from their politically correct slumber. Nevertheless, this has had obvious effects on the general sentiments towards immigration all around Europe as well as in the US. Hopefully it will speed up the process of the normalisation of European public discourse before too much demographic damage has been done to our continent, with fewer innocent lives being lost before we can put things back to normal.

You live in Budapest today. Do you think there is a difference in mentality between Western and Eastern Europe?

Yes, there is. The countries of the former Soviet bloc in Eastern and Central Europe are proof that Communism, in spite of all its crimes, oppression, and ridiculous premises, was in the end much less destructive for its subject nations than the liberal ideology which has dominated Western Europe for the last half-century. While Communism did a lot of irreparable damage to the nations of the Soviet bloc, it was not nearly as efficient in eroding national and cultural identities as liberalism has been. We can clearly see the result today in the fact that Hungary in particular, as well as Slovakia, the Czech Republic, Poland, and much of the rest of Eastern Europe, have more conservative and traditionally-oriented governments which are reluctant to fall for the ‘refugees welcome’ nonsense and other Cultural Marxist ideas that are commonplace in Western European media and political life.

Hopefully, the eastern half of Europe can inspire the Western half to take a more nationalist and conservative direction, while the Western half can serve as a warning to Eastern Europe of how bad things can get when you adopt ethnomasochistic principles and allow the mass immigration of non-Europeans into your countries.

Ultimately, we should realise that we are facing the current threats to our civilisation together, as a continent, and in that regard we should be thankful that at least half of our continent has managed to keep its sanity – it will be sorely needed in the tumultuous times we have ahead of us.

Thanks for the interview. We wish you and Arktos all the best!

Thank you for the opportunity – I wish you all the best as well.