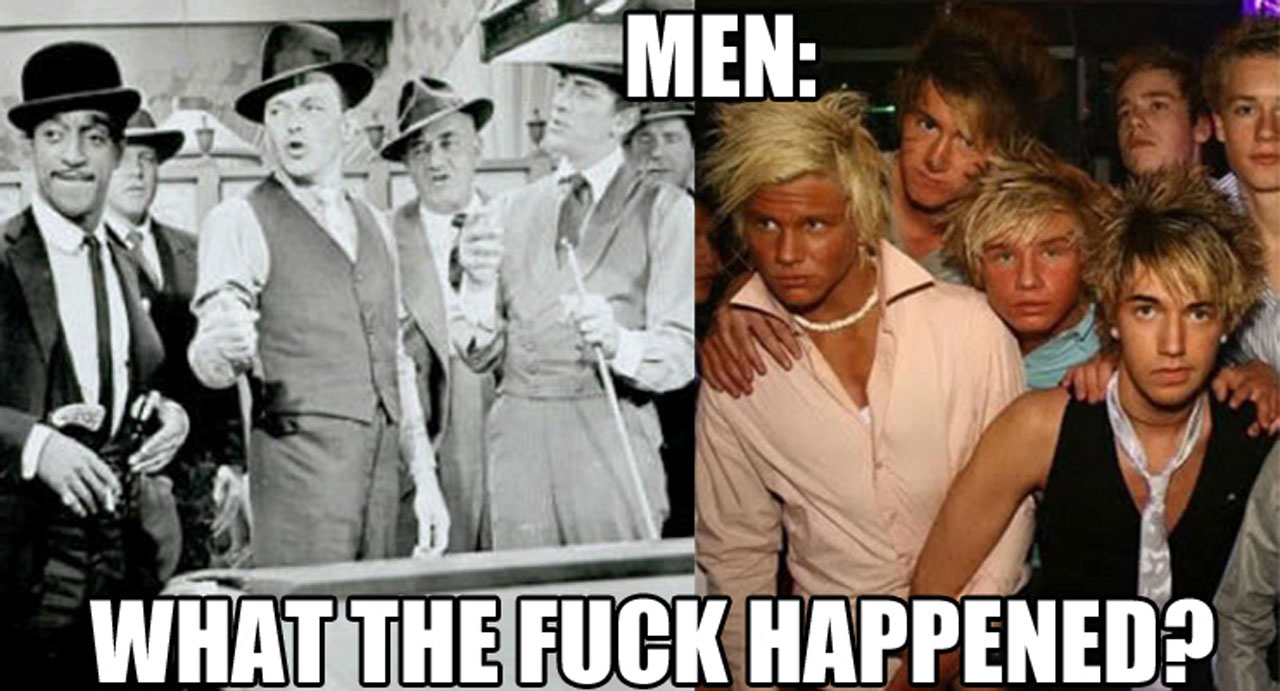 In some of my earlier works I have defined ethnomasochism as a pathological tendency widespread among persons of European origin to devalue themselves via a kind of ‘self-racism’, a hatred and shame of themselves which gives them some sort of neurotic pleasure. Obviously, this suicidal psychosis is supported by the dominant ideology whose moral blame and inferiorisation of the White man constitutes an essential paradigm.

Concurrent with this ethnomasochism we find xenophilia: the immoderate and systematic love of the foreigner or the ‘Other.’ In general, asserting a White identity is a sin (racism), while asserting an African identity (especially if it is thought of as superior) is a virtue.

Divirilisation is a concomitant process, almost physiological, by which a large number of White men (though obviously not all), especially among the younger generation, lose the qualities proper to virility: physical courage, individual and collective pride, a sense for protecting women (it should go without saying that manliness has nothing to do with machismo). In order to reclaim their masculinity, a number of decultured young White men who come into touch with the foreign majority in certain neighbourhoods adopt the behaviour, the gestures, and the talk of foreigners. This is a symptom of barbarisation.

Both of these pathologies obviously have numerous implications and strong sexual and reproductive sources, so we must examine these sources without speaking here of their other aspects in other domains. I shall mention several elements of which there are many examples and which are symptomatic both of ethnomasochism and of divirilisation.

First of all, the sexual overestimation of Africans and, to a lesser degree, of Arabs, transmitted by the media, popular rumour, advertising, and the pornographic industry, as previously mentioned. This cliché contributes to the self-satisfaction of the men involved, conscious of enjoying a sexual attractiveness greater than others. This feeling also compensates for their poorly repressed inferiority complex when it comes to intellectual matters.

We also find, but to a lesser degree, among white men (especially in progressive milieus) the idea of the sexual perfection of the Black woman, bound up with the idea (no longer of the length of the penis, obviously) of their prominent buttocks.

All this is associated in the Western imagination with the physical superiority of Blacks and Arabs, with this conviction coming from spectator sports. Associated with this prejudice, we find that of the ‘physical perfection’ of the bodies of Blacks.

Two remarks must be made: first, we note the contradiction in egalitarian and anti-racist discourse between the affirmation of equivalence between the races?—?and in fact a denial of the existence of races in favour of purely individual genetic differences?—?and a proclaimed belief in the physical superiority of Africans. As always, anti-racist discourse destroys itself and brings with its attributions another, concealed form of racism, which is the inferiorisation of Whites, but also the suggestion of the animalism of Blacks.

Second of all, the large number of White girls and women who take lovers or husbands ‘of colour’, for reasons discussed above, contribute to and aggravate the devirilisation of Whites. Moreover, in advertising and on television shows, the effeminate homosexual is always of European origin.

Among White women who take a boyfriend, lover, or husband ‘of colour’ we also find the consequences of the romantic individualist syndrome, which is opposed to the idea of ethnic lineage (‘I’ll love whomever I wish!’), the destruction of all racial consciousness (the consequence of long ideological formation involving the unconscious), the need to set oneself apart and make oneself interesting vis-à-vis an entourage who would never have expected that, and an unreflective romantic appetite?—?typically feminine, for adventure?—?the unknown. The 1960s American movie Guess Who’s Coming to Dinner with Sydney Poitier was one of the launch pads of this transgression.

Then we find women who prefer sterility and ephemeral amours to living as part of a couple, or who opt for homosexuality. They complain that men ‘are unreliable’. Are they really wrong? They are reacting in such cases against the divirilisation of men.

Now, here is something that looks very paradoxical: the feminist reflex to do without men, to demand the autonomy of the woman without children or husband, rests on disappointment and nostalgia: the suppressed desire for a man as head of the household, a tutelary and protective authority.

The spectacle offered by contemporary European man, above all to those of the younger generation (which is extremely serious), is of a man marked by softness, more or less effeminate, with a vacant look. You can find good examples among those chosen for ‘reality television’.

As another ethnomasochistic symptom, we should mention the suspicion of White natality, guilty of a sort of implicit and masked ‘racism’. The large native European family is struck with a sort of low-intensity opprobrium, the object of mockery, of poorly dissimulated hostile irony. The wife in such a family is supposedly exploited and subservient, like a mother cat encumbered with kittens, damned to the raising of children as well as household tasks. The White ‘housewife’ is an anti-model, eclipsed by that of the woman CEO or employee, sterile or at least with no more than two children. On the other hand, the prolific African (or North African or Turkish) family established in Europe is the object of every solicitude. The permanently pregnant African mammy living at the expense of the native taxpayer, whose progeny encumber the maternity wards and nursery schools, and who is crushed beneath the wait of her household tasks?—?the feminists have nothing to say about this. There is no question of ‘family planning’ for them.

So this is really a case of what is good for the goose not being good for the gander. Here we have reached the very heart of ethnomasochism. Court intellectuals have invented a term to legitimate their choice for a multiracial society (if possible, with ever fewer Whites): they reject the monochrome society, that is, as formerly in Europe, one entirely composed of Whites. But they find it perfectly normal that African society should be ‘monochrome’ and entirely composed of Blacks, because ethnomasochism is always accompanied by its counterpart: xenophilia.

The above text is an excerpt from Guillaume Faye’s Sex and Deviance (Arktos, 2014). If you liked this selection, be sure to check out the whole book.