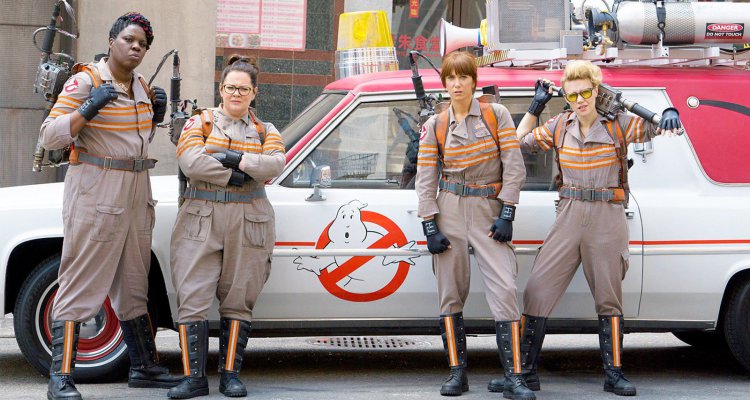 Ghostbusters and the Suicide of Cultural Marxism

It’s not enough for Hollywood to constantly recycle the past: they need to spit on it as well. The all-female Ghostbusters reboot is a fine example of this, and it’s a massive bomb that drips with contempt for White men and normality.

Whenever communist or socialist regimes rise to power, one of the first things they do is destroy the cherished symbols of the nation. The Soviet Union replaced Christmas with Stalin’s birthday and declared Ded Moroz (the Russian equivalent of Santa Claus) to be an affectation of the hated kulaks; Maoist China eradicated Confucian principles of filial piety by training children to spy on their parents and rat them out to commissars. The end goal was to sever any ties the population had to their families or cultures, replacing them with absolute loyalty to the state.

The recently released grrl power Ghostbusters reboot was birthed according to the same logic: it’s a Marxist defilement of a classic American film. Granted, a lot of the nerd whining about modern adaptations of cartoons/toys from the 80’s or earlier is itself a sign of cultural decline; if you’re crying about how Hollywood “ruined your childhood,” you’re a manchild who needs to grow up. The problem is that Americans didn’t simply kill God: we dumped His corpse on the side of the road for the buzzards to feast on. Pop culture effluvia is the only thing left that unites us as a people.

Feminist Ghostbusters is a terrible film for many, many reasons. It’s a confluence of Hollywood’s worst trends, from creative necrophilia and rapid-fire ADHD editing to an excess of CGI and characters who can’t have a conversation without screaming at each other. But more importantly, Ghostbusters is repulsive because it’s a deliberate subversion of a cherished piece of American culture. From beginning to end, everything about the movie is designed to slap White men in the face.

The film’s plot is largely the same as the 1984 original, revolving around a team of parapsychologists who specialize in catching ghosts. Kristen Wiig plays Dr. Erin Gilbert, a Columbia professor who is drawn back into studying the paranormal when she joins her ex-partner Dr. Abby Gates (Melissa McCarthy) and Dr. Jillian Holtzmann (Kate McKinnon) to investigate a ghost sighting at a mansion. Eventually, the three of them (plus MTA worker Patty Tolan, played by Leslie Jones) are shanghaied into stopping Rowan North (Neil Casey) from bringing about the apocalypse.

While it certainly wasn’t impossible for the Ghostbusters reboot to be a good film, it’s clear the creators went out of their way to be as unfunny as possible. I attended a matinee screening of the movie, and not only was the theater barely a third full, almost no one laughed the entire time. Much like the similarly hyper-PC, female-focused Star Wars: The Force Awakens, Ghostbusters is oblivious to the fact that its plot is driven by grimy, shopworn clichés. For example, token Black character Patty Tolan is a coward who is always running from danger, while the porcine Abby Gates is constantly eating (one particularly bad running joke involves her favorite Chinese take-out joint constantly messing up her orders).

Feminist Ghostbusters also ratchets up the anti-White, anti-male hatred to headache-inducing levels. For example, Chris Hemsworth portrays the Ghostbusters’ mentally damaged secretary Kevin, a clear stand-in for Annie Potts’ character in the original film. Thing is, while Janine Melnitz was ditzy and a bit slow, she was also lovable, charming and the protagonists respected her. The lady Ghostbusters treat Kevin with such eye-rolling contempt—and he’s so incompetent at his job—that it’s inexplicable why they don’t fire him or he doesn’t quit. Bill Murray also makes a cameo as a Penn Jillette-style skeptic who questions the Ghostbusters’ honesty and gets defenestrated in the process.

But it’s the film’s antagonist Rowan who truly gets the short end of the stick; he’s a socially retarded weirdo despised by everyone he meets. You can practically visualize the writers muttering “Fuck you, MRAs!” every time he pops up on screen. In fact, during the climax, McCarthy’s character taunts him by saying he “left [his] virginity in the Lost and Found,” and the final battle scene ends with the feminist Ghostbusters shooting Rowan (after he morphs into a cartoon version of the ghost logo from the original movie, another insult to the fans) in the crotch. Subtlety and nuance are not on the menu.

Make no mistake: everything about Feminist Ghostbusters is intended to trash the film it was based on and spit in the faces of everyone who ever liked it. It’s full of Leftist dogwhistles and blatant assaults on Whiteness and masculinity, all the better to rope in the pop culture-addled SJWs who serve as corporate America’s most faithful drones. Given that young Leftists need Hollywood to constantly affirm their beliefs—see all the bombastic headlines about how Amy Poehler “crushed” men’s rights activists or how John Oliver “destroyed” Donald Trump—I expect we’ll soon see a wave of listicles about how Ghostbusters “demolishes” anti-feminists.

Unfortunately, it won’t be enough to save the movie from box office ignominy. Ghostbusters fans have been revolting against the reboot in epic fashion: the film’s trailer is the most downvoted movie preview in YouTube history, and its toys are so unpopular that stores are already putting them on the clearance rack. Subverting a nation with cultural Marxism is like boiling a frog, and Feminist Ghostbusters has cranked the heat up so high that the polliwogs are jumping out of the pot.

In response, the Left has been pulling out all the stops, from director Paul Feig accusing his film’s detractors of misogyny to others claiming that the original Ghostbusters is “mediocre.” This is a classic gaslighting tactic by profaners from Pussy Riot to Chuck Klosterman: attack a beloved symbol, get people riled up, then ridicule them for getting upset. “God, it’s just a movie. Stop taking it so seriously.”

Well, you can’t punch someone in the face and claim it’s a kiss, and you can’t spend millions of dollars creating a Marxist funhouse movie reboot and claim it’s no big deal. The original Ghostbusters is to cinema what Talking Heads is to music: something that everyone—young and old, Black and White, hipster and normie—can enjoy. It may just be a comedy, but it’s a well-rounded and funny one that sprang from an original idea (the film’s premise was based in part off of Dan Aykroyd’s paranormal research).

Feminist Ghostbusters has none of this. There’s zero freshness in the plot, zero warmth in the characters, and zero mirth in the dialogue. At best, it’s a rancid cash-in on an iconic film franchise; at worst, it’s an open assault on White men. Don’t waste your time with it.

TopicsfeminismfilmGhostbustersmoviesreview
Share on FacebookShare on TwitterShare on RedditShare on VKontakte