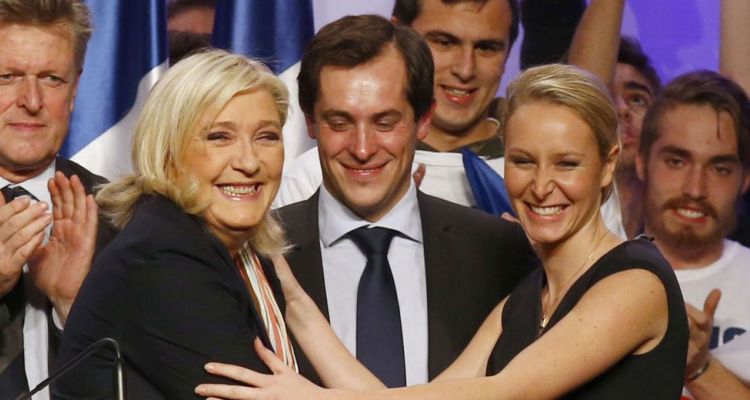 “The erasure of the Left/Right divide that looms ‘from above’, within the political class, is actually only the logical consequence of the erasure of this divide that has already happened ‘from below’, that is to say within the people… More than a third of voters have now shied away from the Left/Right divide, either by abstaining or by casting their votes for the Front National.”

Emmanuel Macron henceforth affirms loud and clear that he is neither ‘Left’ nor ‘Right’. That must make you happy, because you do not believe in the Left/Right divide. Would he stand by the same positions as you?

I would say rather by a symmetrically opposed position. The erasure of the Left/Right divide that looms ‘from above’, within the political class, is actually only the logical consequence of the erasure of this divide that has already happened ‘from below’, that is to say within the people. ‘What fractured France needs is social-liberalism’, Les Gracques (a Socialist think-tank-Ed.) recently proclaimed, this Areopagus of technocrats who advise Emmanuel Macron. Translation: the anti-system parties and the populist movements are strengthening their grip, and the System must close ranks in the face of electoral jacquerie.

Actually, the only true divide today is that which contrasts peripheral France to urbanised France, the people to the globalist elites, the ordinary folks to the ruling caste, the popular classes to the big globalist bourgeoisie, the losers to the profiteers of globalisation, the proponents of borders to the partisans of ‘openness’, the ‘invisibles’ to the ‘over-represented’; in brief, those below to those above. Perpetually disappointed by what Jérôme Sainte-Marie (political scientist and pollster-Ed.) calls the ‘convergence of the public policies conducted in the course of successive elections, that transcribe the communion of economic, political, and cultural liberalisms, under European patronage’, more than a third of voters have now shied away from the Left/Right divide, either by abstaining (or leaving their ballot blank), or by casting their votes for the Front National (FN). Feeling the proximity of the danger, the big parties of the government, who (rightly) believe themselves equally threatened, thus quite naturally envision putting an end to fighting each other to save what can be saved – especially if Marine Le Pen is present in the second round in 2017, none of them could rule alone if it wins, especially if the FN manages to constitute a parliamentary group.

Hence the current rhetoric in favour of a ‘grand coalition’ of governing parties, that is to say a reunification of liberals of the Left and Right, presented as the necessary condition for a true implementation of necessary structural reforms to ‘redress France’. Against the protesters and rebellious of both sides, it acts to reunite the Right and Left of the marketplace, partisans of globalisation and ‘reformers’ of all stripes, ‘modern Left’ and ‘realist Right’ in the same ‘circle of reason’ (Alain Minc), all adepts of a ‘social-liberalism’ that they try to sell us today as the solution to future problem, in order to proceed with reforms. It’s evidently in this context that we must situate the insistent rumors reporting an executive branch of the type ‘Juppé at the Élysée, Macron at Matignon‘, both linking themselves to an orléanist current whose philosophy could be summarised with this principle: leave the strongest and richest to do what they want, the poor and the weak will be better off!

Is the conjuncture ready?

In a currently tripartite electoral space, the regional elections already constituted the prefiguration of what could be the second round of the presidential election: everyone against Marine! But the recent Austrian presidential election is equally telling, which saw 86% of workers vote for Norbert Hofer, the candidate of the FPÖ, and the two big governmental parties collapse to the benefit of the populist candidate, whose ecologist adversary only won by an extremely close margin thanks to the voters who only rallied to him by default. In either case – and as was already the case in the referendums of 1992 and 2005 – what happened was anything but a traditional confrontation of the Left/Right type. In France, a Socialist Party on the verge of explosion, and the Republicans without a credible project, also fear being eliminated in the future like the ‘blacks’ (Christian Democrats) and the ‘reds’ (Social Democrats) in Austria. Hence, yet again, the idea of reuniting those who think nearly the same thing about Europe, the United States, the economy, globalisation, the liberalisation of capital, and so on, who would return to abolish politics to the benefit of a ‘programmatic convergence’ dictated by the business world and the expertocracy. The administration of things would replace the government of men, as Saint-Simon already said.

Many European countries have already implemented this dream of ‘national union’ or ‘grand coalition’. With what results?

A study published in L’Expansion in March 2015 scrutinised the performances of nine governmental coalitions since 2007. The results are overwhelming. On average, the national wealth of the countries under coalition decreased at a pace of 0.2% per year, while that of the eurozone countries as a whole increased 0.2%. Moreover, the countries under coalition practiced an austerity policy even heavier than the other countries of the eurozone, a policy that did not cause increased growth or lowered unemployment anywhere. Whether it was the Netherlands, where a liberal-labour coalition has been in power since 2012, in Italy during the Monti experience, in Finland, in Ireland, or in Sweden, to say nothing of Greece in the epoch of the PASOK–New Democracy alliance, the coalitions were not allowed to carry out the announced reforms. Only the Christian Democratic Union–Social Democratic Party alliance in Germany was able to pull it off.

This interview with Alain de Benoist was posted in French on 7 June 2016, on the Boulevard Voltaire Website. Nicolas Gauthier was the interviewer. It was translated by Eugene Montsalvat.