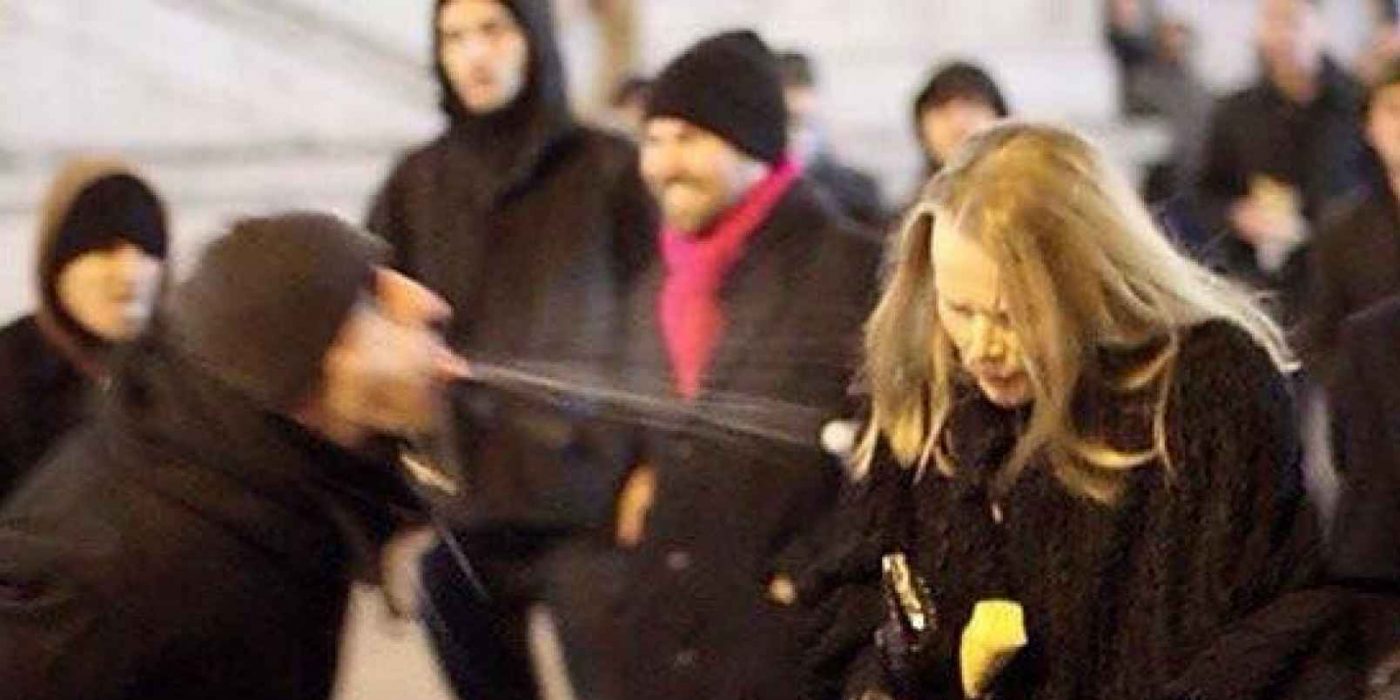 The Media’s Distortion of Illegal Immigration

“To awaken pity in the hearts of the public and the souls of politicians using some borderline cases in an effort to legitimise the entry of ‘unfortunate’ illegal immigrants – that is the objective of the humanitarian blackmail practiced by the media of our dominant ideology. And it is effective.”

The following is an excerpt from Chapter 1 of The Colonisation of Europe, which was recently published by Arktos.

One would think that we are reading the edifying books written in the nineteenth century on the topic of Christian martyrdom. The media publicise many stories of those unfortunate illegal migrants who have drowned in the Strait of Gibraltar, who have been brutalised during their repatriation by plane, or those who have been kept in ‘inhumane conditions’ for a period of three days, in detention centres of course, before being released into the wild. To awaken pity in the hearts of the public and the souls of politicians using some borderline cases in an effort to legitimise the entry of ‘unfortunate’ illegal immigrants – that is the objective of the humanitarian blackmail practiced by the media of our dominant ideology. And it is effective.

We blow things out of proportion through the patient work of press agents who belong to immigrationist lobbies, focusing on three or four emblematic and moving cases every month. The media jump at the opportunity and distil in the public opinion the double idea that, first, evictions are inhumane, and second, so is the refusal to grant visas and to naturalise them. The cases are very diverse: a clandestine immigrant who was mistreated or who died during a deportation, ‘undocumented migrants’ in a tragic hunger strike, a young mobster who fathered a French child and, torn apart, refuses to accept his own expulsion, and so on. The dramatic imagination of the colonisation party is boundless and endowed with a fearsome efficiency at making people’s eyes brim over with tears. This is what the cynical strategy of pity is all about, a strategy whose purpose is to frighten governments away from the idea of applying its wicked laws…

In August 1999, two Guinean schoolboys, Yaguine Koita, 14, and Fode Tounkara, 15, hid themselves inside the housing of the landing gear of a Sabena Airbus on the Conakry-Bamako-Brussels flight. They hoped (and rightfully so) that if they arrived safely, no one would evict them. Unfamiliar with the laws of aeronautics and the effects of altitude, these two runaways obviously died of hypothermia and respiratory failure (at 10,000 metres, the temperature drops to -50 degrees Celsius, and the air pressure drops drastically). However, what happens next is that we find an uplifting letter on one of their bodies, along with a two-page petition where every single word is misspelled, in which they adjure the ‘Excellencies and gentlemen responsible for Europe’ to welcome them and help Africa as a whole, because of the ‘war’ ( although there is no war in Guinea) and their families’ miserable living conditions (the consequent investigations demonstrated that they led a modest life but were not in need). The full contents of the letter were reproduced by the Belgian and French press.

Public opinion cracks and a concert of lamentations ensues. If these two ‘children’ (at the age of 15, one is no longer a ‘child’ in Africa) died, it is obviously our fault, due to our refusal to welcome all the ‘unfortunates’ of the Black continent without arguing. Le Figaro (5 August 1999) reports, ‘The letter, which was published by the press, arouses considerable emotion in Belgium. The fact that the content of the letter was revealed verbatim by the French press gives it a national dimension. It comes less than one year after the death of a young Nigerian, Semira Adamu, during a deportation attempt by the Kingdom’s police forces.’ The Belgian government soon had a small meeting behind closed doors to deal with this crucial matter. A highly pompous funeral ceremony was held by the members of the clergy, who were moved by the events. This is not the case for the homeless people who die of cold and hunger in the streets of Brussels or Paris during the winter months. The Foreign Minister, Louis Michel, equally upset, sent his EU counterparts the following official message regarding the famous ‘letter’ found on the body of the two aliens: ‘Our ears cannot remain deaf to the outcry for a better life. We have to give Africa its hope back.’ In other words: we are to enhance our loans further, to increase the various kinds of aid offered to Africa (regardless of the complete loss that such aid entails), and to open the doors of the Union even wider for young Africans to use. The Belgian government has formally shared the two teenagers’ letter with its fourteen European partners and with our Federal Union institutions.

In the wake of this process, as was to be expected, the so-called Walloon and French anti-racist associations took advantage of the situation by criticising the overly strict migration control (when, in actual fact, our EU border controls are less strict than anywhere else in the world) and denouncing Europe’s ‘selfish’ attitude (while in the bottomless pit of Third World aid, Europe is the most gullibly generous of all). The National Development Cooperation Centre has issued a moving statement, worthy of the mea culpa stance of the Catholic hierarchy: ‘Two children came to die on our soil, falling from the sky with a message to the heart of Europe, to those who run the richest and most prosperous continent on the planet.’

The first thing to note is that the richest and most prosperous continent is actually North America, and that if the colonisation of Europe at the hands of Africans continues at this rate, our prosperity will be sold cheap.

Finally, no one has dared suggest that this tragic fairy tale was perhaps too good to be true: the two teenagers, whose school supervisor in Africa has revealed to the Guinean daily Horoya that they had not attended for a year, may well have been manipulated by someone who wanted to incite provocation, someone who had fabricated the famous letter in order to destabilise the fragile and emotional European opinions that are ever so open to accepting all sorts of guilt. This is certainly the view of the Guinean Interior Minister.

In short, for more than a week, the Walloon and French press devoted entire columns to this incident, relayed by the RTBF, France 2, and the German ZDF, the three most pro-immigration television stations of the European Union.

The repatriation of the bodies of the two boys to Conakry gave rise to scenes of mass hysteria where women rolled on the ground while invoking Allah. The Guinean Minister of Public Service, Lamine Kamara, flatly suggested that Europeans were indirectly responsible for the death of Yaguine and Fode. Always this good old blame… It is because the European visa policy is excessively restrictive that African candidates are pushed towards acts of despair, he explained. During a press conference held on 7 August 1999, the Minister said: ‘If he had obtained a visa in due form, Yaguine would not have opted for this method and would not be dead today.’ In other words, for many African leaders, the discourse aims to force the doors of Europe open through moral blackmail. It’s a colonisation that is achieved through mendicancy and pity.

This attitude of beseechingness and irresponsibility, which aims to force Europeans to support an African continent that suffers from a lack of capability (and that is poor despite its vast natural resources), as well as to assist that continent financially and to host the surplus that stems from its demographic weir, is perfectly summed up in this passage from the ‘letter’ found on the body of one of the clandestine teenagers (the spelling errors have been corrected): ‘If you can see that we sacrifice ourselves and expose our lives, it is because we suffer too much in Africa and need you to fight against poverty and end the war. This is impossible for us here, where nothing ever works. If I stay in Africa, we are bound to live unhappily until we die.’

This prose, no matter whether fake or genuine, caused great sentimental reactions from Louvain to Toulouse. The message is clear, but at the same time tragic: it confirms the inability of Africans to take charge of their own matters and is fraught with a kind of implicit self-racism: ‘Help us, assist us, welcome us on your soil, for we are unable to live in peace and prosperity on our continent.’

Inspired by their ethnomasochistic European colleagues, African intellectuals obviously argue that the misfortunes of Africa are the result of the culpability and crimes of colonialism and neocolonialism. But is there anyone who still believes such a Marxo-Leftist fallacy, the kind of fallacy that always hits the headlines of Le Monde Diplomatique?

Following the deaths of the two candidates for illegal emigration to Europe, the Guinean AFP correspondent Mouctar Bah sent an express fax where he stated, ‘If the borders were open, Guinea would empty itself of the vast majority of its youth. They all choose to come to Europe. It is a widespread state of mind in our country.’ And in a hundred other Third World countries…

The deaths of Yaguine and Fode, the young Guinean illegal immigrants who lost their lives while hiding inside the landing gear of the Sabena Airbus is a drama that has ‘upset Europe’, as stated by the President of the Strasbourg parliament, Nicole Fontaine. But are they not being selective in what upsets them?

On 4 August 1998, a teenage girl who was still a minor was raped, horrendously tortured, and then killed by two young Africans who had abducted her as she left the train station in Créteil and took her to a cellar. Once she was dead, they proceeded to symbolically urinate on her young and martyred body. Her ordeal and funeral oration were summarised in ten lines in the ‘small time’ section of Le Parisien (5 August 1998). She was not Guinean, but Polish. Her name was Angela P—…

To me, the memory of Angela is a thousand times dearer than that of Fode and Yaguine.