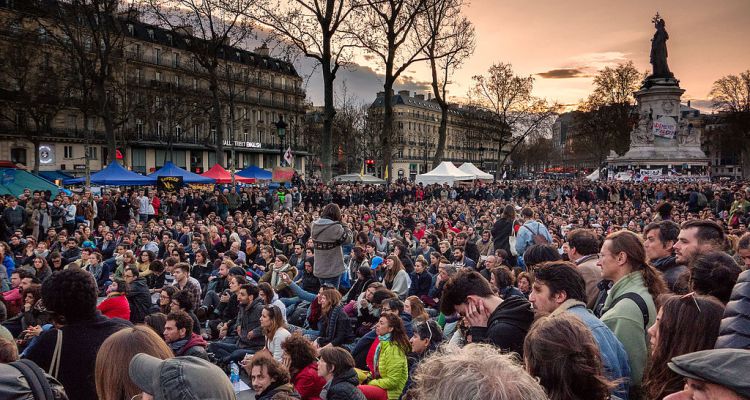 When One is Young Rebellion is Healthy

An interview with Alain de Benoist in which he discusses his impressions of Nuit debout, the demonstrations against labour reforms that have been ongoing throughout France since March, which has been compared to the Occupy Wall Street movement in the US.

The following interview concerns Nuit debout, which has been a series of occupations of public spaces and street demonstrations throughout France opposing proposed labour reforms that has been ongoing since March. It has been compared to the Occupy Wall Street movement in the United States from 2011.

Between certain media outlets having the tendency to idealise Nuit debout and its ‘participative democracy’ and those who only see a bunch of brainless and shaggy Leftists, can we at least see in this movement a renewal of the youth’s interest in politics?

I will begin with a clarification. You know that I am not one of these petty bourgeois reactionaries who shouts ‘chienlit Leftist’, and of course ’68er’, every time they see students or high schoolers overrunning the streets. That they are protesting against the infamous El Khomri law, whose initial version was drafted under the dictate of the MEDEF, and that the youth are worried about a future which only offers them unemployment and successive precarious, temporary, and menial jobs, seems to me rather healthy. If they do not rebel when they are 16, what will they be when they are 60? I also note that, after an OpinionWay poll published a month after the start of the movement, 70 percent of the voters for Marine Le Pen declare that they understand the movement, and 67 percent support it.

In a more general way, I do not have the least respect for the order that is in place, which is most often only an institutionalised disorder. Retrospectively, under the Ancien Régime, my sympathy is with the popular revolts and peasant Jacqueries. Under the Revolution, my sympathy goes to the Chouans, as a century later it goes to the Communards. Today, my principal adversary is not such and such governmental team, of the Right or the Left, but rather a liberal society (economic liberalism or societal liberalism) founded on methodological individualism, human rights, the belief in progress, the primacy of commercial values, and the adoration of the market.

That is to say I did not have any prejudice against the Nuit debout movement, which was born out of the excellent film by François Ruffin, Merci patron!,  which Frédéric Lordon could qualify as a ‘film of direct action’. From the start, as Jacques Sapir said, it was legitimate to see in it the expression of an immense political frustration with the height of treachery of the Socialist Party, together with a desire to ‘do politics differently’. A few evenings spent at the Place de la République rapidly disillusioned me.

Everything that is said there is not unsympathetic. Far from it. And it is a bit too easy to mock the merguez stands, the ‘transphobia workshops’, and the spaces forbidden to the ‘non-racially oppressed’. But we see from its general tone that it favours ‘for allism’ (Translator’s note: pour-toussisme, referring to the movement to legalise gay marriage; mariage pour tous, marriage for all; everything for everybody; and so on) and open borders, without forgetting the struggle-against-all-discrimination, which is like the trademark of a social liberalism that is unfit to situate itself in a perspective of true confrontation with the System. I do not confuse everything – ecologists, anarchists, ZADists, part-time workers, Trotskyists, thugs, riffraff – but I rather already see the inability to structure the movement as a result of sectarian intolerance (the pathetic eviction of Alain Finkielkraut) and the simple will toward violent confrontations. Short-term slogans, endlessly repeated questions and circular talk, vague objectives and hollow words, narcissistic indifference to reality. Far from seeing in Nuit debout a ‘crucible of citizens’ deliberation’ or a revolutionary movement (if only!), I see above all good little liberal-libertines who want us to accede to their ‘desires’ – not very different, basically, from those who believe in ‘fighting against terrorism’ by lighting candles, meaning typical representatives of this Homo festivus which was so well described by Philippe Muray.

Concerning this, a reference to May 1968 seems inevitable. Are these events of the same nature, and could they unleash an established political movement?

I don’t believe that for a minute. Nuit debout has no means to unleash an organised political movement for the simple reason that it has closed itself off to any prospect for social integration. May ’68 was marked by a general strike that we are not close to seeing again – and I regret that. It was also, despite all its ambiguities, a joyous movement. I see no joy in Nuit debout, but only an immature palaver that fails to hide a deeply depressive tendency.

A parallel has also been made with the Spaniards of Podemos, or the Americans of Occupy Wall Street. Do such movements participate in the same dynamic?

A movement like Podemos situates itself in a counter-hegemonic perspective that is nothing like that of Nuit debout. The defining characteristic of Nuit debout, on the contrary, is its incapacity to coordinate disparate struggles to spur on a true ‘estates general‘. I have nothing against the night walkers, but it is very evident that those who work don’t have the means to stay up until the early morning. The people must wake up early, so it is not surprising that they are absent from the Place de la République, where one searches in vain for workers on strike or revolting peasants. They only hold there, in the language of deaf-mutes, ‘popular assemblies’ without people and ‘general assemblies’ without any relationship to those in the large social movements. Jacques Sapir also said that ‘the capacity of this movement to join the popular classes of the great metropolises with the excluded of France in the little cities is one of the conditions for its survival’. We state, now, that this capacity is zero. The onlookers come to the Place de la République like they go to the zoo, to see the last representatives of a species on its way to extinction. The system is not worse off. ‘Nothing will have taken place but the place’, Mallarmé already wrote. It’s rather distressing.

This interview with Alain de Benoist was posted in French on 8 May 2016, on the Boulevard Voltaire Website. Nicolas Gauthier was the interviewer. It was translated by Eugene Montsalvat.