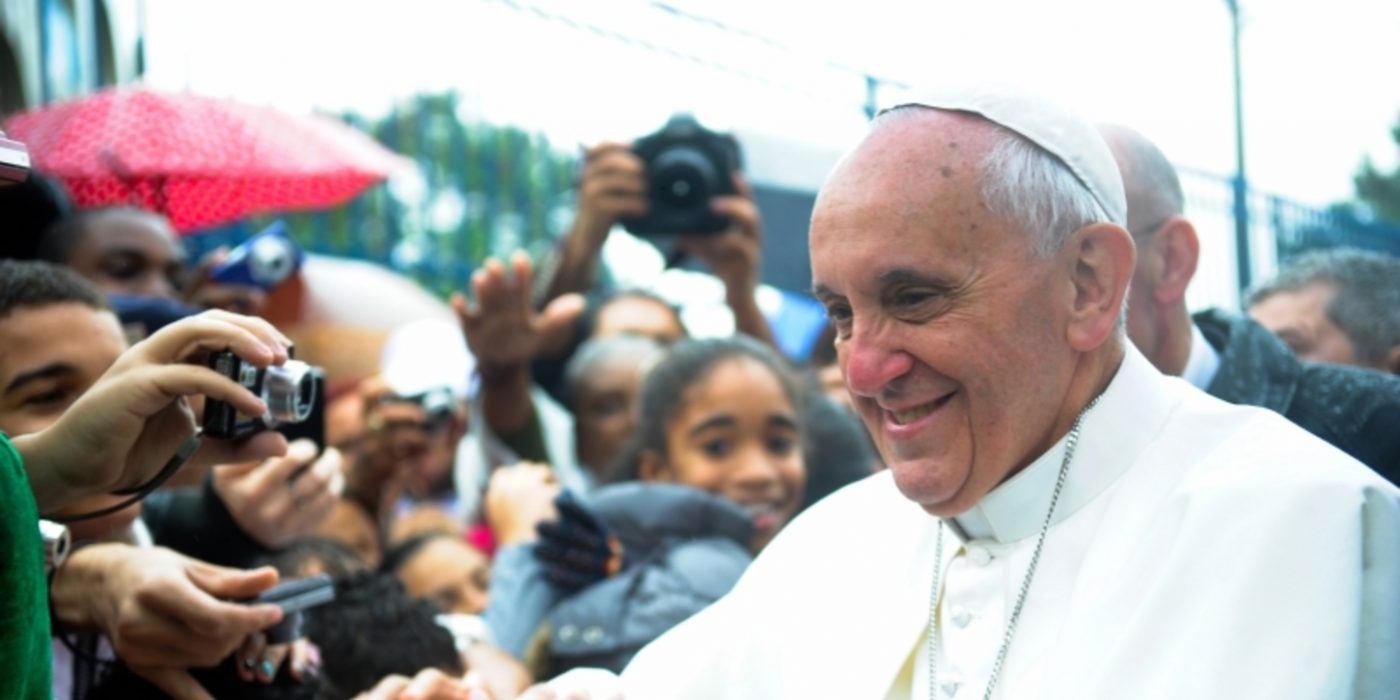 Who is Pope Francis Really?

Pope Francis’ rhetoric of shame is directed exclusively, and in a suicidal manner, against the European civilisation and ethnicity, and threatens to cause a schism in Catholicism.

In the name of Christian charity, Pope Francis has gotten the world used to approving and encouraging the idea of a home for all ‘migrants’, including Muslims, the colonisers of Europe. None of his predecessors had dared to risk such an exercise. On the island of Lampedusa, he engaged in ridiculous demonstrations of empathy towards illegals, blaming the unjustly accused Europeans of selfishness. But then, he went even further with his symbolic actions and political provocations.

He began in Rome, taking himself for Christ incarnate, washing the feet of Arab and African illegal migrants in front of the television cameras. These images went around the world and the message was clear: come, you are our masters and we are at your feet. Then, he notoriously neglected to defend those Middle Eastern Christians who are being persecuted by Islam in favour of housing Muslim illegal immigrants.

Returning from the island of Lesbos, Greece on 17 April, where illegals had arrived from Turkey, he returned to Rome with three Muslim Syrian families. All the women were veiled on the papal plane. He preferred them to Christian families, even though the latter are fleeing Islamic persecution. Whatever, it doesn’t matter.

The Pope went on to justify this in perfect, Jesuitical bad faith: ‘I did not choose between Muslims and Christians. These three families had their documents in order. On the first list, there were two Christian families, but they lacked papers. It is not a privilege’. There is something cynically icy in this ridiculous quibble about ‘papers being in order’. And the Pope added, speaking of the twelve Muslims he had brought to Rome in his plane: ‘These twelve are all children of God, and I prefer the children of God’. Lie: he has not privileged the ‘children of God’, but rather Muslims as opposed to the persecuted Syrian Christians.

The Pope, meddling in things that do not concern him, pressured Matteo Renzi, the Italian Prime Minister, to refuse to close centres for failed asylum seekers, these bogus refugees.1 They will be free to remain and spread throughout the Continent. In Europe, the Pope’s pronouncements are likely to earn him the enmity of many Catholics. This is not good for a Church which is already in bad shape.

This Pope, a South American Jesuit, actually defends an anti-European, anti-Roman ideology of fracture. Shaming and blaming Catholics and their opinions regarding the European ‘migrants’ is its main goal. He said, ‘We are all migrants’, which is just the kind of catch-all that’s typical of Leftist journalistic jargon. Coincidentally, the one who praises the Pope the most for his positions is…Jean-Luc Mélenchon.

His signals have heavy international consequences: an open door for the Muslim invasion is being recommended by the Pope himself; it’s a real ‘miracle of God’! For the Pope, Europe is a ‘homeland for human rights’ and not the home of a people and a civilisation. He argues for a Europe of open immigration. Moreover, in his ecclesiastical career in Latin America, he was already calling for open immigration in North America. He does not like the idea of an ethnically European country.

Already, after some illegal immigrants were shipwrecked off the coast of Sicily, and just after hosting some ‘refugees’ from African Lampedusa, he said, ‘I cannot recall so many victims as there were in this umpteenth shipwreck. The word that comes to mind is shame. […] Ask for forgiveness for so much indifference. There is anesthesia in the heart of the West’. This is mind-boggling. These papal pronouncements are not only unjust, but perverse and misleading: who rescues waves of these refugees and helps them? Europeans. Who are the greedy smugglers who throw them onto makeshift boats? Their fellow Africans and Arabs. The Pope’s words are shameful.

What is the Pope’s Ideology?

Pope Francis joins the ‘without borders’ cosmopolitan ideology present among the South American clergy, who since he 1960s have been influenced by Trotskyism. It is the doctrine of ‘liberation theology’. He later stated, and agreed with, this stupid formula: ‘Barriers create divisions, and sooner or later, conflicts’. Reality is exactly the opposite: it is mixtures of populations that generate conflict. Sealed borders and ethnic homogeneity guarantee peace. Similarly, in economics, Pope Francis has developed stale Marxist ideas which first appeared in the Catholic circles of the extreme Left of the ’60s. ‘Catholeftism’ is still very active in politics, trade unions, the media and also among the clergy. Today’s ‘catholeftism’ is also Islamophilic. For the first time, a Pope belongs to this thought current… It’s all there, everything fits.

For example, good Jesuit Pope Francis manoeuvers to make overtures to the traditionalists while accepting communion for the divorced and remarried. This wide of a gap doesn’t bother this schemer, even while he is risking a very serious schismatic crisis within the Church.

With an eager media behind him and a cynicism close to that of the Florentine Popes of the sixteenth century, this great communicator poses as a saint and seduces the naive. In taking his name from Saint Francis of Assisi, he adopts a phony, simulated poverty by refusing to live in the papal apartments. This facade of humility sounds bad coming from such a preachy and overbearing moral professor. Also, note his excessively infantile and provocative side, which can be seen in many of his statements and actions. This is a fanatical temptation. First it surprised, then excited journalists. But after a while, we finally came to realise that his speeches are poor and repetitive.

Theologically, Pope Francis belongs to the ‘politicised’ Jesuit school and desecrates the Catholic religion. Catholic universalism, which is only valid on the spiritual level (all humans are the sons of the same God, and eligible for the same sacraments), is transformed into a cosmopolitan material policy including the abolition of borders, open migration, and the mixing of peoples. This cosmopolitanism is biased. It is directed exclusively, in a suicidal manner, against the European civilisation and ethnicity. This all poses a very serious problem and can cause a schism in Catholicism.

This article was posted in French on 22 April 2016 on Guillaume Faye’s blog, J’ai tout compris. It was translated by Hannibal Bateman, the managing editor of Radix.

Guillaume Faye and the Future of Europe

This is an effort to get Guillaume Faye’s three latest titles translated and published as soon as possible.

Since its inception, Arktos has acquired the English-language rights to all of Guillaume Faye’s works that were written over the past 20 years. So far we’ve published four of them, and we have a fifth – The Colonisation of Europe – on its way later this month. Recently, we also purchased the rights to his most recent titles. We are now launching a Kickstarter campaign in an effort to get these translated and published within 2016.