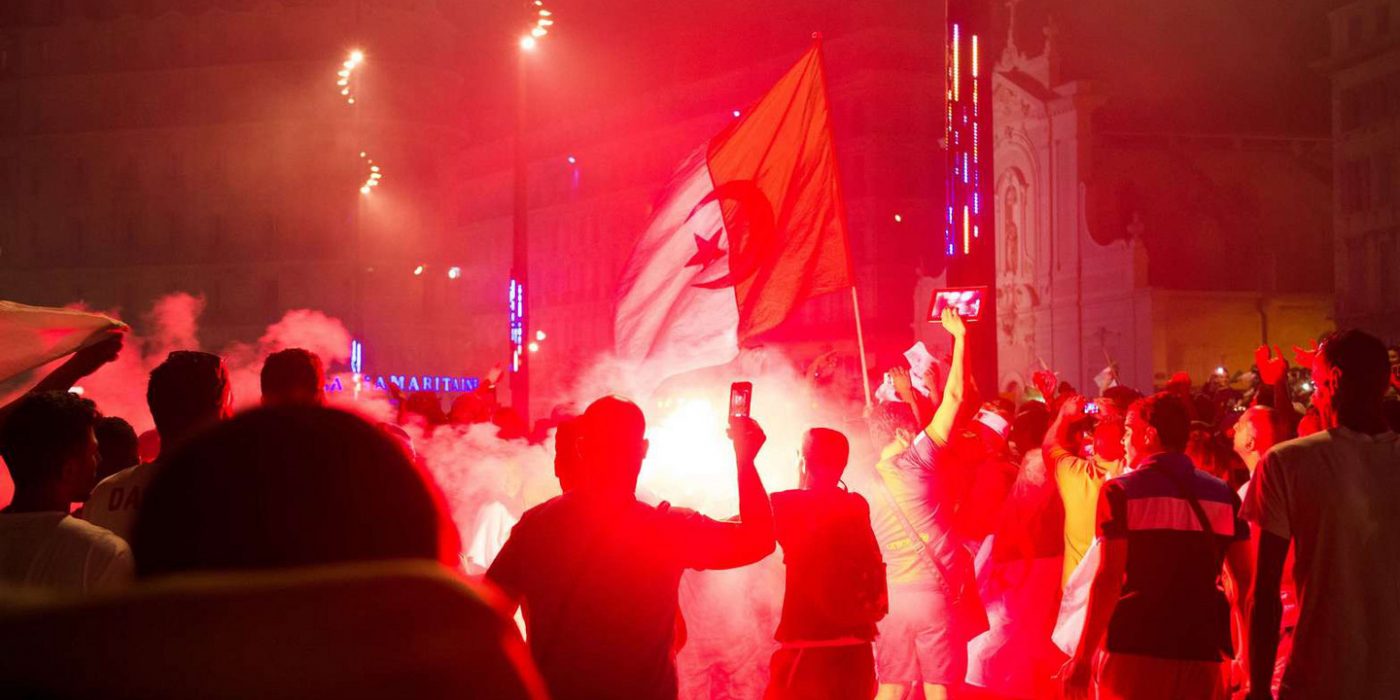 Preparing for the Reconquista

The invasion of Europe by mass immigration cannot continue. Guillaume Faye explains why not just resistance, but a reconquista is inevitable.

The following is the Introduction to Guillaume Faye’s The Colonisation of Europe, which was recently published by Arktos.

Uncontrolled immigration? Overwhelming numbers of foreign workers? Tumultuous birth rates and a ‘nice’ multiracial society in a cosmopolitan and peaceful ‘global village’ that stretches to every corner of the world? No way. These are pipe dreams, intellectual musings lacking historical culture, memory, or realism, and without any prescience. A settlement activity and the ultimate occupation strategy of Western Europe conducted by the mostly Muslim masses of the South and the East: that is what we are experiencing. And these events will not unfold peacefully.

[…] [W]hat is happening in the street reveals to us what others are attempting to conceal. The invasion is accomplished through childbirth as well as through our open borders. Moreover, both the mellow Right-wing parties and the insane Left are becoming less and less inclined toward statements of ‘fantasy’ when confronted with reality. Instead, they minimise, they interpret, and they reassure, like a bad doctor who tells a cancer patient that he is suffering from a common cold which will soon pass, when it is in fact these tall tales that won’t last long.

Regardless of whether they are politically oriented Right or Left, or whether they have integrationist or communitarian tendencies, experts and ideologists strive to reassure us by claiming that ‘everything will be fine, and we will not be overwhelmed’, or by praising ‘our relaxed multiethnic society’. Their blindness is complete. The current and relentless demographic logic quickly fulfils its mathematical task, as does the will to conquer us, a will often acknowledged by its authors but ignored by public opinion.

In a strategic fashion, many Arab and Muslim leaders, be it those who are based in Europe or those abroad, desire and plan the irreversible colonisation and the definitive occupation of our nations. Some even speak of a ‘holy war’ (jihad) in Europe. It’s a form of revenge, a response to the Crusades and European colonialism. However, this also hints at Islam’s new will to power, combined with implicit ethnic resentment. Other Southern and Eastern peoples are also rushing in to take advantage of the breach. Their watchword? Europe is ripe for the taking!

In fact, Europe has been emasculated, celebrating its Gay Pride and the triumphant ascendance of homophilia. It celebrates its staggeringly low birth rates, its unbridled individualism, and the miscegenation of its women, as well as its ethnomasochism. It offers shelter, protection, benefits, and care to false refugees, while leaving its homeless citizens to starve. It declares the expulsion of illegal invaders ‘inhumane’ and practices a preference for foreigners. Its political classes and xenophilic bourgeoisie have longed to make Europe resemble those ageing women who pay gigolos to move into their homes.

Every occupation has its collaborators: the politicians and the intellectual media class make up the backbone of the pro-immigration party, the party that participates in our colonisation through collaboration; they are well supported by the Catholic, Jewish, and Protestant religious hierarchies, none of whom suspect how much they are at risk of being devoured whole. The peoples of Europe have never been consulted, especially the working classes who bear the brunt of the shock resulting from colonial immigration. Soon it will be too late. The point of no return will be reached, and votes and elections will be ineffective. There will only be two options: our historic disappearance, or a reconquista. I will soon get to that.

The mass immigration of various peoples from the South, as well as that of the Muslims, are the gravest challenge that Europe has faced since the fall of the Roman Empire. The European anthropological base is threatened and, consequently, so is our entire civilisation: we are looking at the prospect of an occupied land and a people whose generations are no longer being renewed, and which is replaced on its own soil by the rejects of other nations. It is all but a banal historical drama to which the Pharaonic Empire, the Native Americans, and many others have fallen prey. Cultural Americanisation is indeed detestable, but one can always get rid of McDonald’s more readily than a mosque, or abolish jeans with greater ease than a chador…

Tragedies are rarely peaceful, and colonisation never occurs without clashes. We are living in a France that stands at the doorstep of an ethnic civil war. Mass immigration is not only economically disastrous (costing us approximately 800 billion per year and ruining more than just the public schools) but has caused an explosion of what is improperly termed ‘delinquency’. Why? Because the burning suburbs; the riots; the increasing misdemeanours of African and Maghrebian groups; the multiplying areas of lawlessness; the raids that nowadays extend into town centres, the countryside, roads, and trains; as well as the eviction of Europeans from ‘cities’: all of this does not merely follow the patterns of crime, but bears the characteristics of territorial conquest. The latter complements demographic submersion. Of course, Islam is now actively behind this. As for the over-criminality of the ‘Brown-Blacks’, in no way is it the result of economic desperation or poverty, or of an alleged racist ‘social exclusion’, nor is it even an insurrection akin to that of the proletarians of yesteryear. What it is, in fact, is a desire for conquest and for the humiliation of Europeans on the basis of resentment. In addition to the crimes of theft or looting, and the growth of a parallel, criminal, and parasitic economy, we now witness a willingness for rebellious provocation… Just listen to the words of rappers IAM and NTM in ‘Affirmative Action’… Believe me, we have not seen anything yet. The designation of state symbols as targets (the fire department, the police, postal workers, train engineers, etc.) is incontestable evidence of this, together with the rapid growth of Islamic institutions controlled by Arab countries in every city of France. The process of depriving Europe of its sovereignty internally, and then externally, has already begun. Check your history books for confirmation.

As for those who gullibly praise the ‘American multiracial model’, they simply do not understand the inner nature of the United States due to not having lived there, as I myself have. The USA is a financial company with a policing aspect, a profoundly multiracial, ‘nationless non-land’, a gigantic human kaleidoscope spread over a vast area, and it has managed the migration of heterogeneous populations with the greatest of skill. The countries of Europe, on the other hand, consist of single nations within a very narrow territorial frame, and can therefore not withstand ethnic chaos without succumbing to civil war.

The dreams of futurists are bound to go up in smoke. The future lies in our return to ancestral behaviour and in our ability to amplify it, using civilisations as ethnic blocs. The paradigm of universal miscegenation, and of the ‘world citizen’, will never see the light of day. And in spite, or perhaps because of technoscience, the future will be more archaic, meaning more ethologically human than has been the case in the recent past. Owing to the increasing population density all around the world, it will be dominated by international conflicts for the control of land, seas, and scarce resources. Peninsular Europe is the first area to be coveted both economically and strategically – not by Russia, but by the United States, and from the South, by those who rank themselves under the banner of Islam.

The ethnic war whose beginnings we are now witnessing therefore bears no relevance to sociology or criminology, but is geopolitical and geo-ethnic. As far as wars are concerned, history always proclaims one camp to be the victor and another as the vanquished. The loser is usually the one who rejects confrontation and denies aggression, mistaking his enemy for a friend. Tomorrow, if a hundred cities are simultaneously set ablaze, all police forces will be helpless. The figures testify to this… Tomorrow, contrary to the silly calculations of the socialists or the Greens, young immigrants will not vote for these two parties, but for the ones that they will elect from their own camp. They will elect Muslims, who will first demand privileges and then power. This is the inexorable logic of any and all colonisation stemming from below.

I may very well shock you, just like a doctor who prescribes surgery as his patient’s last resort, but I think an open outbreak of ethnic civil war may be necessary. When a situation becomes intolerable and inextricable, only a catastrophe, in line with the mathematical theory of the same name, could plunge a system into chaos so that a new order could arise. Will our European youths become aware of this and defend themselves, spurred by memory and will? Maybe, maybe not…

If they do, it is not the rule of law or its police forces that will put up a fight, but the people themselves, our people. It will no longer be a ‘civil war’ as understood in its fratricidal, classical meaning, but rather a war of liberation. Historically speaking, this would be ironic, as France would then experience a similar situation to the one in Algeria in 1960…

But one must not deny the enemy his nobility or the human righteousness of his cause, as he takes over the territory you abandon. He preserves his own blood and soil, expanding his ground at the expense of yours and replacing your blood with his. The enemy plays his game well and is to be esteemed. Only the collaborators, in other words the traitors, should not. Every nation invaded in its own lands has always followed this motto: from resistance to reconquest. The concept of ‘return aid’, a brilliant invention by armchair economist Raymond Barre, has never really produced any historic effects… Will our reconquista be a Spanish symphony?