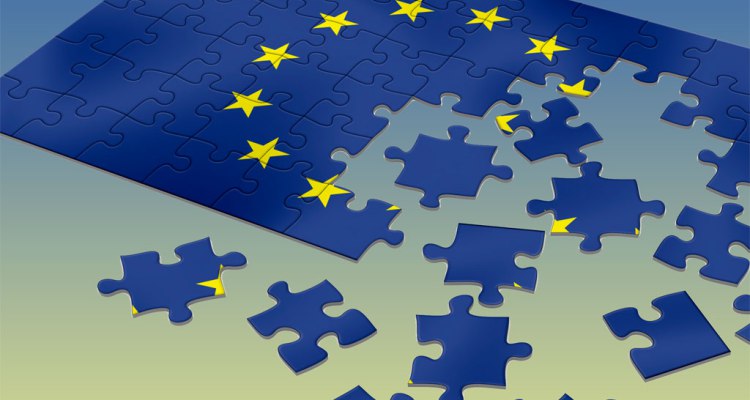 The Problem with the EU is that it has Discredited Europe

Interview with Alain de Benoist: ‘The more that the policies which the European Commission implements fail, the more it obstinately perseveres in the same manner, convinced that everything will collapse if we interrupt its headlong rush. So we will not escape this headlong rush. Nor the collapse.’

Whether one is europhile or eurosceptic, one fact is obvious: Europe is doing worse than ever. Why?

There is mounting evidence indeed: the ongoing crisis of the euro; the ‘no’ of the Danish to the referendum of 3 December; migratory waves which are beyond control; social anger; farmers on the verge of revolt; the worsening of financial prospects; the explosion of public debts; and rising populisms and ‘conservative’ and eurosceptic movements. Add to these the possible secession of Great Britain, which would evidently create a precedent. Jean-Claude Juncker already confessed: the year 2016 may mark the ‘beginning of the end‘ of the European Union. ‘No one can say if the European Union will still exist in its present state in ten years’, Martin Schulz, President of the European Parliament, declared from his side. ‘We risk a dislocation’, added Michel Barnier. ‘Europe, it’s finished’, concluded Michel Rocard. This provides the tone. The European Union is falling apart under our eyes under the impact of events.

In the affair of the migrants, Pope Francis recently contrasted those who want to build walls and those who want to build bridges. He forgot that between bridges and walls, there are doors, which function as locks: we can, according to circumstances, open them or close them. The establishment of the Schengen zone was founded on the assumption that the European Union assures the control of its external borders. As it was incapable of doing this, Hungary, Poland, the Czech Republic, Denmark, Austria, Slovakia, Slovenia, Croatia, Serbia, Macedonia, and even Belgium, one after the other, recently reestablished control of their internal borders, or limited the entry of ‘refugees’ onto their soil in a drastic manner. This signifies that the Schengen zone is already dead. In only wanting to establish bridges, we have condemned ourselves, in the long term, to only building more walls.

The beginning of the 1990s saw the end of the tacit consensus of the citizens regarding the project of communitarian integration. Currently, only a third of Europeans say they trust European institutions, whether they are suffering in this crisis (such as in the countries of the south), or they fear being affected in turn (in the countries of the north). They expected independence, security, peace, and prosperity from Europe. They got vassalisation within NATO, war in the Balkans, de-industrialisation, an agricultural crisis, recession, and austerity. Hence the feeling of dispossession which touches all the peoples.

Souverainistes might be delighted at the current resurgence of nations, but would it not be the return of national selfishness?

The current return of borders is only a temporary retreat which does not correspond to the resurgence of the nation-state. All the centres of decisions for the European countries remain in the hands of international bodies, which is to say that their sovereignty (political, economic, military, financial, budgetary) is nothing more than a memory. Moreover, there is not a criticism they make about the European Union that couldn’t be said of nation-states as well. The democratic deficit of European institutions, for example, is only one example of the general crisis of representation that today affects all countries, likewise with a fundamental crisis of decision which we find on all levels.

The greatest criticism that we can make about the European Union is that it has discredited Europe. Europe today is, actually, everything but a federal Europe, and this is why it is incapable of uniting in the respect of a national ‘us’, that is to say the collective existences which exist within it. It never wanted to build itself as an autonomous power, but as a vast market, a space of free trade which was supposed to organise itself according to the exclusive principle of human rights, without collective attachment nor allegiance to a common thing. It was built, from the start, upon the foundation of the economy and commerce in place of politics and culture. The underlying idea was that, by a sort of ratchet effect, economic citizenship would inevitably lead to political citizenship. It’s the opposite which has happened.

In accordance with the diktats of liberal ‘no borderism’, Europe wanted to unify itself in a ‘universal’ perspective, referring to abstract notions without any cultural or historical anchorage which could give meaning for the peoples. Far from protecting Europeans from globalisation, the European Union thus became one its principal vectors. In place of seeking to make a common political will based on the consciousness of a unique destiny emerge, it chose to open itself to the world without realising that we cannot adapt to external circumstances without possessing an internal principle. Far from situating itself in the perspective of a multipolar world, it put itself in the service of a ‘religion of humanity’, thus prefiguring a cosmopolitan order founded on the universalisation of liberal democracy (an oxymoron whose exact meaning is the submission of democratic procedures to the system of the market).

The tragedy is that the more that the policies which the European Commission implements fail, the more it obstinately perseveres in the same manner, convinced that everything will collapse if we interrupt its headlong rush. So we will not escape this headlong rush. Nor the collapse.

This interview with Alain de Benoist was posted in French on 17 March 2016, on the Boulevard Voltaire Website. Nicolas Gauthier was the interviewer. It was translated by Eugene Montsalvat.