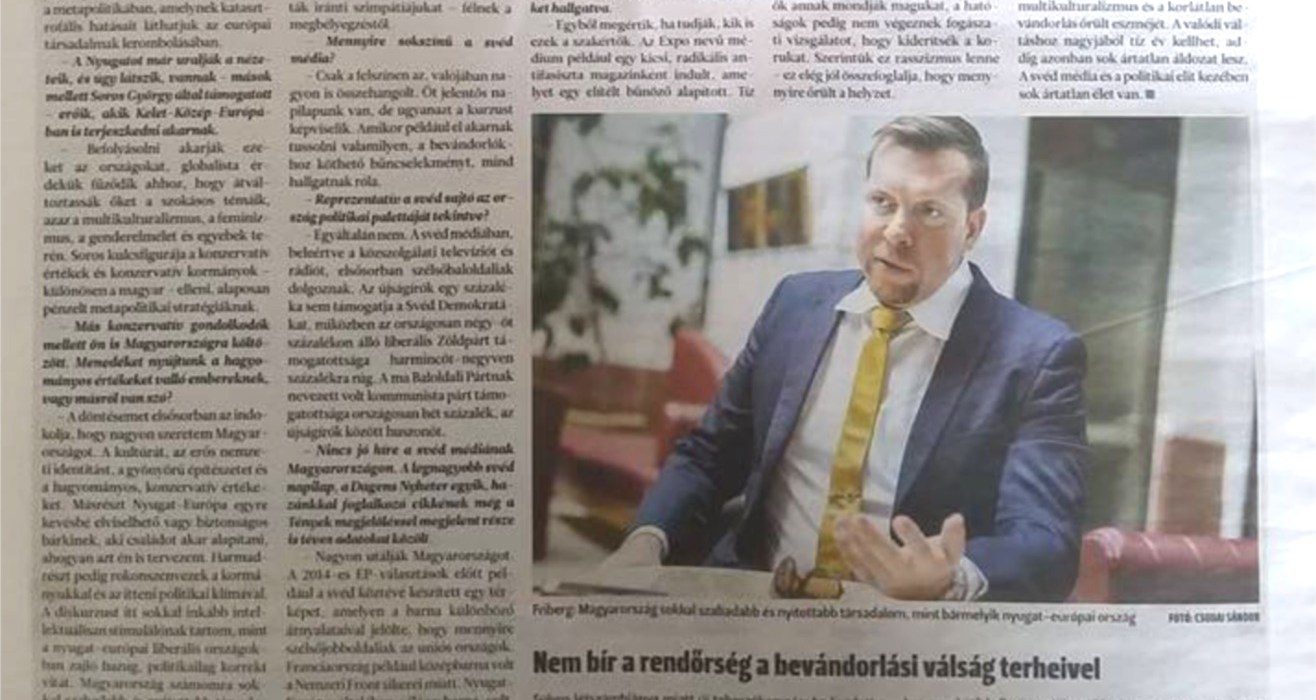 The Swedish press is dominated by extreme Leftists and liberals, so Hungarians shouldn’t be surprised by their insults, Daniel Friberg, a Swedish economist based in Hungary, explained to Magyar Hirlap.

The Hungarian daily newspaper Magyar Hirlap recently published an interview with me about Sweden, metapolitics, immigration, and political correctness. Below is the English version, which was taken from their online edition, together with a link to the original.

The interview in its entirety follows here:

“Soros is one of the key players when it comes to executing well-funded metapolitical strategies aimed at fighting conservative values and conservative governments.”

The Swedish press is dominated by extreme Leftists and liberals, so Hungarians shouldn’t be surprised by their insults, Daniel Friberg, a Swedish economist based in Hungary, explained to Magyar Hirlap. According to the founder of the Swedish metapolitical think tank Motpol and the Website RightOn.net, and co-founder of the publishing house Arktos Media, uncontrolled immigration and political correctness is driving Sweden towards a civil war.

A central topic of your book is metapolitics. What does it mean?

Metapolitics is political work carried out outside the parliament and the political process. Its goal is to shape opinions and influence the cultural and educational institutions of a society, rather than being involved in party politics. The media and entertainment industries also lie within this field of action. Liberals have been following a very well-planned strategy when it comes to metapolitics, and we can see its disastrous results today in the ongoing destruction of Europe’s societies.

Liberalism is already dominating the West, and it seems that there are forces, supported by George Soros among others, who want to export this to Central and Eastern Europe.

They definitely want to influence those countries. The globalists have an interest in transforming them using their usual tried-and-proven techniques, specifically by exporting multiculturalism, feminism, gender theory, and so on into them. Soros is one of the key players when it comes to executing well-funded metapolitical strategies aimed at fighting against conservative values and conservative governments, and Hungary in particular.

Like several other conservative thinkers in recent years, you have moved to Hungary. Are we an asylum for people with traditional values, or do you have other reasons for doing this?

My decision is based primarily on the fact that I really love Hungary, particularly its culture, strong national identity, beautiful architecture, and traditional conservative values. Secondly, Western Europe is becoming more and more unbearable and unsafe for anyone who wants to raise a family, which I intend to do. Thirdly, I sympathise with your government’s struggles and the political climate more generally, and find the level of the debate here much more intellectually stimulating than the dishonest, politically correct debate taking place in the liberal countries of Western Europe. For me, Hungary is much more of a free and open society than any country in the West – especially Sweden, which is the worst of them all.

The Swedish mainstream press is often lecturing Hungary regarding freedom of speech. Do they hold the moral high ground in order to do so legitimately?

In Sweden, the mainstream press is a very stigmatising force. Anyone who criticises Sweden’s immigration policy is attacked and defamed in a very immoral and unjust way. By publishing the photos, names, and addresses of such people, the press has frequently exposed such critics in a way which has made them a target for violence. I’m not only talking about political activists, but of ordinary Swedes who have done nothing more than written something critical of immigration in the comments sections on various Swedish Websites. They are trying to scare ordinary people in order to stop them from expressing their opinions. It’s a very fanatical form of ideological journalism, and it has nothing to do with free speech whatsoever. Every now and then they also launch campaigns calling for stricter laws to further limit any criticism of immigration policies. They label such opinions as “racism,” but this is a very flexible and slippery term for them. They are still calling the Sweden Democrats (SD) racist even though they are now the biggest party in Sweden, polling at around 25 percent support in recent surveys. Their actual level of support is even higher, as many Swedes oppose immigration but they won’t admit to supporting the SD in public because of the stigma that comes with it.

How pluralistic is the Swedish mainstream media scene?

The Swedish media is highly coordinated. It’s only pluralistic on the surface. We have five major newspapers, but they are all pushing the same agenda. For example, when they want to cover up some criminal incident which was perpetrated by immigrants, they remain unanimously silent, even when it means giving up on breaking a story that none of their competitors are reporting on.

Are they representing the entire political landscape of the country?

The Swedish media doesn’t have a good reputation in Hungary. For example, in an article by Dagens Nyheter about the Sweden Democratic Youth, which had an accompanying table about Hungary entitled “Facts,” was factually incorrect.

They really hate Hungary. For example, in the run-up to the European parliamentary elections in 2014, Swedish state television published a map of the EU which purported to show how much “Right-wing extremism” existed in each country according to shades of brown. France, for example, was medium brown because of the success of the Front National. In general, Western Europe was light brown, and Eastern Europe was coloured a bit darker, but Hungary was the only country which was depicted as being completely black. It is the land of pure evil, according to Swedish state television.

How do you think Hungary could fare better in the Swedish media?

The Swedish mainstream is very much controlled by radicals. They are like a religious sect. It’s almost impossible to change their opinions. I suggest you instead appeal to the rapidly growing Swedish alternative media scene, which is probably the biggest in Europe. For example, outlets like Fria Tider or Avpixlat are conservative-libertarian. They’d be considered mainstream anywhere outside of Sweden, but because of their conservative views, they are branded as “hate sites” by the Swedish mainstream media. Their very large readership, which currently comes to over a million unique readers every month, is very positive towards Hungary because of its conservative values and sane immigration policy. The old media is gradually collapsing in Sweden and their readership and viewership is rapidly declining anyway, so my advice is to just ignore them and let them die out in silence. They won’t be missed by anyone.

It’s not easy to remain calm about insults hurled by Swedish “experts” against Hungary.

It makes sense if you know who these experts are. Expo, for example, began as a small, radical anti-fascist magazine which was founded by a convicted criminal. Ten years ago, the state started funding them. They not only receive money but are practically part of the establishment’s media apparatus now. They are all over the mainstream and the state media whenever a “neutral expert” is needed to talk about anti-immigration parties or Hungary. The headquarters of Expo’s sister organization in Denmark was raided by the police and they were shut down because they were maintaining illegal databases of ordinary citizens’ political views, as well as their personal information. Expo in Sweden has the same databases, but the authorities choose to look the other way and thus tacitly give them permission to break Swedish law.

The political correctness of the Swedish police is infamous. How is it affecting crime rates in the country?

We currently have 55 no-go zones, all immigrant neighbourhoods where even paramedics and firefighters cannot go without police escort because of the danger of their being attacked. Obviously adult “migrant” men are registered as minors simply because they claim to be minors, and the authorities don’t attempt any verification such as through dental inspections. They think such things are racist. This pretty well sums up how crazy the situation is.

Does this apply to counter-terrorism efforts as well?

Absolutely. According to the Swedish state, if we are attacked, it’s always somehow our fault. We should really just be nicer and understand those who attack us. We have a lot of ISIS cells in Sweden, but our social system is so generous that they use Sweden mainly as a base for recuperation. Sweden is a terrorist paradise. Uncontrolled immigration will, however, eventually cause our welfare system to collapse, and when it happens, it won’t be long before we get the same treatment as Belgium.

Is there light at the end of the tunnel?

The climate in Sweden is heading towards a civil war. The police have lost control, and now vigilante groups have to patrol the streets in order to protect women, children, and the elderly from violent and sex crime. The Sweden Democrats are growing rapidly and the people are waking up. They are abandoning the crazy ideas of multiculturalism and unlimited mass immigration. It will be perhaps another ten years before we will see major changes, however, and until then there will be many more innocent victims. The Swedish media and political elite have the blood of a lot of innocent lives on their hands.