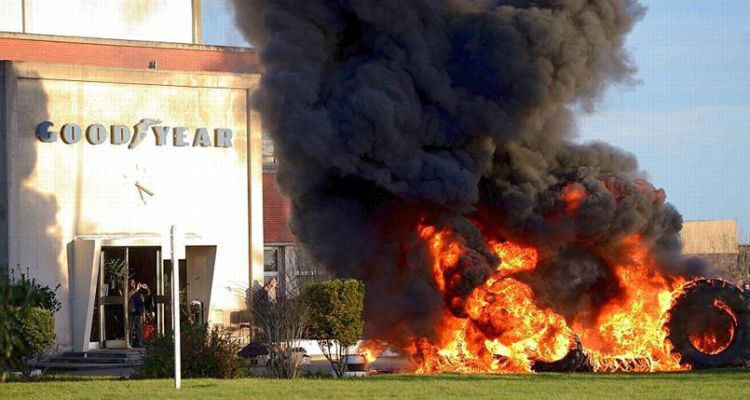 This Right that Doesn’t Care for its People

For many people on the Right, the meaning of social justice can easily fit on a piece of confetti. They want to defend the nation, but ultimately care very little for the people. They still do not understand that capitalism is intrinsically globalist, because it requires the abolition of borders.

François Hollande recently presented his ‘last chance plan’ to fight against unemployment. But in his time, François Mitterrand had already said that ‘we have tried everything’ in this domain. Is mass unemployment inevitable?

What François Hollande wants to lower, it’s not unemployment, but unemployment numbers. Hence his program of youth training, which aims above all to deflate the statistics. For the rest, supply-side policy clearly doesn’t work, and whereas, without public expense, France would have already fallen into a depression, all that he proposes  are habitual liberal recipes: supplementary gifts to businesses, reduction of public investment, diminution of social protection, unemployment allowances, and so on. As Dominique Jamet wrote, ‘Even in their wildest dreams, Pierre Gattaz and the Movement of the Enterprises of France (MEDEF), who have always demanded it, do not hope so.’

The government has never understood that businesses only hire when they are assured of being able to sell, and that they do not sell when the politics of austerity condemns buying power to diminishing or stagnating. ‘Work more to earn more’, Sarkozy already said, forgetting that if we work more, we increase the quantity of the labour supply at the same time. But, as in a period of unemployment, when demand is lower than supply and doesn’t increase, the only consequence is the collapse of wages. We recognise here the influence of Emmanuel Macron, who I consider to be the most harmful and dangerous minister in this government – ‘the political expression of bourgeois domination’, as Patrick Buisson said.

Yet Emmanuel Macron seems well regarded by a part of the Right.

For many people on the Right, the meaning of social justice can easily fit on a piece of confetti. They want to defend the nation, but ultimately care very little for the people. They still do not understand that capitalism is intrinsically globalist, because it requires the abolition of borders (‘laissez faire, laisser passer!’). By reason of its propensity for boundlessness, it cannot exist without constantly revolutionising social relations, or seeing national identities as so many obstacles to the expansion of the globalised market. The anthropological model that it bears, which is that of an individual who is always seeking the maximisation of his own self-interest, is as much at work in economic liberalism as it is in societal liberalism (Translator’s note: societal liberalism refers to things such as gay marriage, the legalisation of drugs, and social permissiveness in general), and the axioms of interest and the machinery of profit are pillars of the dictatorship of mercantile values.

At a moment when the Front National (FN) vote increasingly translates into ‘a true class conflict’, as Christophe Guilluy said – for whom ‘it’s by working on the social question that we arrive at the identitarian question’ – and at a moment when the majority of the popular classes no longer live where wealth and jobs are being created, something which has never happened before in history, of course it is these same people who find that the economic program of the FN is ‘too far Left,’ or who are enthusiastic for this pathetic clown Donald Trump (the American equivalent of the Russian Zhirinovsky), who thinks that the fact of ‘knowing how to make money’ suffices to qualify him to lead the United States.

Since the 1990s, social despair has not stopped expanding: 6.5 million people are listed at the unemployment centres, and there are 8.5 million poor people living at 60% of the median income threshold, as well as 6 million subscribers to basic welfare benefits, 2.3 million RSA beneficiary households, 3.8 million inadequately housed, 3.9 million beneficiaries of food aid, and 810,000 homeless, 100,000 of whom are forced to sleep in cellars or in the street.

In the face of this turning point in the social history of our country, some people persist in seeing nothing. They understand that the peasants are increasing their illegal actions because the rural world is in the process of dying. They understand that the Corsicans are going to carry out their reprisals against the abuses of the riffraff who attacked firefighters, but when eight salaried employees of the Goodyear factory in Amiens are condemned to two years in prison, nine months of that without parole, for having held two executives of an enterprise that has cut 1,100 jobs and left 800 workers unemployed (resulting in twelve suicides since the closing) hostage for thirty hours – nine months in prison against thirty hours! – they do not hide their joy at seeing these ‘thugs’ sent to the ‘nick’. The Corsicans and Bonnets Rouges are alright, but not the workers! But they utter not a word, on the other hand, about the white-collar thugs who embrace relocation, and who continue developing ‘social plans’ which allow their shareholders to always hog even more. As for myself, who is indebted to the great tradition of revolutionary syndicalism (Georges Sorel and Édouard Berth, Émile Puget and Victor Griffuelhes, Arturo Labriola and Filippo Corridoni), this stirs my heart.

Certainly, one can surely favour a ‘Thatcherist Right’, like Éric Brunet of Valeurs actuelles, or like Guillaume Larrivé, the deputy of Yonne and a spokesman for the Republicans, for whom ‘marinisme‘ (Translator’s note: the movement supporting Marine Le Pen) is an ‘anti-national neo-Communism’. But that Right will be without me.

What do you think of this recent declaration by Jean-Luc Mélenchon: ‘We live in a period of social obscurantism. In this court of miracles that is the government, Mr Gattaz plays the chief of the capons, these beggars who in the past picked pockets in public places. He collects millions from the government, but it does not in any way reduce the number of the unemployed, and as soon as the coffers are full, he deepens his begging bowl. In France, the big bosses are a very parasitic assisted class.’

Parasites is absolutely the appropriate word.

This interview with Alain de Benoist was posted in French on 4 February 2016, on the Boulevard Voltaire Website. Nicolas Gauthier was the interviewer. It was translated by Eugene Montsalvat.