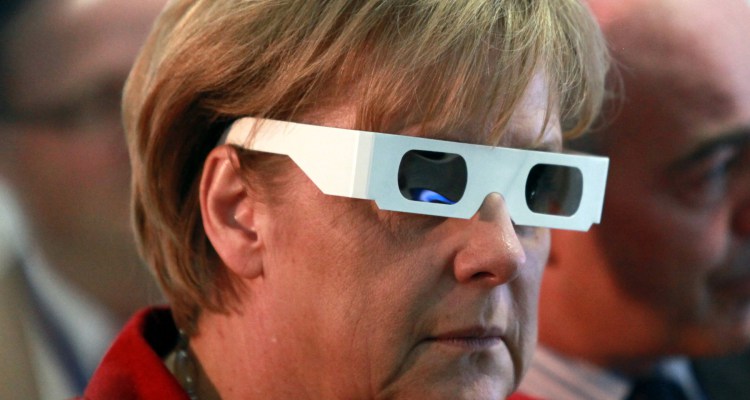 Angela Merkel is the image of Germany today: excessively moral, pudgy, and childless.

Merkel was elected ‘person of the year’ by Time magazine. But is she really? Is she an incarnation of Rhine capitalism, or of the old Pan-Germanic demons? Or is she just the Mrs Bogeyman of budgetary elegance?

Angela Merkel is the image of Germany today: excessively moral, pudgy, and childless. Having been elected Chancellor for about twelve years now, she has imposed herself with little noise, triumphing bit by bit over all scepticism, until she came to play a role of the first rank, as we saw in the Ukrainian affair, the Greek crisis, or more recently in the opening of the borders to migrants. She has imposed it in a peaceful fashion, becoming an exemplary figure of the Muttistaat, or the ‘maternal state’, which reassures the Germans (‘Keine Experimente!‘ as they said on the other side of the Rhine in the 1960s.) The unctuous hand, the pursed lips, the heavy eyelids: she perfectly embodies this woman without qualities, in the sense that Robert Musil gave this expression, who sometimes poses as the guardian of monetary orthodoxy and budgetary austerity, and sometimes as the vestal of humanitarian welcoming.

Unruffled, opaque, and stripped of affectation, this pastor’s daughter still pushes her country bit by bit towards the values of Protestantism. Germany, since the reunification, has a growing weight more than a genuine will. She assumes a leadership that she doesn’t really want – such that the Briton William Paterson called her ‘the reluctant hegemon’, unwilling hegemony.

With the affair of the migrants, is her popularity still falling?

It started because, after a phase of orchestrated euphoria, a part of her electorate began to seriously fear this influx of ‘refugees’: only 16% of Germans today regard the migrants as ‘opportunities’ for their country. It’s above all true that in the former German Democratic Republic, less marked than the länder of the West by the liberal and ‘Western’ ideology, but also in the ‘Free State of Bavaria’, which is today on the front line facing the flood of migrants and whose Interior Minister, Joachim Hoffman, just announced (in an interview with Welt am Sonntag that went totally unnoticed in the French press) that he will henceforth assume the control of its borders himself, rightfully making use of an essential aspect of the federal principle.

Angela Merkel remains at least at a level of popularity that would make the other heads of state or government envy her, starting with ours, because 60% of Germans think that no other political leader would manage the situation better than her. Moreover, no one seeks to replace her, including those who imprudently present themselves as her competitors, that is the Social Democrat Sigmar Gabriel, the Minister of Finance Wolfgang Schäuble, or the President of the Bavarian Christian Democrats, Horst Seehofer.

And the famous ‘Franco-German couple’, which has always been described as the motor of Europe, where is it?

The fruit of a marriage of convenience, the Franco-German couple rests on misunderstandings that nothing could overcome. The history and the political culture of the countries have been different since the treaty of Verdun in 843, and which divided the ancient Franks into two, into a Roman  and a Teutonic part. On one side there is a nation-state, where politics has always ordained spectacular initiatives taken by grand actors; on the other is a country of the imperial-federal tradition, where they have never understood the essence of politics very well (they advocated de-politicisation by law) and where they consider that, after the Jacobin parenthesis of the Third Reich, it is important above all else to guarantee the respect for norms in order to guard against all dramatic events. On one side we have functionaries and graduates of the École nationale d’administration; on the other, parlementarians and jurists. We are not astonished that the German mentality remains as incomprehensible to the French as the French political institutions are to the Germans!

Albeit neighbors, the French and the Germans know little about each other, and understand it poorly. As for the Franco-German friendship treaty that General De Gaulle initiated in 1963, his dispositions in favour of a better understanding between the two peoples remain dead letters. The rule, which is seen in France as a limit and a constraint, is perceived in Germany as a factor of order and freedom. A Frenchman is French thanks to the state; a German is German thanks to his culture. France privileges its internal market and its purchasing power, while Germany privileges its competitiveness and exports. The first has a president at its head, the second a parliament. In Europe, both have opposed ideas – one utilizes it as a lever to hide its weakness, the other as cover to hide its strength – which explains why souverainisme (referring to those ‘republican nationalists’ who are opposed to the European Union as well as any other form of pan-European organisation; they want to close the national borders and restore all the previous forms of European national sovereignty-Ed.) and populism have not had the success in Germany which they have in France.

In brief, divorce is not on the horizon, but the couple is still having problems: in the European train, the locomotive is out of order. What is necessary to remember is that the Franco-German disequilibrium doesn’t come about as a result of a Germany that is too strong, but from a France that is too weak. The new Germanophobia in the fashion of Mélenchon (French socialist politician-Ed.), that wants to see the reincarnation of Bismarck in Merkel, falls totally flat from this point of view.

This interview with Alain de Benoist was posted in French on 4 January 2016, on the Boulevard Voltaire Website. Nicolas Gauthier was the interviewer. It was translated by Eugene Montsalvat.