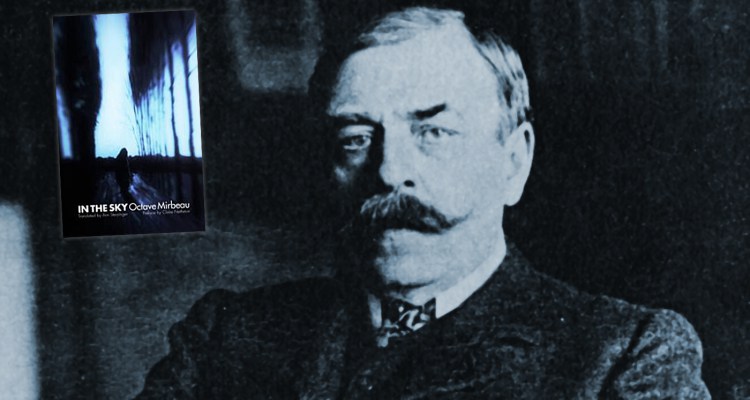 “In the Sky” is a gripping portrait of late-19th century loserdom, an omen of 20th century comic confessional writers such as Louis-Ferdinand Céline and Charles Bukowski. It also serves as an explanatory apéritif for Ann Sterzinger’s own novels.

The Célinean school of fiction – or as I call it, “loser lit” – is a genre that everyone loves to rip on and rip off at the same time. The bad doctor himself was scrubbed out of the history books after he sided with the Vichy regime during World War II, his numerous novels picked clean by halfwits who were too cowardly to name him as inspiration. Catch-22 is an unreadable knockoff of Journey to the End of the Night; On the Road is mechanistic sputum that desperately tries to imitate Céline’s elliptical storytelling style.

The best of Céline’s heirs are the ones who recognized why his novels were so enthralling: brutal, unflinching honesty. The secret ingredient in “loser lit” is simple: dig out your most embarrassing moments and shove them front and center for a laugh. Don’t pretend to be a hero, because you aren’t one, and when you’re mocking the idiocy of the world around you, don’t forget to look in the mirror. Henry Chinaski drunkenly falling in love with whores, John Dolan tromping around San Francisco with pus oozing from his boots, Raphaël Tisserand chickening out of murdering a couple having sex on the beach: all of them draw from Céline’s “creative confessions.”

Octave Mirbeau’s In the Sky (Dans le ciel), which predates Céline’s first novel by four decades, serves as a forerunner of “loser lit” in many ways. The book’s central plot, about a painter driven mad by his inability to realize his artistic vision, doesn’t emerge until halfway through the book: the bulk of it is dedicated to its nameless protagonist, a hapless dweeb who lives in said painter’s shadow. First published in 1892, this translation by Right On Co-Editor Ann Sterzinger is the first time the book has been released in English.

In the Sky is a truly remarkable work, a tragicomic portrait of male loserdom and artistic struggle in nineteenth century France. Mirbeau’s novel also functions as an odd supplement to Sterzinger’s own oeuvre. While NVSQVAM (Nowhere) and The Talkative Corpse are steeped in the “loser lit” tradition of Céline, reading In the Sky actually helped me understand both novels a bit better. (Disclosure: Sterzinger and I are close friends and she’s also served as a sidekick on my podcast.)

The novel opens up with a frame story focusing on an unnamed narrator dealing with the death of his “friend” X. “Friend” is in quotes because the narrator treats X with cruelty and contempt, setting up the ouroboros of psychopathy that drives the book. After bragging about stealing X’s mistress and complaining about having to visit him at his run-down country retreat, X dies, leaving behind a manuscript whose plot comprises the remainder of the novel.

The first half of the book concerns X’s childhood and life up until he meets the painter Lucien. X stumbles through life like a Belle Époque Elliot Rodger, with a heaping helping of Ray Midge-esque impotence. Failing at school and at making a living, he lives with his smothering, bourgeois parents well into adulthood, spending his free time grousing about the idiocy of society. The only time he’s happy is when someone else is suffering, namely his infinitely more successful sisters:

And though I wept in a corner of the room where we had gathered in silence, I couldn’t stop myself from savoring, long with my tears, the bitter joy of witnessing my sisters’ disappointment. In their eyes I could see the death of their hopes, their suitors’ escape, and their fear of eternal virginity.

Mirbeau’s critique of the French bourgeoisie is more silly than scathing, on the same level as the goth kids from South Park whining about “conformists.” In the Sky‘s depiction of X’s home life is clearly intended as a middle finger to the normies, and as amusing as it is to read about the pratfalls of his status-seeking parents and undersexed spinster aunt, they’re undermined by the even more pathetic narrator detailing them.

What keeps In the Sky from descending to the level of a teenage diary is X himself. As loathsome as he can be, his gormlessness and narcissism make for fascinating reading, like watching a cockroach defecate in the sink. We’ve all known someone like X – socially crippled, resentful, entitled, and full of unwarranted self-importance, yet still weirdly endearing – and Mirbeau’s depiction of him is unrelentingly comic.

After his parents croak and his sisters fleece most of the inheritance, X repairs to Paris, attaching himself like a barnicle to the talented, tortured painter Lucien. Lucien is everything that X is not: immensely gifted, charming, and successful, he’s tormented by his struggle to translate the imagery in his head to the canvasses he paints on. Seeking inspiration, Lucien and X spend their free time boozing and sleeping around, but not even the prettiest whore’s ministrations can ameliorate their plight:

“And you’ll see! Paris will fall. When people have enough of coming in from their forests, their mountains, their plains, just to crack their heads on its stones, Paris will burn, I tell you! There’ll be nothing left of it but the stink. A great poet once said: ‘The spot where a theater used to be always smells like a rat that died under the floor…’ If you’re talking about a city, let’s say it smells like a bourgeois dead in his wine cellar. And that’ll be it. All right, little one, go to bed, kiss me, and I will see you later.”

After Lucien departs Paris in search of a way out of his conundrum, X reverts to his old self-pitying ways. Taking up with Julia, his landlord’s daughter, we get a glimpse of what autistic narcissists actually do when they get the women they crave. The Supreme Gentleman spends a couple of chapters praising Julia in sappy panegyrics, but after popping her cherry, he casts her aside like a used Kleenex:

As for Julia, she hid her head in her hands and blushed, and kept crying, saying over and over, “Oh, that was wicked! That was wicked! And now you won’t love me anymore… and now I’ll be all alone…”

Like all virginal dorks, X has a Madonna-whore complex; he’s incapable of reconciling his lofty conception of love with the reality of male-female relationships. Unable to indulge his nerdly sadism with Lucien or his family, he takes it out on the one person he has power over, crushing both of them in the process.

The final chapters of In the Sky pick up the pace, with Lucien returning to the story after stumbling on what he thinks is some genuine inspiration. I won’t spoil the ending other than to say that the character of Lucien is based on Vincent van Gogh (a personal friend of Mirbeau’s) and that Mirbeau leaves the question of artistic aspiration wisely – if painfully – unanswered. As Sterzinger herself has said, “to be human is to be trapped inside an idiot.”

As bleak as Mirbeau’s vision is, In the Sky is infused with one of the oft-forgotten ingredients endemic to the Célinean school: that tiny spark of hope. Part of the joy of reading tales of alienated losers struggling against a contemptuous world is the hope, however remote, that they succeed. Lucien and X each represent this longing for triumph, and despite Mirbeau’s pessimism, his inability to answer the very question he posed belies his motivations.

While I can’t directly compare Sterzinger’s translation with the original French, In the Sky‘s crisp prose is a world apart from the lurching, visceral writing that defines her novels. To the extent that parts of it read similarly to NVSQVAM (Nowhere) or The Talkative Corpse, it’s because Sterzinger is swagger-jacking Mirbeau in her own work; indeed, there’s more than a bit of X in Lester Reichartsen. Reviewers put off by her “unlikeable” protagonists should prop open a copy of In the Sky side-by-side to compare notes.

Ultimately, not even Mirbeau’s grade-school anarchist bellyaching can weigh down the masterpiece that is In the Sky. More conventional bookworms will enjoy its motif of artists struggling to reconcile their grand visions with reality; cynics will regard Octave Mirbeau as Ann Sterzinger for people who hate Ann Sterzinger. But the book’s real value is in the hilarity – and poignancy – of X’s story. Good, funny, confessional writing is as rare as common sense, and we need to scoop it up whenever it rears its pimply, meth mouth-afflicted face.