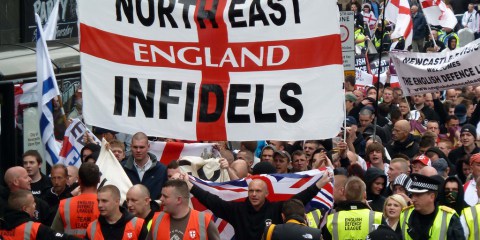 Islamophobes are the Useful Idiots of Radical Islam

In seeing the response to their attacks, the jihadists should have laughed well: a parade of sheep never impresses the wolves.

This interview with Alain de Benoist was posted in French on 18 January 2015, on the Boulevard Voltaire Website. Nicolas Gauthier was the interviewer. It was translated by Eugene Montsalvat.

About four million people marched after the attacks, for a journal that hardly sold 30,000 copies. That’s an event in itself. Was it a great moment of national communion or collective psychosis?

The demonstrations would have had some meaning if they were limited to expressing the rejection of terrorism by the French people in a solemn fashion. Organised by the government and the political parties, they were transformed into an immense wave of identification with the victims symbolised by the slogan ‘Je suis Charlie‘, promulgated in an Orwellian manner as the new word of ‘republican’ order. Since then, it is no longer used to condemn the attacks and the murders, but to identify with the ‘values’ of Charlie Hebdo, that is to say with the culture of blasphemy and derision.

During the demonstrations and the days that followed, in a France plunged into a state of thoughtlessness and petty moralising, we have seen it all. The bells of Notre Dame de Paris tolled for the priest-bashers. ‘National unity’ without the National Front. ‘Freedom of expression’ reduced to the right to blasphemy and the arrest of Dieudonné. It is that of caricaturists who are dependent on the right people (Muhammad sodomising a pig: how funny! Christiane Taubira as a monkey [Taubira is the current French Minister of Justice, and is Black-Ed.]: intolerable!). Battalions of the heads of state (two times the G20!) sang the praises of a title that they had never heard spoken of eight days earlier. Millions of zombies rushed to the kiosks to buy it, like the latest smartphone, a journal that they had never had the curiosity to open for eight years. The ‘Je suis Charlie‘ badge succeeded the AIDS ribbon and the little hand of ‘Don’t touch my buddy’ [a French anti-racist slogan-Ed.]. Surrealist spectacle! Everyone is nice, everyone is Charlie, in the great Western hospice transformed into a nursery. The editors of Charlie Hebdo, who didn’t want anything but ‘consensual’, would have been the first ones to be awestruck to see themselves thus canonised. As for the jihadists, they should have laughed well: a parade of sheep never impresses the wolves.

These corteges, could they be put on the same level as the Gaullist march on the Champs-Élysées in 1968, the marches against Jean-Marie Le Pen in 2002, or the surge of the Manif pour tous?

I don’t believe so. For Valls and Hollande, the demonstration had at least six objectives: to marginalize the National Front and neutralize the Union for a Popular Movement (which obviously fell into the trap headfirst) in the name of the ‘sacred union’; rally the French around a discredited political governing class; justify the engagement of France in a new Iraq war where it has no business; put in place a European police regime where we know in advance that it’s not solely the Islamists who will be monitored (Manuel Valls affirmed without laughing that the ‘exceptional measures’ he is ready to take will not be measures of the state of exception!); make believe that the terrorism that confronts us today has more to do with the Middle East than with immigration and the situation in the suburbs; and, ultimately, to persuade us that, ‘faced with terrorism’, France, the faithful vassal of the American caliphate, can only be the the ally of the Western countries that never cease to encourage Islamism, all by drowning their errors and their crimes behind the curtain of smoke of the ‘clash of civilisations’ (Putin was not invited, of course!). We are forced to recognise that these objectives have been achieved.

I am guilty, in a preceding interview, of speaking out of spontaneous reactions. That to which the journalists of Charlie Hebdo were entitled – but not the unfortunate French hostage Hervé Gourdel, who was decapitated in Algeria three months ago – have in reality taken the form of social and media injunctions, the grand postmodern fabric of affects and emotions. It would take an entire book to analyse in detail this masterstroke that permitted, in the space of a few hours, the recovery of popular anger for the benefit of a ‘republican’ adhesion to the dominant ideology of a ‘national union’, above all destined to redress the falling popularity of the head of state. The political governing class thus appears to be the principal beneficiary of the legitimate emotion aroused by the attacks.

We noted in these last days a recurrence of anti-Muslim attacks (attacks against mosques, etc.). Does this surprise you?

It particularly surprises me that the attacks are carried out for this reason: to stimulate an Islamophobia that the jihadists consider as a privileged ‘vector of radicalisation’. Islamist terrorists adore Islamophobes. They wish there were always more. They know that the more the Muslims feel rejected by non-Muslims, the more they can hope to persuade and radicalise them. The jihadists assure them that they represent the ‘true Islam’; the Islamophobes give them a rationale by saying there is no difference between Islam and Islamism. That the first commit the attacks while the second would rather take pleasure in seeing them multiply their pogroms against those who ‘reject the Western way of life’ (the nice, globalised way of life of submissive consumption) changes nothing. The Islamophobes are the useful idiots of radical Islamism. In the epoch of the Algerian War, that I knew, we didn’t complain that the Harkis [Algerian volunteers who fought in the French Army-Ed.] were Muslims, and we were not astonished that they had mosques in the French provinces of Alger, Oran, and Constantine. For my part, I will not give the Islamist terrorists the gift of becoming an Islamophobe. And I will not harbor phantasms of the ‘Muslim France’, as Drumont harboured phantasms of a Jewish France (1885), by mechanically associating Islam and terror like others once associated the Jews and money.