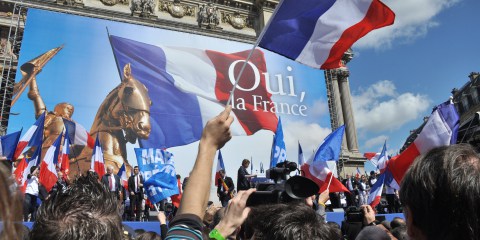 The Future of the National Front

The more the other parties put the French on guard against the National Front, the more they vote for them, which shows that the French increasingly believe nothing they say to them, as well as to how immense their anger and disgust have grown.

This interview with Alain de Benoist was posted in French on 15 December 2015, on the Boulevard Voltaire Website. Nicolas Gauthier was the interviewer. It was translated by Eugene Montsalvat.

The National Front (NF) certainly did not take any region, but that is not the important thing. The important thing is that it continues to progress in each election. The regionals were not an exception. The bar of 40% was broken, and the movement of Marine Le Pen was henceforth assured to have more than 350 regional councilors (which also incidentally resolved the problem of sponsorships for the presidential election). The essential fact is that a party that has both the Left and the Right against it, as well as all the big parties in government, all the big newspapers, all the radio and television states, and without forgetting the moralistic organisations, show business, the Representative Council of French Jewish Institutions, the Movement of the Enterprises of France (MEDEF, an employers’ federation-Ed.), and the Grand-Orient (the primary Masonic organisation-Ed.), Pierre Gattaz (the President of MEDEF-Ed.), Bernard-Henri Lévy, and Dany Boon (a comedian and filmmaker), is on its way toward gathering at least as many votes as the other two. In brief, the more they put the French on guard against the NF, the more they vote for them, which shows that the French increasingly believe nothing they say to them, as well as to how immense their anger and disgust have grown.

The NF answers a formidable demand for collective identity, political sovereignty, and security in social matters. Its two points of appeal are, on one hand, the youth, and on the other the popular classes, meaning members of the middle classes who are threatened with falling into a lower class or faced with stagnation across inter-generational social positions. The two springs of the NF vote are unemployment and problems resulting from immigration, which strikes first in the same milieu of peripheral France, in particular to the east of the Havre-Marseille line (to the east of this line lies the bulk of France’s heavy industry; to the west it is primarily agricultural-Ed.). On one side are those who profit from globalisation, on the other are those who are its victims. On one side France protects the globalised bourgeoisie and the petty bourgeoisie that depend on it, on the other is the fragile, precarious, and humiliated France, in a state of insecurity and relative pauperisation. On one side are the elites; on the other, the people.

This was seen well by Jacques Julliard, who wrote, ‘The vote of the National Front represents the ideal dream of the bipolar sociology of Marxism: the alliance of the proletariat and middle classes against the ruling classes. On the inverse, the “republican resistance”, as Jean-Christophe Cambadélis said, is constituted by middle- and upper-class cadres, the bosses, the bobos (bourgeois-bohemians-Tr.), the high intellectuals return to it… The NF vote is increasing in response to the contempt which today’s elite holds for the people, and this cleavage is a class cleavage.’

What is new is that the Left no longer hesitates to commit harakiri, by calling to vote for a party it still accused only a few weeks ago of wanting to imitate the NF on its ‘right’! That speaks volumes on its disarray, and that also shows that the prayer wheels have become powerless to stem the rising flood. The proponents of the anti-fascism of comfort and posturing (Robert Redeker), for whom the internal enemy is henceforth the little people, are stunned, because they state that all the anti-NF strategies used until now (demonisation, trivialisation, reclamation) are failures, and the excommunications mumbled by the devotees of the Eternal Return of the 1930s have ceased to be heard for a long time, that is when they do not simply make everyone burst out laughing.

It was therefore necessary to step it up. Where there is this surrealist spectacle, where we saw Manuel Valls abandon his role as Prime Minister to transform himself into the recruiting sergeant for Christian Estrosi (centre-Right politician-Ed.) (who Cambadélis [First Secretary of the Socialist Party-Ed.] had denounced two weeks earlier as ‘much worse than Marion’), the militants of Europe Ecology-The Greens distributing tracts in favour of Xavier Bertrand (centre-Right politician and former Minister of Labour), thus inviting the victims of austerity to vote for those who put it in place, and the directors of the ‘Socialist’ Party demanded that their adherents commit collective suicide by choosing to desert the regional councils of the old fiefdoms of Pierre Mauroy and Gaston Defferre (former socialist leaders-Ed.) for six years. Of course, the NF will be the clear proof that the Left and the Right of the government are definitively only two concurrent tendencies of the same party. The drag wind has not gone away. But the whole system finds itself being questioned.

Regarding these elections, the media invokes a ‘tripartism’, while Marine Le Pen speaks of a new ‘bipartism’, the patriotic NF against the globalist Union for a Popular Movement. Who is right?

The actual tripolarity (a preferable term to tripartism) can only be provisional. But the important thing, and we are coming to see it, is the postponement of the vote. The Right only took the North and the Provence-Alpes-Côte d’Azur region because it obtained the vote of the Left, and Marine Le Pen didn’t know how to prevent this postponement. Thus, the whole question is one of knowing if the NF is capable of checking this reflex by showing to a substantial number of the Left’s electorate that a vote in favour of the NF better represents their interests than a vote in favor of the Right.

The force of the NF holds from the fact that it is not situated in relation to the Left-Right cleavage – a cleavage by which the suicidal strategy of Manuel Valls shows that it is only the fulfillment of an illusion. If she reaches the second round of the presidential election, which is possible (but in no way certain), she will face it as an adversary of the Left and as an adversary of the Right. In the first case, it will be necessary to rally the electorate of the Right, in the second, the electorate of the Left. This implies different discourses. In any case, contrary to what happened in 2002, it will be a radical transformation of political life. The consequences of a final victory for Marine Le Pen are scarcely imaginable. If the Left wins, it is the dislocation of the Right; if the Right wins, it is the decomposition of the Left. That will be the opening of a new political cycle.