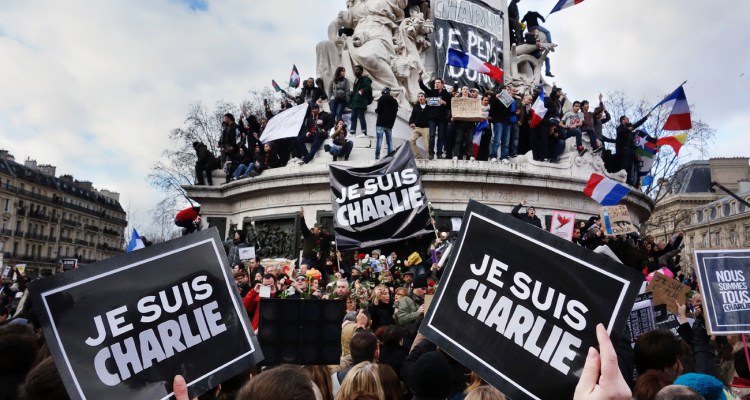 The ceremony at Les Invalides was a call to tears, not to battle. It is not with variety songs that we stimulate courage and will, or recreate the conditions for national fellowship.

This interview with Alain de Benoist was posted in French on 29 November 2015, on the Boulevard Voltaire Website. Nicolas Gauthier was the interviewer. It was translated by Eugene Montsalvat.

After the attacks committed in Paris last January, millions of people paraded in the large cities crying ‘Je suis Charlie’. In the days that followed the attack of 13 November, we have only seen a few sporadic rallies, to which was added the ‘national homage’ presided over by François Hollande in the Court of Honour of Les Invalides. Why this difference?

The attacks of January and those of November are very different. Last January, Islamist terrorists massacred journalists whom they had reproached for having ‘blasphemed’ against Muhammad, then they killed Jews for the sole reason that they were Jewish. It was then easy for the demonstrators, the vast majority of whom were neither Jews nor journalists, to speak of solidarity with ‘Charlie!’ On 13 November, on the contrary, the terrorists did not aim for particular targets. At the Bataclan, they did not demand that the spectators state their origin or religion. They massacred all those who were there without making distinctions regarding age, sex, beliefs, membership, or profession. We thus understood that everyone had become a potential target. This was the equivalent of a cold shower. Even if in these two cases the authors of the attacks were the same (young ‘radicalised’ delinquents), the meanings were equally different. The attack against Charlie Hebdo had a ‘religious’ nature; the one against the Bataclan had a political nature. On 13 November, the terrorists wanted to take action in response to our military engagement in Syria; they were aiming at French foreign policy. Hollande understood this well, insofar as he immediately ordered the French air force to intensify its strikes, while embarking upon a large diplomatic tour. As Dominique Jamet wrote, ‘We cannot make war far away and have peace at home.’ We make war on their homes, they make war on ours. It’s as simple as that.

Many of the victims’ families refused to participate in the ceremony at Les Invalides, because they considered the current government as having been primarily responsible for the attacks. Was this an exaggerated reaction?

Not really. The attack of 13 November took several hours, during which dozens of spectators at the Bataclan were shot like rabbits, before the men of the BRI (the Research and Intervention Brigades, or the French special police forces-Ed.) were even on their way. That already posed a problem. But it is above all the failures of the French intelligence system that should be pointed out. In terms of domestic security, the ‘territorial’ intelligence (the receiving and analysing of the relevant data) is the most vital. The Vigipirate (the French terror alert system, which sometimes deploys soldiers in France-Ed.) or Sentinelle (the name for the deployment of the French Army within France itself following the January 2015 terrorist attacks-Ed.) operations, which patrol the streets with soldiers who have been reduced to the role of security guards, merely provided a visible presence with the solitary aim of reassuring the population without truly protecting it.

Last year, the General Directory of Internal Security (DGSI) succeeded the DCRI, which had been created in 2008 under President Nicolas Sarkozy, from the fusion of the Directory of Territorial Surveillance (DST) – serving a judicial and operational vocation above all – and General Intelligence (RG) – the information service which does not have any judicial role. This hybrid organism, which absorbed all of the faults of its two components, began to rapidly rack up failures and errors (see the Verchère-Urvoas report of 2013). Since it is better able to spy on journalists than fighting against jihadism, the DGSI had a lot of intelligence on thousands of dangerous individuals at its disposal, but, due to its lack of a serious criminological component, it struggled to find the means for identifying those who were actually ready to carry out attacks. In addition, it never understood that the terrorists of today are not like Bin Laden, but are rather young bandits from the ‘hoods’. The attacks of recent years are the result. In Tunisia, after the attack on the Prado Museum, all those responsible for intelligence were dismissed from their positions. We can only regret that the same didn’t happen in France.

The Islamic State does not hide its contempt for a Western civilisation that it holds to be ‘decadent and depraved’. What do you say?

That the West today is decadent is a fact – and it is equally a fact that the Western interventions in the Near East have only had the result of generalising civil war and chaos since 1990. But the worst response would be to glorify our defects. On the contrary, it is decadence that makes us incapable of truly facing jihadism, to a degree that is the prelude to dissolution. After the attacks in January, François Hollande exhorted us to get back to ‘consuming’. Lately, he called for ‘entertainment’ to continue. The ceremony at Les Invalides was a call to tears, not to battle. However, it is not with variety songs that we stimulate courage and will, or recreate the conditions for national fellowship. As Olivier Zajec wrote, ‘It is nations, and not consumption or morality, that give form and meaning to the world.’

War is a form of relationship with another that also implies a relation with oneself. This means that in order to ‘know what our interests are, we must first know who we are’ (Hubert Védrine). In The Need for Roots, Simone Weil stated that ‘uprooted beings only have two possible behaviours: they fall into an inertia of the soul nearly equivalent to death, or they throw themselves into an activity which tends to uproot even more, often by the most violent methods, for those who are not yet or only partially uprooted’. In the face of a universalism that is leading to uprooting, Europe has no other alternative than to affirm that which properly constitutes it.