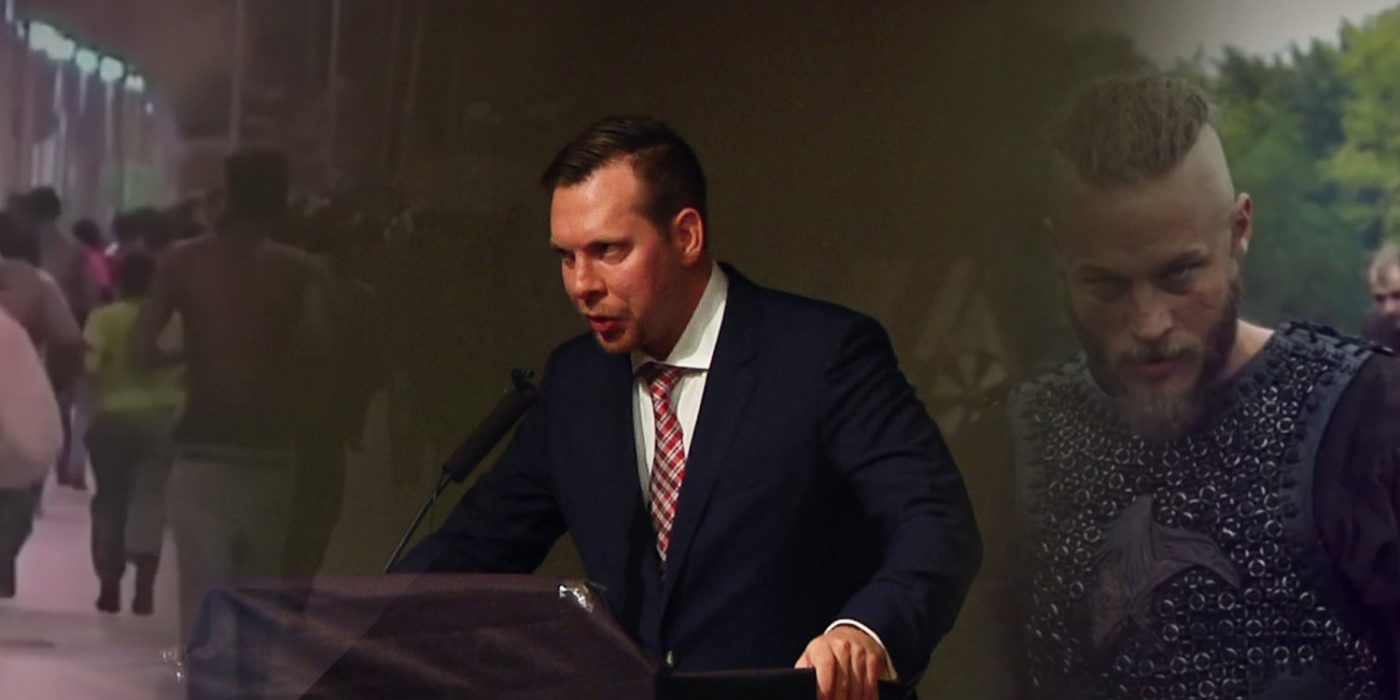 The Migrant Invasion: Victory or Valhalla

The situation is worse for Europe than ever before, but for that reason it is likewise better than ever for the opposition. The time has come for Spengler’s minority to assert itself. The conditions for it have never been better. Europe is awakening!

On October 12, the Swedish government organised a conference as a direct response to the news that Sweden would have to take in about 300,000 so-called ‘refugees’ of non-European descent.

The event had the character of a bizarre revival meeting, with a multicultural choir screaming ‘hallelujah’ before a cheering establishment. Everything was transmitted to the Swedish people through its mandatory tax-supported state television services in prime time.

One of the main speakers at this ‘revival meeting’ for more immigration was Ingrid Lomfors, who was educated at the Hebrew University of Jerusalem and is also the Secretary General of the Jewish Community in Stockholm. Lomfors is also senior curator at the State’s ministry of thought, the ‘Living History Forum’, whose task is to arouse feelings of guilt among the Swedish people for historical events we had little or nothing to do with. These misguided feelings of guilt are then supposed to pressure us into accepting an even more misguided, irresponsible, and insane immigration policy.

Ingrid Lomfors had three main points in her speech. All are problematic in more ways than one. Let’s start by looking at a short section of her speech.

No matter what one thinks of her claims, all of them are of course irrelevant to the question of how we should deal with today’s immigration.

The first two points could perhaps be described, if we are being kind, as half-truths, and the third point is an outright lie.

Under normal circumstances, one should not even endeavour to respond to such historical revisionism from the Left – which also applies to Lomfors’ claims. As I write in my newly-released book, The Real Right Returns: ‘Free yourself from the false worldview of the Left. Do not even consider it as anything other than a product of insane people who want to hurt you.’

However, I shall make an exception in this case, primarily for entertainment value.

The first point, that ‘immigration is not something new’, is first and foremost completely unimportant – a migraine is not new either, which does not mean that hundreds of thousands of cases of migraine in Sweden today are something desirable. Moreover, the sort of mass immigration we see today is indeed very much something new – it’s a phenomenon without precedent in Swedish history.

The second point is irrelevant, since all humans on Earth can be said to be a ‘product of immigration’ if you go far enough back in time. It does not mean that entire peoples have not been oppressed, murdered, and been rendered extinct in the wake of invasions, colonisations, and other forms of migration.

The third point, that there is no indigenous Swedish culture, is an outright lie. Obviously there is a distinctive Swedish culture, and the fact that we have been influenced by outside sources throughout history does not change this fact.

In the same way that an individual does not cease to be a distinctive individual just because he has been influenced by other individuals to some extent, Swedish culture does not cease to be Swedish just because Charles XII imported the cabbage roll from Turkey. This is something that no one throughout Sweden’s history has had difficulty understanding, before people like Lomfors began to embarrass themselves as well as all who take them seriously with this kind of utter nonsense.

But enough about Ingrid Lomfors’ uninformed and audacious lies. It is no exaggeration to state that the conclusion of her fanciful and unoriginal exposition is that we should accept today’s extreme mass immigration as something natural, and just sit back and accept what is happening without resistance.

Well. Lomfors says that ‘we are all immigrants’.

Yes, we are all immigrants. Every person on Earth has immigrant ancestors if you go far enough back in time. And who will immigrate to Sweden and Europe in the future is entirely up to us Swedes and Europeans to decide.

So what sort of people are presently coming to our continent?

This is what immigration can look like. Although our people have also been immigrants recently, in fact only a few generations ago. Let’s have a look at them as well.

Just like the ‘settlers’ in the first film, the Swedish and other European settlers in America were not alone on their new continent, but they were the strongest, and we know what happened then. The question is who will be the strongest in Europe today: today’s non-European ‘settlers’, or us.

I intend to ensure that we will be the strongest!

So how do we make sure that we are the ones who will prevail?

Europe is currently facing its biggest challenge ever, in the form of a ‘convergence of catastrophes’, to quote my favourite author Guillaume Faye, who will also be the next speaker. This convergence is an impending financial crash, combined with an invasion and colonisation of this continent carried out by non-Europeans in numbers that have never been seen before.

In spite of this crisis that we face, the battle for Europe is far from over. In fact, it has barely begun. And we are gaining ground while our enemies are losing it. Indeed, they are now about to lose traction completely in relation to public opinion. This opens up a historic opportunity for us which we cannot afford to miss.

As Oswald Spengler pointed out, it is only a few who change the course of history. Small organised groups throughout history have often succeeded in influencing the development of society by implementing strategies adapted to their particular situations. Or as the ridiculously corrupt Mikhail Khodorkovsky, who is one of Vladimir Putin’s Western-funded challengers ahead of the Russian presidential elections next year, puts it: ‘A minority is influential when it is organised.’

All of you in this room are part of such an organised minority, and all of you have an opportunity to influence the development of society, and in so doing ultimately contribute to the rebirth of Europe.

Instead of getting depressed about the present condition of modern society, view this as an opportunity for a fantastic adventure: an adventure where your personal efforts can make a mark in history.

In Sweden, we currently have a government that is very likely the most incompetent one in all of European history. Journalists have regressed into childhood. The Left has only just now begun to understand that the remains of their beloved kindergarten socialist society are crumbling under their feet, and they cope with it by screaming about racism.

People who are supposed to be adult claim that politics is about fighting over wages and dressing like the opposite sex, and whine about ‘discrimination’ against minorities. This comes at a time when our country and our continent are literally being colonised.

At the same time, public opinion is shifting, and the population is becoming increasingly less inclined to swallow the porridge of sentimentalism, utopian fantasies, and outright lies that the Swedish media and politicians are trying to push down their throats.

The situation is worse for Sweden and Europe than ever before, but for that reason it is likewise better than ever for the opposition. The time has come for Spengler’s minority to assert itself. The conditions for it have never been better. Europe is awakening!

The only question is: will we succeed?

We have done it before!

And it is only we ourselves who can hold us back from doing it again.

It is your choice whether you want to follow Ragnar Lodbrok or Gustav Fridolin.

I have made my choice.

Start cooling my mead in Valhalla!