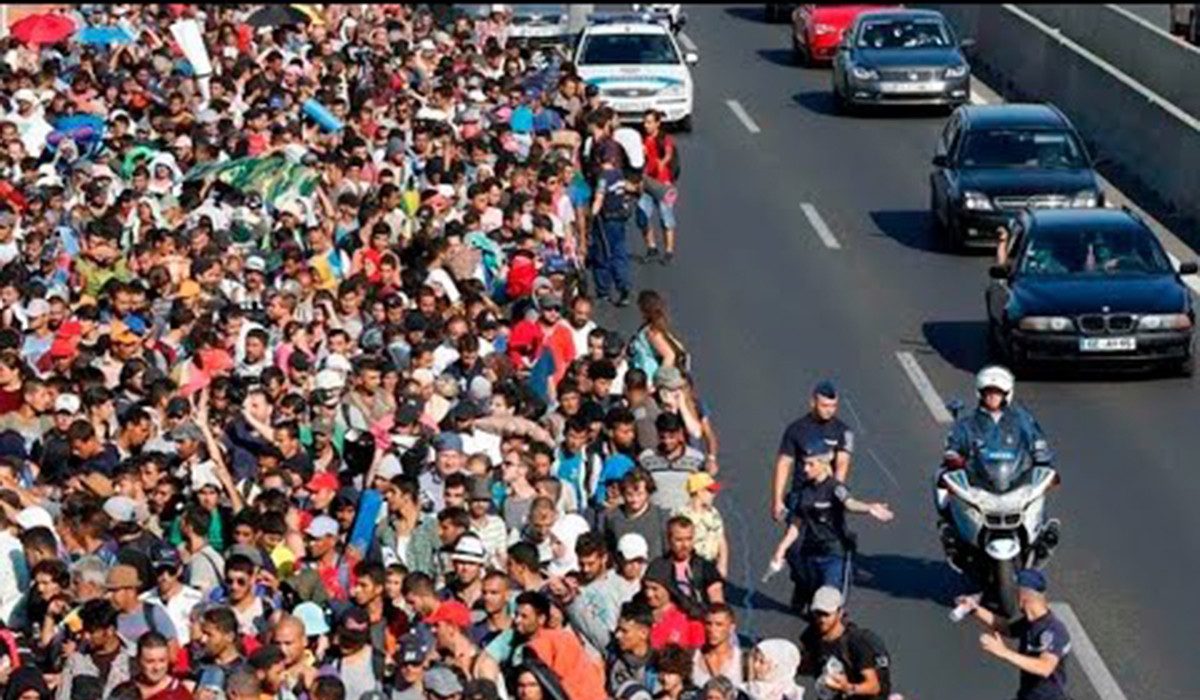 Rather than ‘immigration’, we should be speaking of the massive colonisation by settlement by peoples from Africa, the Maghreb and Asia, and understand that Islam is aiming at the conquest of France and Europe; that ‘juvenile delinquency’ is only the beginning of an ethnic civil war; that we have been invaded through births as much as through porous frontiers; and that, for demographic reasons, an Islamic power may install itself in France, first at the municipal level and then, perhaps, on the national level.

The public school system is sinking, a prey to violence, especially from ‘Beurs’ and ‘Blacks’, the new conquerors. There are more than a thousand zones where the police dare not go. For some years, the number of new immigrants has been exploding, whether they are legal and possess a visa or else are clandestine. The new arrivals are no longer profitable workers, but applicants for public assistance. We are racing to the abyss. If nothing changes, in two generations, France will no longer have a European majority for the first time in its history. Germany, Italy, Spain, Belgium and Holland are following the same gloomy path, though some years behind. Since the fall of the Roman Empire, Europe has never known a similar historic disaster. This is happening with the complicity of a blind and ethnically masochistic political class and the collaboration of the pro-immigration lobbyists.

The ethnic chaos that is getting worse in Europe may abolish our civilisation. It is an event more serious than all the great plagues and wars that Europe has known. Let us not forget that this colonisation as well as this Islamicisation serves the interests of the United States and that integration and assimilation, like multi-ethnic communitarianism, are impossible!

This colonisation for permanent settlement is sinking its roots into the very heart of our own way of thinking. It is the French who will have been the artisans of the destruction of France through invasion by foreigners. If France has been the most affected country, it is because the very notion of ethnic and cultural identity has been rejected in France.

The illness began long ago. Since the French Revolution, the new Jacobin France has thought of itself as ‘the republic of humanity’, ‘the fatherland of all men’, in imitation of the United States of America that had just acquired its independence. Only in the United States, a country whose very foundation is immigration and the ethnocide of the indigenous Indians, is this formula true, while in France, a land of rooted peoples and ethnicities, this formula is dangerously false. From the time of its origin the French Republic was founded on the dogma of a preference for the man without a country.

By a fantastic historical boomerang effect, the republican ideology, which is opposed to the idea of an ethnic identity, and after having tried to destroy the personality of the regions of France, has failed utterly to integrate, assimilate and brew into a melting pot the identities of millions of immigrants, or let us say rather new settlers, who have conserved their ethnic and cultural identity while the mass of the native-born French has lost theirs. The French ideology is on track to destroy France.

This ideology, based on an incorrigible cosmopolitanism, is anchored deep and integrated in the mentality of the ruling bourgeoisie. This is the source of the almost unanimous vote in favour of the ‘anti-racist’ Pleven and Gayssot laws that instituted a thought police, the source of the countless pro-immigration measures and renouncing of all border control on the part of governments of the Left and Right. In general the French bourgeois elites, in politics and the media, have no consciousness of ethnic identity.

These elites are complicit in colonisation and invasion by the antiracist criminalisation of opinion and an almost religious ideological faith that ‘ethnic identity is evil’, just like all political doctrines tainted by ethnic consciousness. This drive against ethnic identity and obsession with finding racism everywhere — which should really be called ‘xenophilia’ — that is, a fascination with the other, the foreigner — rather than ‘anti-racism’, touches the very heart of the political and cultural movements that appeal to French and European identity, but demonise ethnocentrism. This is how deeply the evil, the virus is anchored in the organism.

The solution to this problem is mathematical. We must change the referential. The ‘point of no return’ in system A has been reached. Moving to system B will allow the discovery of an acceptable solution.

In mathematics, leaving one set (as in physics, by the way) means entering another, where the algebraic parameters are no longer all the same. In this new set, the equations can finally be solved.

The question of immigration can therefore find its solution only in the framework of a new normative system, in which incomprehensible equations will become comprehensible and where what was not envisaged will be. What, however, will be able to make us change the reference system, to move from system A to system B? Catastrophe theory gives us the answer: a violent change of situation, a ‘tipping over’ into chaos, starting from which a ‘new system’ (system B), formerly unthinkable, will, however, become real. And the unsolvable equation will be solved.

(Excerpted from Guillaume Faye, Convergence of Catastrophes, available in the Arktos Webshop.)